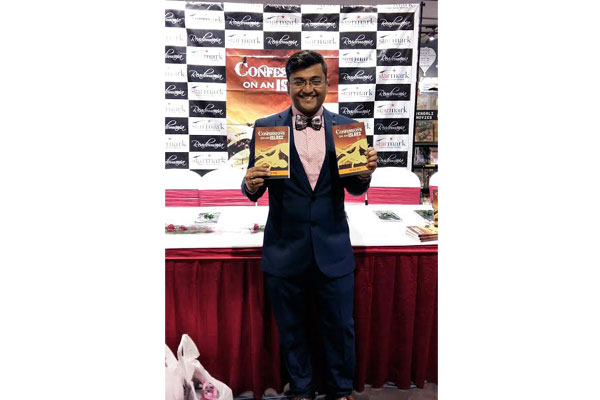 India Blooms News Service | | 14 Dec 2016, 01:56 pm
#AyanPal, #ConfesssionsOnAnIsland, #ToastMasterAyanPal, #Readomania
Kolkata, Dec 14 (IBNS): An extraordinary psychological tale where an island takes the narrative ahead, where storytelling is like a game of Russian Matryoshka Dolls â€“ with stories nesting within each other, where the storytellers are consumed by the power of imagination and truth, are a few things that set apart author Ayan Palâ€™s solo debut novel.

The author’s guests and the audience, who were already familiar with Pal’s penmanship, hailed the innovative style of writing at the book launch held some time back at the Starmark bookstore in Kolkata’s Quest Mall.

Titled Confessions on an Island, the story revolves around an abducted woman, a best-selling author, trapped on an island, whose only chance to escape lies in telling stories emerging from the stories that her intriguing abductor tells her. Clueless about why she is being forced to participate in this game, she decides to play along, even though the stakes are raised gradually.

And if you think you have got a hint about the ending, when the back cover blurb says “soon the only way out is in – into the past, heart and mind,” you are part of the jigsaw puzzle.

Like the island you have to wait ‘to see how it all pans out’ and finally see for yourself ‘how this story ends’.

Suchandra Chowdhury, lyricist, actress and former programme executive of Doordarshan rightly said, “A man, a woman, a beautiful South East Asian island – a backdrop that is perfect for a Mills and Boon romance. But here lies the difference. The promising and talented young author Ayan Pal doesn’t walk the beaten track, instead he gifts his readers a well-crafted spine-chilling story.”

As an author, Pal is known for his short stories in the Aamzon bestsellers Chronicles of Urban Nomads, 21 Tales to Tell, and When They Spoke. He has also contributed to India’s first composite novel, Crossed and Knotted, Upper Cut, Her Story, Rudraksha, Arranged to Love, Tonight’s the Night, and Long Story Short.

A Kolkata-based IT professional, author Ayan Pal has received several accolades in his career so far. His book has been a record holder in the Limca Book of Records. He has earned the title of Distinguished Toastmaster from Toastmasters International. He has won two Brandon Hall awards.

Confessions of an Island has been published by Readomania.