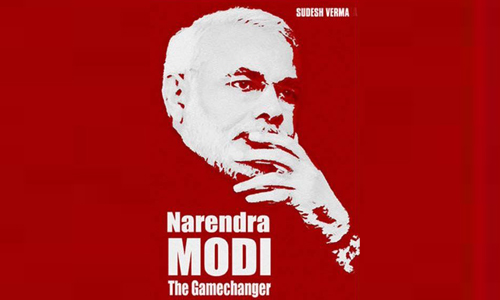 Suddenly the book market is flooded with books on Narendra Modi, who till the other day was media’s whipping boy. The spectacular mandate has overnight transformed the new prime minister of India into media’s poster boy. Unconfirmed figures suggest there were more than 105 books on Modi-- written by various authors in varying styles -- that hit the stalls recently. Yet, Narendra Modi – The GameChanger, is one of the more authentic books on the subject.  While it cannot be termed as an authorised biography, the book is based on numerous interviews with Modi and his relatives, friends and his critics. “The 400 plus pages talk about the inspiring stories that made Modi what he is today- how he evolved as a man of development and empowered people with his decisions, and how he faced the poison laced barbs of his critics who were ready to tear him to pieces for a crime he never committed”, the blurb of the book says. The author has used Nanavati Commission’s report, the report of the special investigation team and various newspaper reports of 2002 to argue that Modi was not guilty but became a target of vested interests determined to paint him as a villainof the 2002 Gujarat riots. Yet, the author – a veteran journalist,  is not judgemental but leaves the judgment on readers after building the case. As for example he quotes member of All India Muslim Personal Law Board, Mufti Aijaz Arshad Qasmi who says that “more adverse riots had taken place in the country.” One of the staunchest critics of Modi, filmmaker Mahesh Bhatt, has been quoted as taking a ‘U’-turn vis-à-vis Modi. Bhatt is rather critical of those who make a living on opposition to Modi. The author narrates the events that forced a rethink on three important Muslim leaders- Zafar Sareshwala, who was planning to drag Modi to the International Court of Justice; Asifa Khan, who was a Congress leader; and, Asma Khan Pathan whose entire family has been in the Congress. All three are now the most vocal advocates of Modi. One must read the book to understand this transformation. Part one of the book deals with Modi’s early life and the circumstances that forced him to sell tea to train passengers at Vadnagar railway station. He would sit in the class with one ear trying to catch the whistle of the train so that he would rush to the railway station and reach there before the train could arrive. Modi has tried to settle the controversy over his marriage by declaring Jasodaben as his wife in the election application. The government has provided her security as well. However, the controversy could not die for those who want to know the fact. This is one of the rare books that deals extensively with Modi’s marriage. The author does not take a stand but presents the situation in graphic details. The readers are left to make their own assessment. The second part of the book deals with his baptism in the RSS and politics during emergency and later when he formally joins the party (BJP). It was not a smooth ascendency to the Chief Ministership but a roller coaster ride that produced gloomy moments for the man who wanted to work for the society and be at least a footnote in history. The book outlines this journey in a sympathetic way. Most readers find tough to understand economics. But the chapters on development are written in the form of stories in easily understandable language far away from the jargons of micro economics. Through the numerous stories one learns how the State actually made development possible. Those interested in knowing what Modi would do with the bureaucracy at the centre should read the book to understand how Modi tamed the powerful bureaucracy of Gujarat and the image of corruption that most bureaucrats had. The last part of the book showcases why Narendra Modi is a Game Changer. It lists various incidents that Modi turned his way and achieved success from the jaws of defeat. The use of hologram technology in campaign during the assembly elections in 2012 was another game changing event that brought new life to campaigning. Modi used the technology to his best advantage. While one cannot find fault with the fact presented in the book and may not have much problem with the arguments either, he could have been a little critical. After reading the book one may take Modi to be a demi-god without any flaw. The fact is that he too is human and must have committed the sins so common in politics. There are many people who claim to have been sidelined by Modi those events have not been given.       One can understand the limitations. However the author is candid to admit that he has tried to present a better understanding about the man who was to become the prime minister. The author is also clear that he was not writing for either critics or his media friends. He wanted to present the real Modi before the common man. For the ever growing Modi fan club, this book could be a valuable collection.   (The opinion expressed in the review is of the writer, a senior New Delhi-based journalist and not of IBNS)