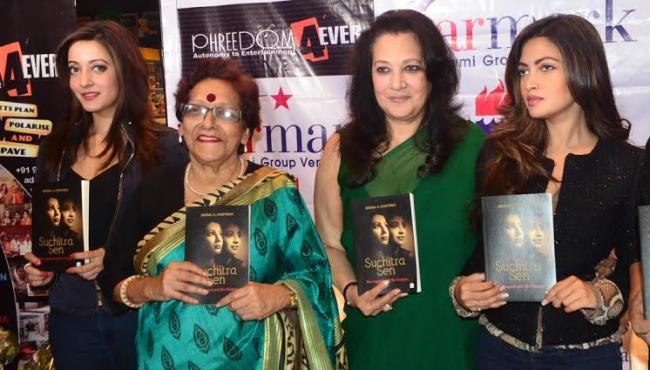 India Blooms News Service | | 23 Jan 2016, 09:55 pm
#Moon Moon Sen, # daughters unveil book on Suchitra Sen
Kolkata, Jan 24 (IBNS): In her lifetime and even after her passing away, screen diva Suchitra Sen remained an enigma for generations of cine-goers. Now a new book in English by senior journalist Shoma A Chatterji explores the career and works of the film legend.

Late cine legend's daughter, actress-turned-politician Moon Moon Sen and her daughters-Riya Sen and Raima Sen (both actresses)-  unveiled  Chatterji's book 'Suchitra Sen The Legend and the Enigma' at lifestyle store Starmark in Kolkata on Wednesday last. The event was anchored by filmmaker Sudeshna Ray. Starmark in association with Harper Collins Publishers, India launched the book at the Quest Mall outlet of the lifestyle store.  Raima Sen, the grand daughter of Suchitra Sen, at the launch said: "I am waiting to read the book and as far Shoma-di [writer Shoma A Chatterji] is concerned I can just say thank you. It is an honour and I'm glad to be here and celebrate my grand mother's life." Moon Moon Sen said: "It's a very intelligent book and people will study it, but of course I wanted a coffee table,book too."     (Reporting by Anusree Ghosh)