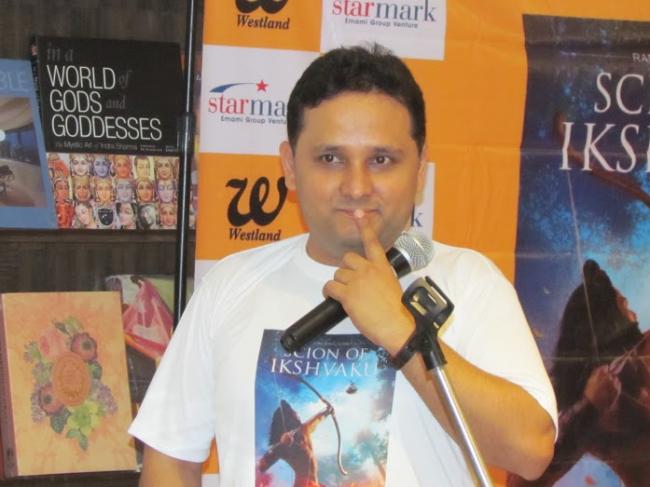 The author’s new book, ‘Scion of Ikshvaku’, the book one of the newly launched ‘Ram Chandra Series’ was released in Mumbai on June 22.

In a spectacular entry,  a quartet arrived in the area with drums of various sizes, drumming, playing a catchy old beat.

Amish entered few minutes later, a drum tied to his waist, drumming rampantly, fist pumped in the air and with an occasional chant of ‘Har Har Mahadev’ and ‘Jai Sree Ram’.

Amish unveiled the book along with four of his youngest readers, all from Kolkata with the youngest being eight.

When asked about ‘Somras’ (an anti ageing drink in his Shiva Trilogy books) and if he really believes in its existence, he said, “Well to be honest I don’t really know. Even if I do I won’t be able to prove it, but all I can say is that science is taking a giant leap and who knows, maybe within the next fifty years something similar will emerge. A research is being carried out by genetic engineers to see if they can control ageing and I can tell you something like that will happen. But the main question is what we will do with the extra hundred years that science will give us. I have also heard that there is a team researching about mind reading. Aren’t these qualities akin to Gods? Are we truly ready to be God?”

On being quizzed about Kolkata and the one thing he loves here, Amish told IBNS: “I love coming to Kolkata and I specially love the ‘mishti doi’ (sweet curd) here.”