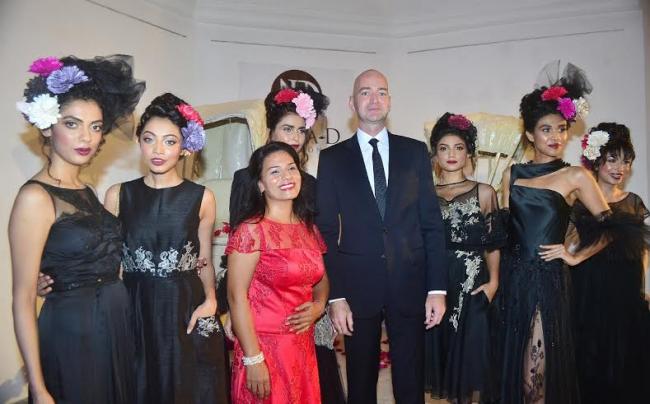 British Deputy High Commissioner in Kolkata  Scott Furssedonn-Wood, formally launched the Neeva-D London brand at a fashion show inspired by the British-Bengal era and in the presence of foreign consuls, eminent dignitaries and guests.

A new fashion catalogue and a website (www.neeva-d.com) of Neeva-D London was unveiled on the occasion by  Scott Furssedonn-Wood. The high point of the evening was a fashion show of the Neo Colonial collection.

“The UK is a global leader in fashion design. That strength comes from the dazzling creativity of our designers and the rich variety of their inspiration. Neeva-D London is a great example of that, drawing influence from the designer’s Indian and British roots to create a remarkable collection that I am proud to help launch here in Kolkata,” said  Scott Furssedonn-Wood, British Deputy High Commissioner in Kolkata.

“The `Neo Colonial' collection, inspired by the days of The Raj, is like bridging two different eras of Europe and India through high fashion, using intricate artistry of laces and nets to present in its modern avatar a line of chic classy collection for women. Neeva-D London collections are not only made-to-measure but also made-to-concept, wherein, the personal qualities and preferences of an individual are factored in to customize her lifestyle,” said fashionista  Neeva Debnath who is, after London and Kolkata, keen to take her fashion to the other metros of India. “It is like coming back to my roots in India and Bengal,” she added.

Multiculturalism is the hallmark of Neeva-D London and combines the best of the European and Indian craftsmanship and designing concepts like layering, mix and match wearable, smart necklines, minimal embroidery and light embellishments which greatly increase the comfort quotient and makes her designer wear very voguish and classy at the same time. One cannot miss out on the influence of Jane Austen on Neeva. Each of her work is fondly named after famous women characters – Isabella, Elizabeth, Charlotte and so on. Her Bengali or `Bong' connection is amply reflected in her collections, reminiscent of the women from the Tagorean era.

A fashion graduate from Bristol, UK,  Neeva's stints as a creative designer with prestigious fashion houses in UK and Europe such as French Connection, Monsoon, C&A, Nicole Farhi and Notice Me helped hone up her skills as a fashion designer and gain valuable insights into the world of high fashion in Europe.   Neeva also had a highly successful spell as an International fashion consultant at the National Institute of Fashion Technology (NIFT) in India. She had also been a faculty member at NIFT.

“My learning has been mostly experiential, first growing up as a child in a family of fashion aficionados in Kolkata and later as a professional in UK. That way, I am blessed with a dual heritage and I am a flag bearer of multiculturalism which is expressed through my fashion statements,” said  Neeva.