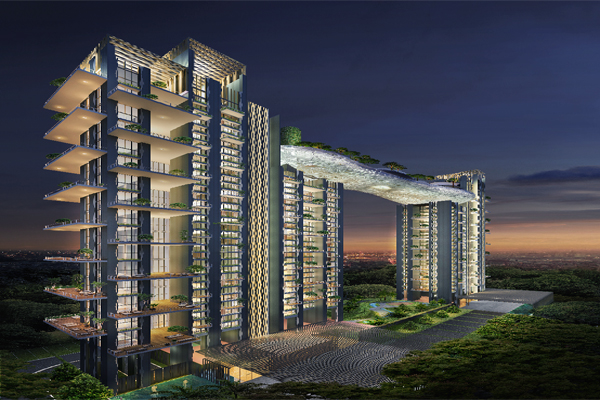 ‘Deya’ which means ‘cloud’ in Bengali has been designed like a floating sculpture in the sky.

The structural design of this project has been done by world renowned Hossein Rezai Jorabi of Web Structures from Singapore.

The structure and form of the Deya is a milestone in the evolution of modern building structures and a first for India.

Suspended between the twin towers of the project ‘Atmosphere’ and visible from far and wide, the Rs. 150 crore ‘Deya’ creates a landmark for the city and puts Kolkata on the world map of iconic buildings.

Atmosphere, a new architectural icon in India, is a Rs. 800 crore luxury residential condominium project consisting of two tall towers which will currently be the tallest in Kolkata. The towers will feature villas in the sky with large private terraces and gardens for each unit.

On the sidelines of the lifting of ‘Deya’, Rahul Saraf, MD, Forum Projects said, “The most picturesque feature of Atmosphere is the amorphous shape-shifting, tubular piece of floating sculpture called "Deya, which is hanging between the two towers. Some of the renowned global experts have contributed to the creation of this iconic project and we are sure that this will put Kolkata and India on the international map in the luxury real estate sector.”

Sitting 100 metres high, ‘Deya’ will have a width of 100 metres. With four levels, the highest being the party deck, it will serve as a community space, and both its interior and ‘outer’ skin will be put to use.

It will command a 360-degree view of the wetlands stretching before it and will feature multiple swimming pools, a gym, spas, a squash court, a basketball court, a putting green, simulation golf, games rooms, a jogging track, a mini cinema hall, a banquet hall, a state-of-the-art boardroom facilities, an open-air party deck, an amphitheater, and multiple lounges and spaces for smaller gatherings.

All these are only meant for the exclusive use of the 80 families that will reside in Atmosphere.

Commenting on the special, Karan Tandon, AVP - Ad sales and Partnerships, FOX International Channels said, “For a residential structure to be called a Superstructure is truly saying a lot about its grandeur and magnificence. The Atmosphere is a new architectural icon in India and a great complement to our Superstructure series.”

The steel structure is clad with a perforated metal façade, comprising 1.5 metre wide angular panels and covering a total area of 5000 square metres.

The façade is designed for high wind speeds and is rendered with ‘cloud like’ aesthetics. Fabrication and installation of these panels is being done by Mero Structures from Germany. There are 15,000 circular metal discs attached to its façade.

“When one is driving around the city, or looking at Deya from different parts of the city, its’ form will seem to be changing constantly. Similarly, as the sun moves in the sky, Deya will appear different, sometimes solid, sometimes translucent and sometimes even a notion of being fluid. It will be just like a cloud which has no particular form or character”, Saraf added.