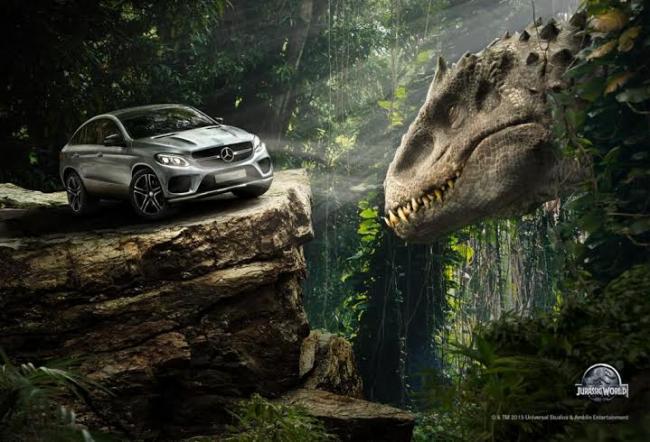 With the film "Jurassic World" Universal Pictures and Mercedes-Benz are continuing their long-term partnership. In 1997, Mercedes-Benz M-Class made its first official appearance in the Hollywood Blockbuster 'The Lost World: Jurassic Park'. The partnership continues the relationship between Universal and Mercedes-Benz after 18 years, when another Mercedes-Benz car will debut in a significant role in the latest installment of the groundbreaking Jurassic Park series named Jurassic World - the new GLE Coupe.   Mercedes-Benz India will be launching a high decibel marketing campaign marking Mercedes-Benz’s association with the much awaited movie. It is of great interest that some Indian locations are home to the original dinosaur relics from the Jurassic era. India also has one of the highest reserves of dinosaur relics across the world. The marketing campaign is developed considering this extreme rarity and also its direct connect with the movie. A detailed promotional plan has been developed for the GLA. Promotions will be carried out across TV, print, digital and on ground. As part of the retail promotions, Mercedes-Benz India will be organizing exclusive premieres in some markets for the customers. For Indian fans, Mercedes-Benz has introduced a unique opportunity to experience the Jurassic World touch. Customers can test-drive the stylish SUV GLA and lucky winners will stand a chance to drive the GLA to the Jurassic relics. This experience will closely emulate the mood of the movie ‘Jurassic World’. This fourth installment in the series will feature appearances by five different models: the GLE Coupe, the G-Class SUV, the Unimog heavy-duty truck, the Sprinter van, and G63 AMG 6x6. During their adventures in the jungles of Jurassic World, the characters played by Chris Pratt and Bryce Dallas Howard put their trust in the off-road capabilities of various Mercedesâ€‘Benz vehicles.  Eberhard Kern, Managing Director and CEO, Mercedes-Benz India stated “Mercedes-Benz has a long tradition as a sought-after partner of the film industry, both nationally and internationally. Our vehicles stand for safety, performance and distinctive design and also effectively implement the brand attributes related to desirability, emotion, admiration, joy, validation and fascination to the audience. Jurassic World is one of the most awaited movies of 2015 and what makes this moment truly special is our association with the popular franchise. The sporty and restless GLA will be the luxury ride for a one of a kind experience to the Jurassic relics of India. We are continuing the excitement here for our Indian fans.”   The five different Mercedes-Benz models in the movie - GLE Coupe, G-Class, Unimog, Sprinter and G63 AMG 6x6 to escape  dangerous situations, maneuvering through the island and evading the a great number of dinosaurs. The Mercedes-Benz vehicles are best suited for the action in Jurassic World, bringing authenticity and realism Jurassic World will be released on June 11 across cinemas in English, Hindi, Tamil, Telugu and Bengali in India.