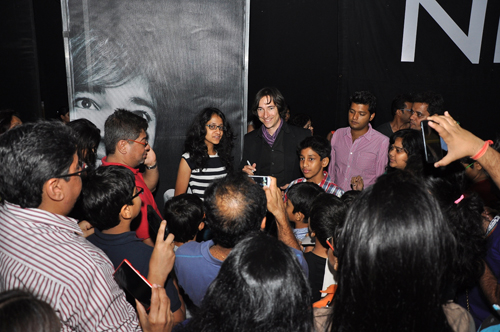 He made an effortless breakthrough with his distinctive brain teasing acts, adding radiance to the show.

Speaking about the successful event, RJ Malishka, 93.5 Red FM star, tweeted, “N I totally recommend that the next time Nicolai is in town u watch Him esp his turn- back-time act! Whoa!”

Moreover, amazed by Nicolai’s performance, popular blogger @Ghaatidancer also tweeted, saying, “What an amazing experience at the Nicolai Friedrich show! Thank you @agpworld, for the invite!”

Nicolai invited some of the audience on stage as volunteers. Kids and grownups were seen mesmerized with his act.

He led the spectators with his magical demonstrations, influencing their thoughts and ideas.

Post the show; fans clamoured backstage waiting to catch a glimpse of Nicolai, while others tried striking a conversation with him, recognizing his talent.