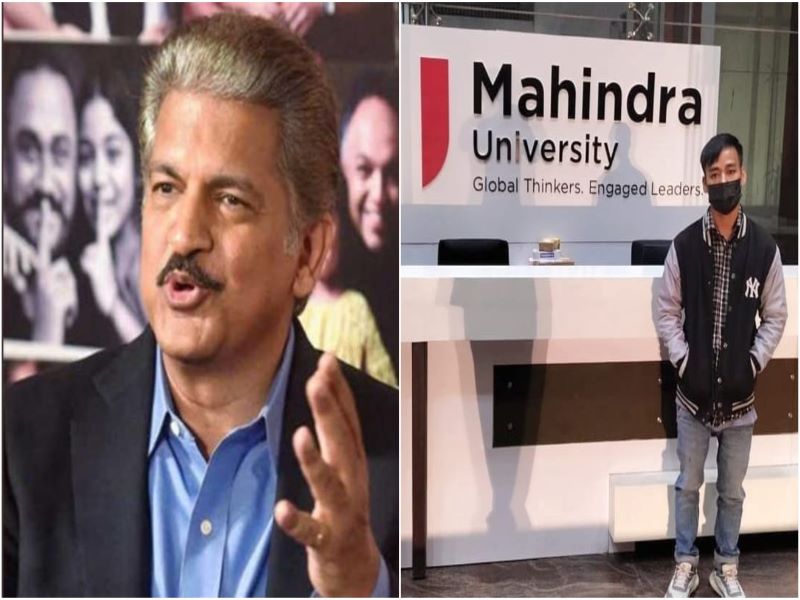 Anand Mahindra delivers on his promise; sponsors education of Manipur boy who made 'Iron Man' suit with electronic waste

Anand Mahindra had expressed a desire to help Prem with his education after learning about his financial hardships.

Prem had made headlines after he recreated the Iron Man suit with electronic waste despite his lack of formal training.

Move over Tony Stark. Make way for the REAL Iron Man. And it would be a privilege to assist him & his siblings in their education. If someone can connect me to him, it will be a privilege for me & @KCMahindraEduc1 to support him. (🙏🏽 @jaavedjaaferi for forwarding the video) pic.twitter.com/sKs8V3H8xQ

On November 16, Mahindra took to Twitter to confirm that Ningombam has reached Mahindra University in Hyderabad to study mechanical engineering. He also thanked low-cost airline IndiGo for taking good care of him.

Remember Prem, our young Indian Ironman from Imphal? We promised to help him get the engineering education he wanted and I’m delighted to share that he has arrived at @MahindraUni in Hyderabad. Thank you Indigo for taking such good care of him.. https://t.co/7Z6yBi39yi pic.twitter.com/Hw7f0c5lGW

IndiGo thanked Mahindra, and wrote: "The pleasure is all ours! We can't wait to see him back on-board with us soon!"

The pleasure is all ours! We can't wait to see him back on-board with us soon! 😊💙 #LetsIndiGo #RisingChamp https://t.co/32XN08Dd6q

In an Instagram post, Prem thanked Mahindra for sponsoring his education and providing him all the required support.

"Their foundation (Mahindra Foundation) provide me everything I needed and took care of me as well," he wrote, alongside two pictures from the university.

He also said that a driver was sent to the Hyderabad airport to drive him to the university campus.

Ningombam thanked Team Indigo for their hospitality and said that they arranged a special seat for him.

Within 10 days of discovering him, Mahindra reached out to the Fine Arts student to understand his future plans and desires and sent one of Mahindra's auto sector partners in Imphal, Shivz Autotech, to speak to him.

I had tweeted about Prem, the young man from Imphal who used scrap material to build an ‘Iron Man’ suit. I was keen to support his obvious talent & I’m grateful to our Auto sector partners, Shivz Autotech in Imphal for visiting Prem & his family to understand his desires. (1/3) pic.twitter.com/i7RQLXUl6E

I am awestruck & inspired by Prem’s ambition & skills that have flowered despite—not because of—his circumstances. Many of us from privileged backgrounds never appreciated enough the resources we were given. But Prem uses scrap material & basic tools to shape his creations (2/3) pic.twitter.com/YGCjyooCpv

Prem learnt to make the 'Iron Man' suit based on his knowledge from Hollywood films and the Internet.

Financial hardships forced him to look for alternative material to build the suit. He utilised electronic waste and metal scraps for the armour, and cardboard for the rest of the body. This took him nearly five years and finally in 2020 he was able to post videos of the armour, which drew tremendous applause on social media.

After this he started building other other droids, inspired by Hollywood movies. He exprssed desire to sell his creation and fund his siblings' education with the earnings.