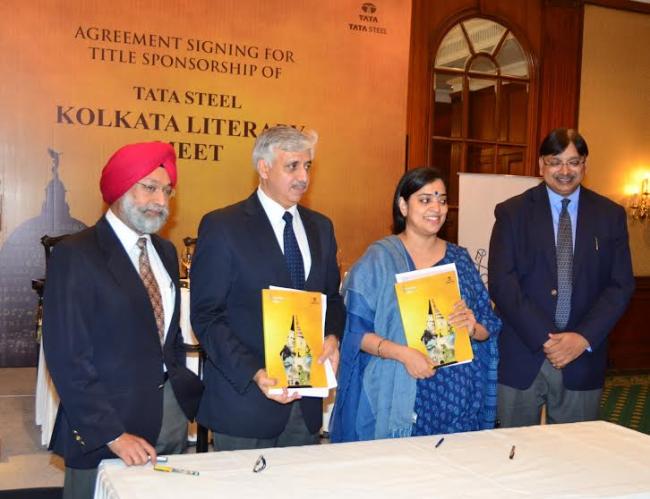 Tata Steel to be 'Title Sponsor' of Kolkata Literary Meet

The event is held every year in Kolkata in association with Victoria Memorial.

Tata Steel’s association with the Kolkata Literary Meet is in alignment with its corporate philosophy of encouraging and supporting organisations and initiatives that aim to foster and encourage intellectual and cultural pursuits in society, the company said in a statement.

Speaking on the occasion, Chanakya Chaudhary, Group Director Corporate Communication & Regulatory Affairs, Tata Steel said: “Kolkata has traditionally been intellectually and culturally vibrant. The city regularly hosts some of the most widely acclaimed cultural, musical and literary events held in the country. We are proud to support the Kolkata Literary Meet that bears the essence of what the city is all about”.

Peeyush Gupta, Vice President  -- Steel (Marketing & Sales), Tata Steel, said: “The Kolkata Literary Meet has been a signature event of the city and Tata Steel is humbled and privileged to be associated as the title sponsor. This confirms the Company’s endeavour to bring best-in-class experience to citizens of Kolkata and provide a knowledge platform to distinguished literary minds of the society”.

The Kolkata Literary Meet 2015 will be held at the premises of the Victoria Memorial during January 23-27.

The event will witness the coming together of luminaries from the literary world, thinkers and opinion makers. The Literary Meet will provide a platform for book reading sessions, discussions, debates, interactive workshops and cultural performances.

While the legendary Ruskin Bond will inaugurate the Kolkata Literary Meet and talk about his life and works, former Prime Minister Manmohan Singh’s daughter Daman Singh and author of `Strictly Personal’ will speak on her tryst with literature.

Jaya Bachchan will participate at a session at the Kolkata Literary Meet even as veteran actress Shabana Azmi will read out translations of Rabindranath Tagore’s works by her husband, renowned lyricist and scriptwriter Javed Akhtar.