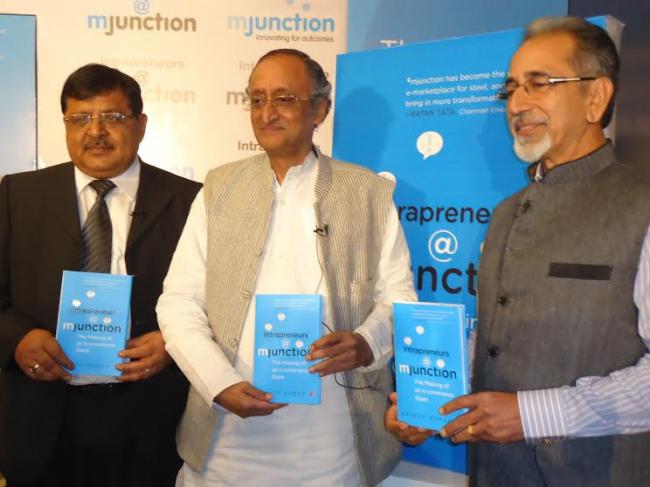 mjunction has played a key role in the field of e-commerce in the eastern part of the country, especially of course in West Bengal, where it is headquartered.

The hugely mineral-rich part of this country was plagued by non-transparency with middlemen clogging the system.

The steel and coal supply chains, especially, were victims of extreme cartelisation and muscle power of the coal mafia.

With online competitive bidding, mjunction brought in efficiency and transparency into the way steel and coal were bought and sold in India till then. mjunction's sourcing and procurement services have also contributed significantly to efficient procurement processes through reverse auctions and offline negotiations.
Dr Rajeev Kumar, a senior Tata Group corporate communicator has captured the story of mjunction, both from the historical as well as entrepreneurial perspectives.


mjunction, the then metaljunction.com, was floated at a time that the dotcom bust happened.

The founder CEO and MD Viresh Oberoi, who has led the company since inception, however, turned it into a success story through sheer innovation and determination.

Oberoi said:“Intrapreneurs@mjunction is to me, on the one hand, a story of a few determined people wanting to change the world - make a better place - through their passion to succeed, leveraging and harnessing the power of the Internet, and on the other hand, having a great time doing it. Putting the two together, that is, successful creation of a for-profit social organization and the joy of creating and managing it, indeed makes a heady cocktail.”


Mitra said: “The spirit of coopetition, or cooperation between competitors, is indeed a unique concept, specially between the public and private sectors, where interests are different and networks are different.” He said for an intrapreneur, a mix of intuition, analysis and market sense is most crucial and the team at mjunction with Mr Oberoi leading it, has that in ample measure.


Mitra said: “The easiest thing in business is gap-filling. The second, which is a little more difficult, is to complete markets. However, the third, and the most challenging, is to create markets when none exist. mjunction belongs to this third category. To move from Tata Steel to step into complete alien territory was indeed a brave act by Mr Oberoi, and I think the author has done a great job of elucidating the entire journey.”


“I am here to celebrate the spirit of intrapreneurship,” he added.


Kumar said, “The team at mjunction created the paths to winning by identifying and capturing opportunities quickly. mjunction captured new lines of businesses decisively even before the previous ones were fully stabilized, and kept jumping from one transient advantage to another.”


On social media, the book is being covered under #MjunctionStory.