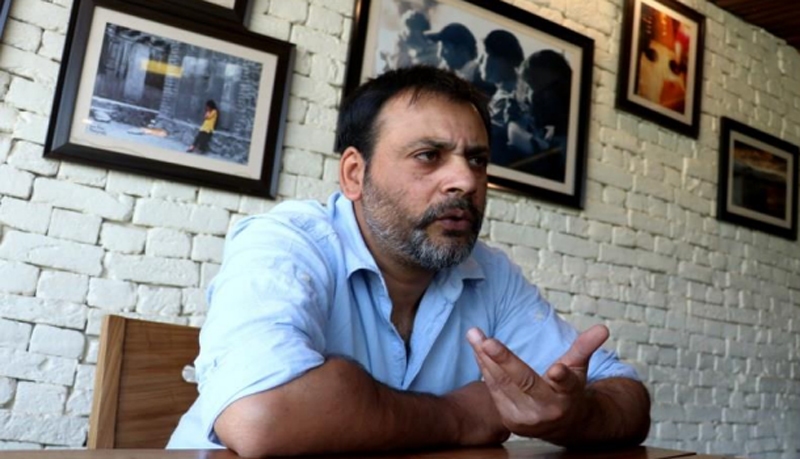 Srinagar:  As he strolls brush over canvas, mixing colours from the palette at regular intervals, many thoughts run across 40-year-old Nabeel Sultan’s mind.

While painting a confluence of visual scenes into a final landscape painting, Srinagar-based artist and photographer Nabeel points out to his strong lineage of art – thanks to his late father and celebrated artist of Kashmir Shujah Sultan.

From securing a Bachelor’s degree in Information Technology to doing professional modelling and now being a visual artist, Nabeel has truly come a long way.

Ask Nabeel how it felt like growing up in the house of a renowned artist and pat comes the reply: “I spent my childhood walking in and out of my father’s workspace. The memories of colours and brushes remain deeply etched on my mind.”

It was in 2007 that Nabeel had to cut-short a promising career of modelling in Delhi and Mumbai to attend his ailing father back home.

The homecoming however was full of challenges until Nabeel found his creative satisfaction in doing art work.

He quite literally picked it up from where his father had left. Nabeel began using the material left behind by his father at the workstation where late Shujah Sultan painted some mesmerising images for years.

“As a model, I did photo shoots for popular designers and brands in Delhi and Mumbai. I worked as a model for a French company but life took a turn as soon as I came back to Kashmir. There were plans that I should set up a readymade garments showroom but eventually landed up in Uri running a plaster of Paris factory for five years,” says Nabeel.