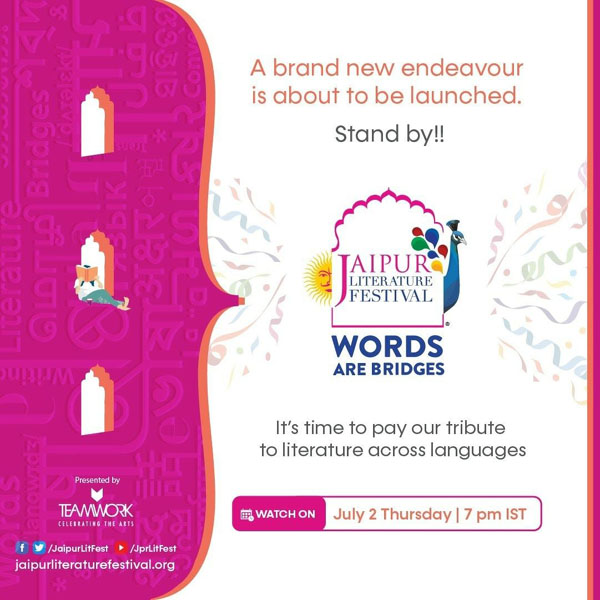 Get ready for a brand new literary festival, ‘Jaipur Literature Festival – Words are Bridges’, commencing on Thursday, organised by Teamwork Arts in collaboration with HarperCollins India.

Teamwork Arts, producer of the iconic Jaipur Literature Festival, the multi-continent JLF and the recently-launched JLF Brave New World, announced this new online literary initiative to celebrate the diversity of languages from India and the literature they spawn.

The first season of the series will concentrate on the treasure trove of literature in Indian languages and their translations in English, the organisers said in a release.

Sanjoy K. Roy, managing director of Teamwork Arts, said, "Stories connect us to a notion of home and culture. In India, our vast linguistic diversity with over 23 official languages and hundreds of dialects are bound together by common threads of philosophy and tradition. Translations are a life-line revealing the richness of form and beauty of nuance inherent in language. ‘Jaipur Literature Festival - Words are Bridges’ celebrates this rich narrative diversity of a region in a series of sessions bringing together the best writers and their translators from across India, in association with HarperCollins India."

The series curated in partnership with publishing house HarperCollins India will be telecast every Thursday, commencing from July 2, 2020.

Udayan Mitra, Publisher - Literary Division, HarperCollins said, “At HarperCollins India, we always watch with delight at words becoming bridges, as the books that we publish introduce readers to worlds often unknown to them. This is especially true of a translation which wonderfully connects cultures through the written word. Today unfortunately, readers and writers are feeling more isolated than never before. ‘Jaipur Literature Festival – Words Are Bridges’ is a lovely initiative to connect us all over again. We, at HarperCollins India, are really excited to be a part of this program with Teamwork Arts.”

The first series of eight conversations will showcase eminent writers and noteworthy translators across languages such as Bengali, Assamese, Hindi, Punjabi and Kannada.

The series will host sessions that feature readings in languages followed by English translations and conversations between the writers and translators.

Preeta Singh, President, Teamwork Arts said, “Language makes culture truly accessible. In India, discovering the best in literary and linguistic traditions is lost to many and the ‘Jaipur Literature Festival – WORDS ARE BRIDGES’ is committed to harness the richness of Indian language-literature for audiences and brands that wish to embed themselves in the diversity of Indian culture. We value Harper Collins India’s partnership in this discovery.”

The series will feature some of India’s reputed authors and their works.

The list starts with Joy Goswami, one of the most powerful poets of Bengal and among the best in the post-Jibanananda Das era of Bengali poetry, in the session ‘Translating Joy’.

In conversation with his translator, the poet and fiction writer Sampurna Chattarji, and poet, art critic and cultural theorist Ranjit Hoskote, Goswami will discuss the source of his inventive, enigmatic and visionary verse.

On April 13, 1919, twenty-two-year-old Nanak Singh joined a mass of peaceful protestors agitating against the Rowlatt Act at Jallianwala Bagh in Punjab.

It was a life-changing experience for him: he survived the massacre unleashed by General Dyer’s troops, and left unnoticed among the hundreds of corpses.

His poem about the traumatic event – Khooni Vaisakhi – was banned soon after its publication in May 1920.

At a session on Nanak Singh's book Khooni Vaisakhi, Navdeep Suri, Nanak Singh's grandson, will talk to noted poet and journalist Nirupama Dutt about rediscovering this poem and translating it after sixty long years.

The session will have a special musical rendition on Nanak Singh’s poetry by much-loved singer Harpreet.

Ranjit Desai's Shriman Yogi about the foundation of the Maratha Empire and the life of its charismatic founder, the great warrior Shivaji, is a beloved classic in Marathi literature.

In conversation with author and translator Rita Kothari, the prolific translator Vikrant Pande will speak about giving Ranjit Desai a new voice in English and about the continuing relevance of Shivaji, at the session, ‘Shivaji: The Great Maratha’.

Arupa Patangia Kalita's fiction is a chronicle of the disturbing and searing history of the decades-long aggression and hate that plagued Assam.

In conversation with her translator Ranjita Biswas, alongside author Aruni Kashyap, she will speak about the overpowering beauty of the landscape of Assam, the conflict that scarred it, and the role of the writer in fraught times, at a session titled ‘Written in Tears’.