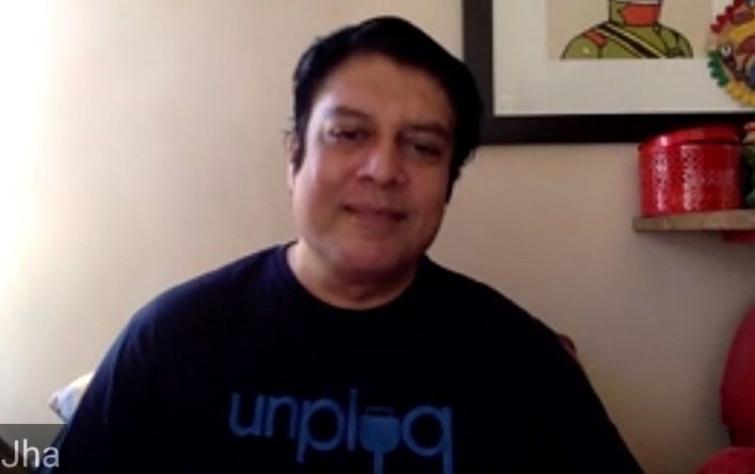 Girls of Mumbaistan result of my understanding of women: Author Piyush Jha

Filmmaker-author Piyush Jha was the guest at the latest edition of An Author's Afternoon presented by Shree Cement Ltd and organised by the Prabha Khaitan Foundation in May. Jha during an online conversation with filmmaker Arindam Sil spoke about his latest book Girls of Mumbaistan, women, transgender and his genre of crime-fiction. India Blooms correspondent Souvik Ghosh brings excepts of the conversation

Currently we are in a situation where interactions are taking place through a virtual world. This is the way we are having to lead our lives now. Would you like to say something about this unnatural situation?
Actually I was looking forward to being there in Calcutta (Kolkata) on Mar 17. We had to call off because the flights were then getting cancelled because of Coronavirus (spread of Coronavirus). Then within few days, we had the lockdown. We all know where we are right now. I actually feel I missed the opportunity to be with all in Calcutta. I was actually looking forward to it because I really like Calcutta and I have had a very good experience of being in the city in my creative sphere.
We want to talk about writing in English. Do you write in English because you are comfortable in the language or you like to reach out to a bigger mass?
I am comfortable in English because I have been educated in the language as a medium of instruction. I speak in Hindi and also make films in the language, so I am bilingual like most people. I also made a film in Urdu.
{image_3}

Who is your most favourite Indian writer who writes in English?
Amitav Ghosh is one of my favourites. Although I must say one of the least famous books of Ghosh, The Calcutta Chromosome, is one of my favourite books. So yes, he (Ghosh) is one of my inspirations. Then Upamanyu Chatterjee was a kind of an inspiration for me to write in English language. All of us have written in college magazines and all so we are used to expressing ourselves in English and that's the laws of the nature of the business we get into.
I was (also) making ad (advertisement) films in English and Hindi which were translated in six to ten languages. So we were used to working in multiple languages. After a point of time, I realised that Indian English idiom has emerged. So I used some Bombaiya (prevalent in Mumbai which was earlier called Bombay) idioms as well as South Indian terminologies within the language depending on the characters and locations.
Do you target Indian-specific readers while writing?
It is true that I write for the Indian reader because I feel I should appeal first to the people around me. The people around me would be my core audience.
Most of your crime books are city-based. Is it because you know the cities very well or because you think the city-based crimes are more complicated than the one committed in rural sides?
I am from Mumbai and I know the streets (of the city) like the back of my hands. Moreover I wanted to write a sort of a book or a story which was an ode to my city because I saw the changes within the city. Perhaps all the changes were not good but wanted to kind of capture the essence of the city and as a creative artist one can only do that with whatever is available to you.
{image_2}
So I used my imagination and experience as a Mumbai boy and Mumbaikar to capture that within the pages of my book. I sort of tried to put in Mumbai in such a way that it becomes a character. If I was living in a rural area, I probably would have tried that. However, it is important to capture the essence of the location that you are locating your creative work in.
Since you are a filmmaker, do you keep cinema in mind while writing novels?
I have a way of viewing things because of my love for and exposure to cinema. Whatever I think is quite visual and when I capture it in words, it ends up sounding visual and quite vivid. So it's just the way I have become. Perhaps if I have not been a filmmaker, my writing would have add a different sense because of the various medium that one is exposed to.
You are specialist in writing thrillers. Any favourites you have?

In the past, I have read people like Frederick Forsyth, James Hadly Chase, Sidney Sheldon, Jeffrey Archer. And in the recent times, Jo Nesbø, Gillian Flynn, Stephen King are the ones whose books I read. I am always exploring and experimenting but these are some of my favourite ones. I also read Feluda while growing up.

Any favourite thriller filmmaker?
David Fincher would be one of my favourites. He does so many genres but he is incredible in thrillers. Apart from him, my favourites are Christopher Nolan and of course the grand master of all, Alfred Hitchcock.

The lockdown period has fostered the growth of OTT platform. Also a lot of web series or cinema showing the dark sides of human nature have became popular. Do you think we love to watch the dark side of our characters? Why do we watch these according to you?
To me the essence of a crime-thriller of crime-fiction is the talking about the society's ill. A crime-thriller filmmaker or a crime-fiction detective writer talks about things which have gone wrong in the society within the lives of people and how they can be corrected. Obviously the ills of society is an obsession of every crime-fictional writer who is always looking to bring that out and provide a sense of catharsis to the reader.
You had women protagonist in the two parts of Girls of Mumbaistan which is a novella. Sadly we have lesser women protagonists in Indian cinema. So while you chose women protagonist, you had any fear?
True. Female protagonist is not popular in this country. Perhaps it's because of the society that we have and may be I have been also kind of responsible to not look into it previously. I was not aware of it. My first three novels were very much male-oriented. It was only in the fourth novel, I had started using female semi-protagonist or antagonist depending on the way we look at it.
{image_5}
After the fourth novel, which was Raakshas: India's No. 1 Serial Killer, I started getting interested in exploring this (making female protagonists) further. So my next novel took a little bit of time to arrive at what I really wanted to do. But I really wanted to go back and kind of understand how certain things affect women in our country and how people take advantage, how women can be deceived and how they get themselves out of that deception. So that was something which I began to explore and the result is Girls of Mumbaistan. I have not stopped only at women but also I have portrayed a transgender in the third novella.
Tell us about the portrayal of transgender in you novella.
I always wanted to write about transgender community, specifically the Hijra community. I have grown up in Mumbai so I have grown up with the Hijra community as a part of our daily lives around us and I always wanted to kind of reflect something about their lives but I didn't know what to do because most of the time I read about the atrocities faced by them. The atrocities which they face is absolutely true but then to me it was important to understand where do we go from here.
{image_4}
Given that the Hijras face atrocities, I always thought how can my protagonist rise above this. Then I started seeing that the Hijra or transgender community has been legally accepted in various government jobs. When I started exploring that, I found there were two police people from the transgender community who have been absorbed in the police service, one in Rajasthan and the other in Chennai. Mumbai doesn't have one. So I had started imagining the story of Mumbai's first transgender police officer and that's what I have Inspector Rani Kumar (in the novella).
Related Images