Kolkata/IBNS: Responding to an open letter to Prime Minister Narendra Modi by Kolkata-based cultural and social activist Sundeep Bhutoria, Prahlad Singh Patel, Indian Minister of State for Culture and Tourism (IC), has assured that the government will take suitable measures to support the poor folk artistes and artisans who faced immense hardship in the wake of Covid-19 pandemic.

Kolkata-based cultural and social activist, Sundeep Bhutoria, had written a letter to Modi, seeking urgent intervention to address the plight of the thousands of poor craftsmen and artistes earning their livelihood by promotion Indian art, culture and heritage.

Patel, in a official letter to Mr Bhutoria, wrote, “I have instructed the Regional Cultural Centres across the country to prepare a list of such artistes and artisans, including those who have not been included in the list so far.” 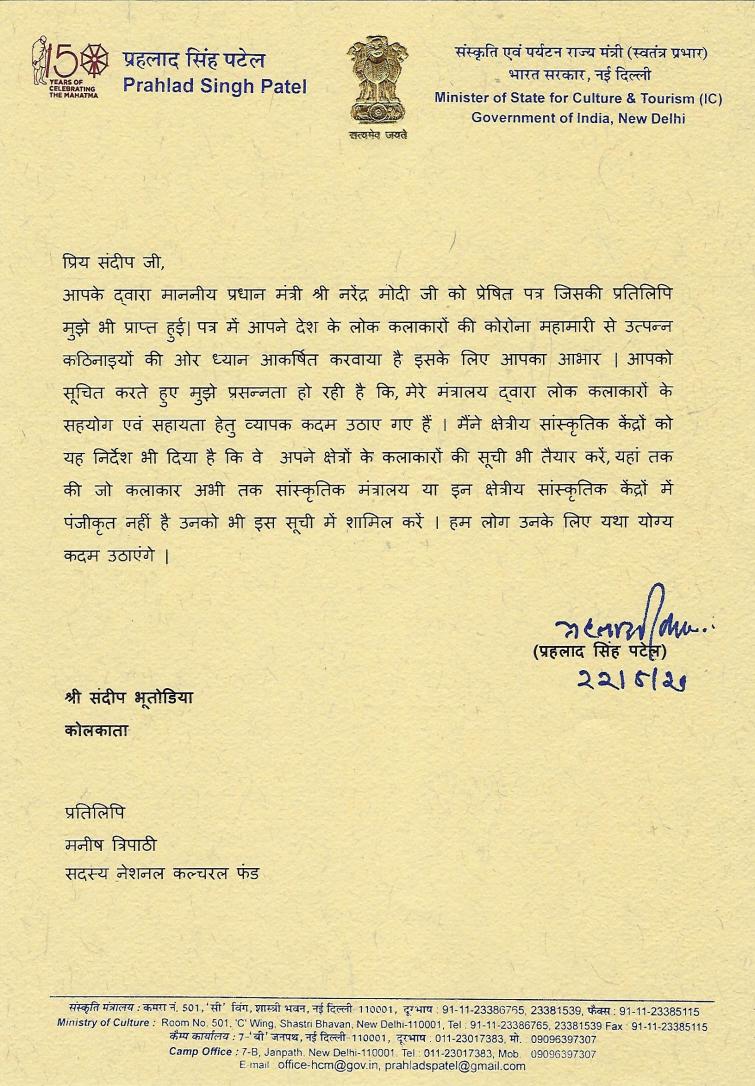 Bhutoria, who is associated with many national and international NGOs, said, “I wrote to the Honourable Prime Minister because I felt that the thousands of poor artisans, folk artistes and others, who are engaged in various artistic and cultural activities, did not have a proper forum or lobby to articulate the grievances and problems. I am glad that the government has taken note and initiated steps to alleviate their hardship.”

Thousands of artisans eke out a living by promoting Indian folk art, culture and heritage. Even during normal times these poor unsung torch-bearers of India’s rich culture legacy barely manage to make ends meet. In the face of this pandemic, thousands of such artisans, cultural workers, and craftsmen are enduring immense hardship.

Bhutoria is also the Trustee of Prabha Khaitan Foundation, an NGO which works with several such performing artistes and writers. The Foundation organizes events in 30 cities in India and overseas on a non-commercial basis to provide them with a platform and contribute to the sustenance and spread of Indian art, culture and heritage.

The crisis caused by the Coronavirus outbreak threatens to wipe out vast swathes of India’s cultural legacy and heritage built over thousands of years.