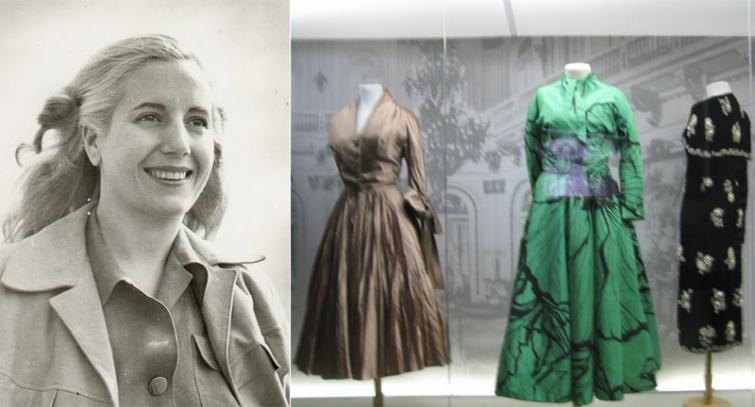 Eva Peron’s portrait in neon lights is back again on the night sky of Buenos Aires after a Leftist coalition won recently pushing out the ruling conservative party.  Ranjita Biswas remembers her visit to the Evita Museum dedicated to her in the Argentinian capital

In Buenos Aires,  the giant screen with neon lights tracing the contours of Eva Peron lit up the night sky again after a four year gap.

Argentinians are once again paying tribute to their icon, beloved ‘Evita’ for succour after the devastating economic downturn that the previous elected body unleashed.

True, she was the wife of President Juan Peron and led a privileged life but that did not take away her empathy for the common people and her involvement in numerous activities to help the poor and needy.

Now that the Left-wing Peronist coalition is back in power thrashing the conservatives, Eva’s portrait in lights, a landmark on a Buenos Aires thoroughfare is back. It was darkened earlier by the Rightist government, ostensibly to save power.  But loyalists saw it as an attempt to block the legacy-and influence of the lady.  People affectionately called her Evita or the little Eva.

In Andrew Webber's famous musical Evita Madonna  in the title role sang Don’t cry for me, Argentina  and introduced the younger generation worldwide about Eva Peron’s place in the mindset of South American country long after she is gone.  Eva died of cervical cancer at the young age of 33 in 1952.

Reading the report brought me memories of  visiting  ‘Museo Evita’, a museum built around her life, when I was in Buenos Aires. Actually, Eva Peron never lived in the building where this museum is situated on the Lafinur Avenue in the upmarket Palermo area of Buenos Aires. It was inaugurated in 2002, fifty years after her death, with the tagline ‘ Mi vida, mi mission, mi destino” (My life, my mission, my destiny).

Museo Evita dwells the fascinating life of Eva Peron. Indeed, her life held a lot of drama as an actress, social  activist and wife of president Juan Peron.  During  the turbulent 30s to 50s,  Eva Peron was a figure around whom legends were woven, her reputation even resonating in far-off Europe,  and beyond.

Born Eva Duarte in  May, 1919, in Los Toldos, a province near Buenos Aires,  she was brought up  in an influential household but political downfall of her father saw the family slipping into penury. After his death, her mother somehow held  the large family together. Good at theatricals, Eva left home to seek a career in Buenos Aires  though opposed by her mother. But, as Eva Peron wrote in her autobiography La Razón de Mi Vida (The reason for my life), “Like the birds, I've always preferred the freedom of the forest. I’ve wanted to be on my own and I have been on my own.”

Eva worked diligently to rise up from a radio artist, to the stage and then as a film artist. During a charity programme to raise funds for earthquake victims, she met her future husband and president- to- be, Colonel Juan Peron.

Right from the beginning , Eva Peron brushed aside notions of the expected role of a wife standing one step behind the husband  which was not liked by the conservative factions even within Peron’s army.

People loved her because she was a people’s leader. Her Eva Perón Foundation established hundreds of new schools, clinics, old-age homes and vacation facilities, and introduced complimentary physicians' visits and scholarships, among other benefits.

The beautiful mansion that now houses the Museo Evita was actually known as Hogar de Tránsito (Temporary Home) in Eva Peron’s time. Now it is a National Historical Monument.

In 1948, the Foundation bought it and turned it into a house for women and children with no resources. Inaugurating it Evita had declared “The Temporary Home shelters those in need and those who have no home... for as long as necessary until work and a home can be found... ”

She saw in her own struggling days the way  the so-called upper-class Portenos (as people of Buenos Aires  are called) looked down on the immigrants from the countryside who came in search of livelihood  in the big city and it stayed on with her. She wrote, “Charity separates the rich from the poor; aid raises the needy and sets him on the same level with the rich.”

The museum displays the kitchen where food was cooked, how women were trained to learn a skill to earn a living, her speeches as well as some of her personal effects like the beautiful gowns she wore on different official occasions.

Strong-willed as she was who declared “I am my own woman,” Eva Peron believed in the equality of women. She fought for women's suffrage and influenced  the government to  introduce the law  in 1947 giving voting rights to women of Argentina.

Standing onthe threshold of a new decade in this century with women at the forefront in many fields and  equality beingthe mantra, her words seem to remind how much ahead of time she was.


(Images by the author. The two Black and White Images courtesy Creative Commons/Wikipedia)