Toronto/IBNS: Montalvo Arts Center and Art Forum SF in collaboration with UC Berkeley Institute of South Asian Studies presented the first ever and one of the largest South Asian Literature & Art Festival (SALA) in the US.

The Opening Gala on October 4 was an exclusive event and attracted about 150 crème de la crème from the Bay Area, who schmoozed with the International Emmy Award nominees Vikramaditya Motwane and Varun Grover, alongside Rekha Rodwittiya, a contemporary and eminent artist, Priyanka Mathew from Sunderlande New York, Raghu Karnad, the Yale Wyndham Campbell award recipient, to name a few.

The opening gala included Dipti Mathur, a renowned art collector and a philanthropist from South Bay in conversation with Prof Sugata Ray from UC Berkeley.

The Tides of their Poems with Athena Kashyap and Tanuja Wakefiled made a wonderful addition to the Diaspora artists.

Another interestingly engaging panel on There are No Margins – with Minal Hajratwala and Siddharth Dube, made its mark for the quality literary arts curation.

As a grand finale for the literary panels, Professor Harsha Ram from UC Berkeley got into an elaborate encounter with a legendary actor, painter and a poet, Deepti Naval.

At this intimate evening, Naval revealed her life journey as an artist by exhibiting digital images of her paintings and read select poems from her books.

Tipu Purkayastha at the fireside chat format, with Varun Grover, Vikramaditya Motwane and Vikram Chandra (via skype) explored the process of adapting Vikram’s 2006 book ‘Sacred Games’ to the TV screen as a Netflix Original, the first Indian web-series to be nominated for the International Emmy Awards 2019. 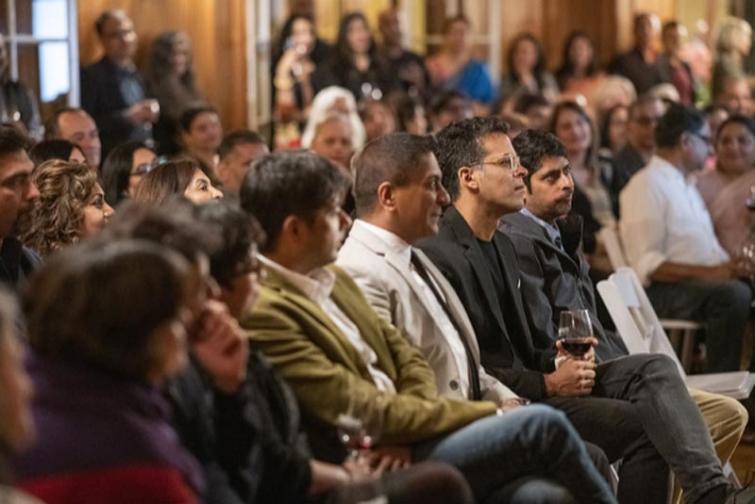 On October 13, SALA Festival had a film segment as the closing event showcasing a short documentary GuruCool by an Indo-Canadian filmmaker Sangita Iyer looking at the Indian Educators in the 21st Century education System.

Followed by Kaifinama, an award-winning feature documentary on the life of legendary and progressive Urdu poet, Kaifi Azmi, directed by Sumantra Ghosal, with famous Indian Actress Ashvini Bhave as the guest of honor.

“We are thrilled with the response we got in hosting the first ever South Asian Literature and Art Festival in the Bay Area! Its success has warmed our hearts - we heard rave reviews from not only the audience but also from the artists, themselves,” said Ambika Sahay, Executive Director, Art Forum SF.

“My observation of SALA 2019 is that Art Forum SF have woken up the sleeping giant,” said Tushar Unadkat, Media and PR Director, Art Forum SF.

Art Forum SF also expressed its thanks to the generous sponsors and volunteers, without whom this event could not have happened.