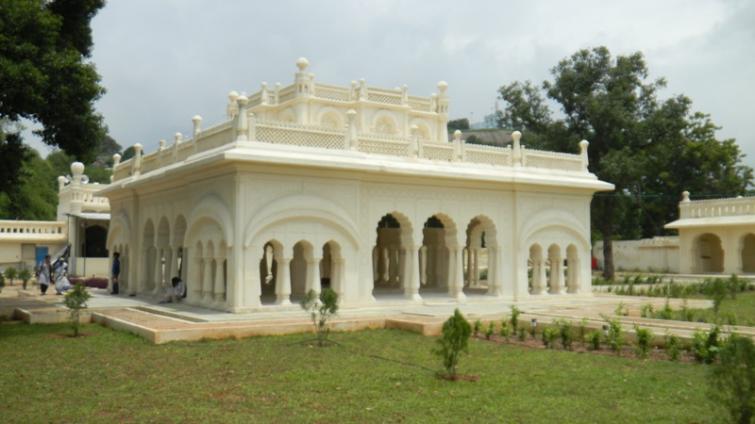 A woman poet of yesteryear

In the pantheon of Urdu poets the names of women hardly come up. Mah Laqa Bai Chanda was an extraordinary poet and courtesan who lived inHyderabad in the 18th century.  The U.S. Ambassadors Fund for Cultural Preservation has helped to restore her garden tomb which could bring into focus her contribution to art and culture, and charity. SPAN writer Paromita Pain reports

A professor of South Asian and Islamic Studies at Emory College of Arts and Sciences in Georgia, Scott Alan Kugle was always deeply interested in the intricacies of Urdu poetry. “It largely celebrates its male poets and writers,” he says. “But one of the first novels in Urdu, Umrao Jan Ada, centered on a powerful female protagonist.” Intrigued, Kugle started exploring female voices and characters in Urdu poetry and discovered the fascinating Chanda Bibi or Mah Laqa Bai Chanda, a famous courtesan who was elevated to the rank of senior ‘omarah’, the highest nobility, by the then Nizam of Hyderabad, Mir Nizam Ali Khan.

“Mah Laqa Bai Chanda is a very compelling character,” says Kugle, who is also an author. “Born in 1768, she was among the first women writers in Urdu, with a full divan of ghazals. She was a courtesan and, as sources reveal, was among the richest women in the state and an influential figure at court.”

In a paper titled, “Mah Laqa Bai and Gender: The Language, Poetry, and Performance of a Courtesan in Hyderabad,” Kugle explores how she was no “typical” woman of her time.

For the longest time, few outside Hyderabad knew about this 18th-century courtesan, poetess and a mystic explorer of love. The idea to renovate her tomb, which was in a dilapidated condition, was proposed by Kugle. In 2009, the U.S. Ambassadors Fund for Cultural Preservation (AFCP), which supports the preservation of cultural sites and objects and forms of traditional cultural expression in more than a hundred developing countries around the world, awarded a grant of  approximately Rs 78 lakh for the restoration of her monumental garden tomb in Hyderabad. The U.S. Consulate General Hyderabad, Center for Deccan Studies and the Muslim Educational, Social and Cultural Organization played key roles in this year-long renovation project, which involved the restoration of five buildings, the reservoir and the garden. The debris was cleared; water channels were rebuilt; trees and bushes were planted; and the exquisite building decorations were restored. The project also included designing and installation of exhibits on both Shi’ite culture and the roles of women in the region.

More than a courtesan

Mah Laqa Bai Chanda was the courtly address given to her by the Nizam of Hyderabad. “It means ‘Madam Moon Cheek,’  ” says Kugle. “Her real name was Chanda Bibi.” She was raised by her elder sister, who was married to the prime minster of the Nizam. She was highly educated and had a huge library in her house. She knew Arabic, Persian and Urdu. Sources say she would even discuss Persian poetry with Mir Alum, the second prime minister of the Nizam, which was quite unusual for a woman at that time.

“Today, people do not like to call her a courtesan because, in the modern world, a courtesan is associated with prostitution,” explains Kugle. “But this was not the case in the days when Chanda Bibi was writing.” Courtesans practiced and preserved the arts of the time and were skilled in witty conversation and repartee. Men, especially those in important positions, went to courtesans not just to be entertained but to also learn the art of conversing and negotiation. They were essentially the finishing schools of the time.

An admired figure in Hyderabad, Mah Laqa Bai Chanda is especially associated with education. In Nampally, Hyderabad, stands a government college for girls on a property that was gifted to her by the Nizam. “She did not give the government this property, for in 1824 when she died, she could not inherit property which passed on to the Nizam,” says Kugle. “Later, after India’s independence, when the government acquired the Nizam’s properties, a college was constructed.” Osmania University and the English and Foreign Languages University in Hyderabad were also built on the land that she once owned.

Mah Laqa Bai Chanda was a generous patron of art and history. She invited a down-and-out poet called Gauhar, who was from Bidar, a small town in Karnataka, to compile a history of Hyderabad. This comprehensive tome can be found in the Salar Jung Museum.

While Mah Laqa Bai Chanda is remembered for her poetry, the state still benefits from her philanthropy. She built many stepwells and rest houses for travellers.

“She gave generously to the poor,” says Kugle. He hopes that the restoration of her garden tomb complex will encourage more exploration of her works and persona. “It is always incredible to find that women like her existed in the past,” he says.