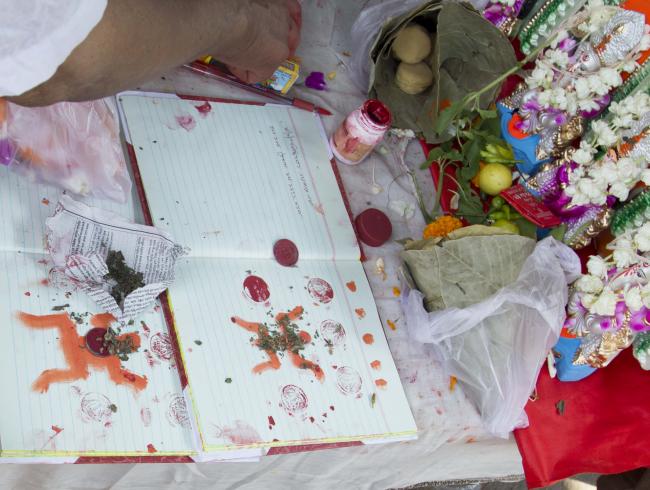 Kolkata, Apr 15 (IBNS): As the dawn of Apr 14 sets in, Bengalis across the globe cheered aloud and welcomed the first day of the Bengali New Year- 'Poila Boisakh' on Monday.

The occasion of Poila Boisakh is celebrated in both in the Indian state of West Bengal and Bangladesh besides the Bengalis residing all over the globe.

The pages of history states that the occasion of Poila Boisakh and the celebrations associated with it commenced from the reigns of Mughal emperor King Akhbar.

It is said that during the reign of Mughal emperors, agricultural taxes were collected from the farmers by following the Hijri calendar. However, this Hijri calendar is a purely lunar calendar and it does not coincide with the harvest.

This made it difficult for the farmers as they were forced to pay taxes out of season.

In order to resolve this difficulty, Mughal Emperor Akbar ordered a reform of the calendar.

The new Fasli San (agricultural year) was introduced in the year 1584 and came to be known as  Bengali year.

According to the tradition it became mandatory to clear up all dues on the last day of Choitro.

On the next day, or the first day of the new year, landlords would entertain their tenants with sweets. On this occasion there used to be fairs and other festivities.

Even at this age, the festival of 'Halkhata' is celebrated on the morning of Poila Boisakh as the businessman prays the Hindu Lord Ganesha and Lord Laxmi and also opening a new book of account.

In Kolkata, a special occasion of 'Choitro sale' is marked till the last day of the Bengali month if 'Choitra', where people can buy various goods ranging from clothes to mobile phones these days in a cheaper rate.

And on the first day of Boisakh, the traders give sweet packets to the buyers when they visit the shop.

As the mood of festivity sets in, girls and women, clad in traditional attires (dhoti and saree) visits various places in Kolkata.

From new age shopping malls to Kolkata's Nadan cultural complex, they visit all these places and get involved in the 'Nipat adda' (chatting).

Indian PM Narendra Modi wished the Bengali community and tweeted: "Shubho Nabo Barsho! I pray that the year ahead is filled with joy. May everyone be blessed with good health."

Union Minister Babul Supriyo wished: " Wishing you all a very Happy Bengali New Year. May the new year brings safety, health and happiness to the people of Asansol. #ShubhoNoboBorsho."