She leads a yellow revolution

Fifty-two-year-old Trinity Saioo in Meghalaya has never heard of turmeric lattes that have gained a cult following in the ever-expanding list of healthy beverages. But every day, after the school she teaches in gets over, Saioo the teacher diligently tends to her farms of the ‘golden spice’ that is the core ingredient behind the latte trend.

Far from the madding crowd that has jumped on to the turmeric-wellness bandwagon, Saioo, an award-winning turmeric farmer from Mulieh village in the northeastern state, has been silently leading 800 women in her state to cultivate and boost the popularity of the indigenous, high-curcumin content Lakadong variety of the spice.

Saioo has been hand-holding women to blaze their own trails to success, reaching out to women farmers from her own village first. Mulieh and several other adjoining villages, that form the epicentre of the Lakadong variety of turmeric, lie in the eponymously named area in the rugged terrains of Meghalaya’s West Jaintia Hills, the notorious coal-belt of the state.

The Jaintia hills (split into east and west) produce at least three turmeric varieties – Lachein, Lakadong and Ladaw, each with its distinct identity. 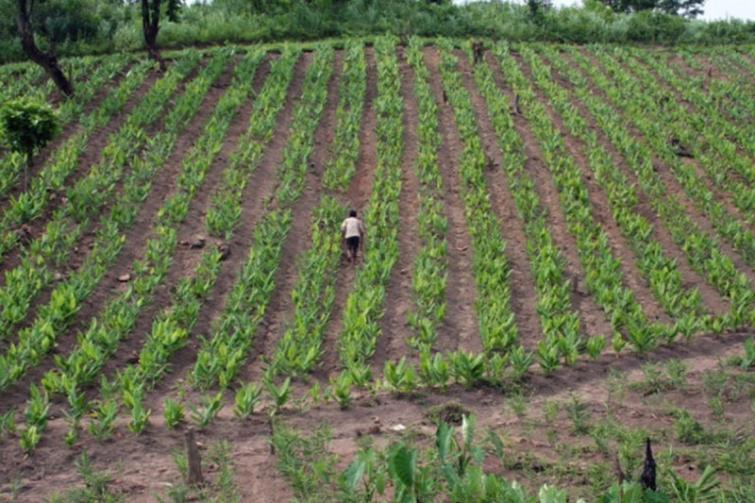 “My mother also farmed turmeric. So it was a very natural transition for me to start doing the same,” recalled a proud Saioo, who was recently awarded by the Union Ministry of Agriculture for excellence in horticulture production.

Buoyed by her success, Meghalaya’s Department of Agriculture is relying on Saioo’s leadership to take Mission Lakadong forward to mobilise growers to expand the area of Lakadong turmeric farming in West Jaintia Hills.

Meghalaya’s Mission Lakadong 2018-2023 aims to produce 50 MT (metric ton) of the turmeric per annum in the next five years. As per departmental figures for 2015-2016, the total area of turmeric cultivation in the state is 2,516 hectares, yielding roughly 16 MT of turmeric annually. Most of the turmeric grown in East and West Jaintia Hill districts is the Lakadong variety with a combined production of nearly 9 MT.

According to the Indian Council for Agricultural Research, Lakadong has seven percent curcumin, two percent higher than varieties available in the Indian markets.

“But I realised that most of the women were growing the Lachein variety of turmeric, which had low yield and low curcumin content. It had no market demand. The Lakadong variety used to be grown earlier, but lately, there has been a decline in the production of turmeric,” Saioo said.

It is believed that the coal mining boom around 20 to 30 years ago and the high margins offered by mining and exports, lured farmers away from turmeric farming. However, after the 2014 ban on coal mining imposed by India’s National Green Tribunal (because of the use of the dangerous rat-hole method), many of those who had crossed over to mining switched back to turmeric farming.

Saioo’s tryst with Lakadong began in 2003. After she experimented with Lakadong in her fields, she observed that it doubled her income in contrast to when she grew the Lachein variety. “I realised that other farmers were not aware of the benefits of growing Lakadong. The high cost of the seed tubers was also a hindrance for the poor farmers,” Saioo said. 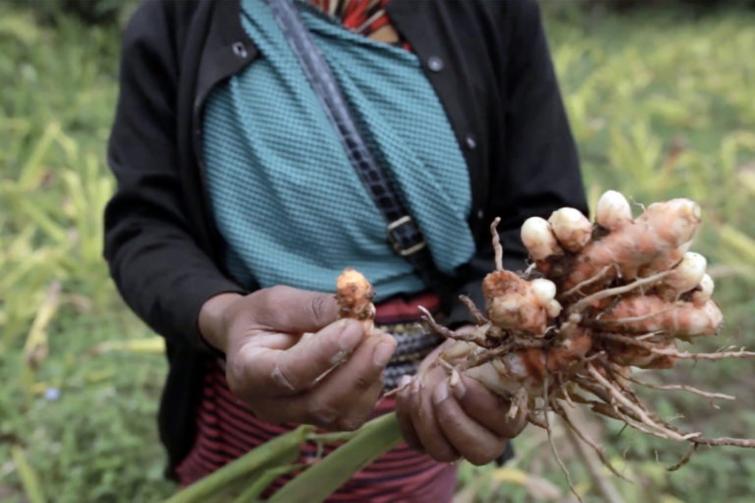 Lakadong turmeric is proven to have two percent more curcumin content as compared to other Indian turmeric varieties. It gives a better yield and fetches higher profits. Photo from Department of Agriculture, Meghalaya.

Saioo, received training from the state’s agriculture and horticulture departments on improving the yield of Lakadong turmeric and with the Spices Board by her side, she helped illiterate women to complete their documentation and avail subsidies for seed tubers as well as organic certification to switch to the high yielding variety.

“As a teacher, I guide them to cultivate turmeric and help with pest management. Women in Meghalaya do the core of the farming work and our husbands or male members assist them. So any boost to their skills means it adds to their family’s income,” she said.

Over the course of the last decade, Saioo has been instrumental in reviving the Life Spice Federation of Self-Help Groups, which currently has 100 self-help groups (SHGs) as members. She has pushed for policy advocacy, implementation of schemes and marketing of Lakadong turmeric.

Through the SHGs, she leads 700 to 800 women farmers, who rely on the versatility of turmeric-derived products for their income. “The turmeric is harvested, sun-dried and sliced or powdered by the women,” Saioo explained.

The advantage with turmeric is that once it is harvested, the rhizome can also be dried, stored and sold as and when needed. “Many women sell dried and powdered products when they need money, for instance, to purchase textbooks ahead of the new school session. So the income is variable and the farmers have a choice,” Saioo said. 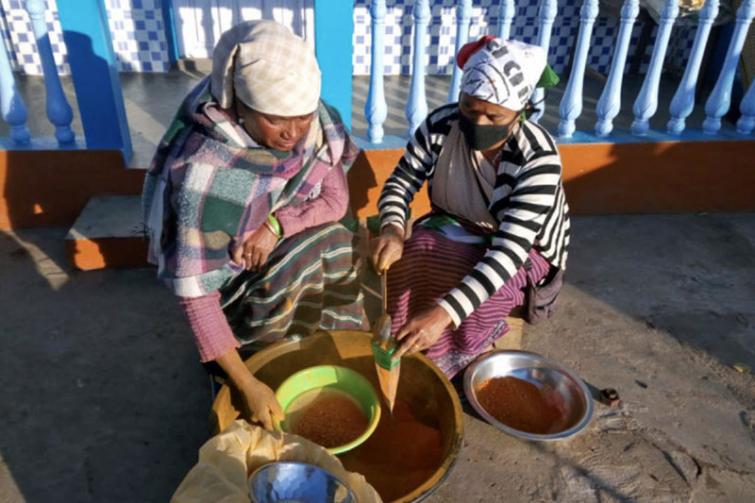 Trinity Saioo (right), a teacher and farmer, has played an important role in spreading awareness about Lakadong turmeric and helping other women to cultivate it. She was rewarded by the Union Ministry of Agriculture for excellence in horticulture production. Photo from Trinity Saioo.

But upscaling production has been a challenge due to the lack of an organised supply chain, concedes Saioo.

“We send out some of the products to Kerala, Karnataka and other northeast states but it is still not an organised process. There is a good demand in the market and we have our own government-established aggregation and processing hub but unless we streamline the supply we can’t run it profitably,” said Saioo, referring to the demand among private players.

The Mission Lakadong document also reiterates what Saioo has stressed: the turmeric aggregation and processing hub established at Thadlaskein block has yet to develop an organised supply chain that would enable it to run profitably year round. “We have drying machines and grinding equipment in the hub but we need a decent supply chain to run them year long,” Saioo said.

According to the Mission Lakadong document, private players have started making inroads into the turmeric-growing villages of Jaintia Hills to source the spice and cash in on the default organic nature of the turmeric and its high curcumin content.

A turmeric oil extraction plant has also been also set up for value addition, but the unit is barely managing to keep itself afloat as it deals with problems of inefficient management, no distinctive branding strategy and low understanding of the market. 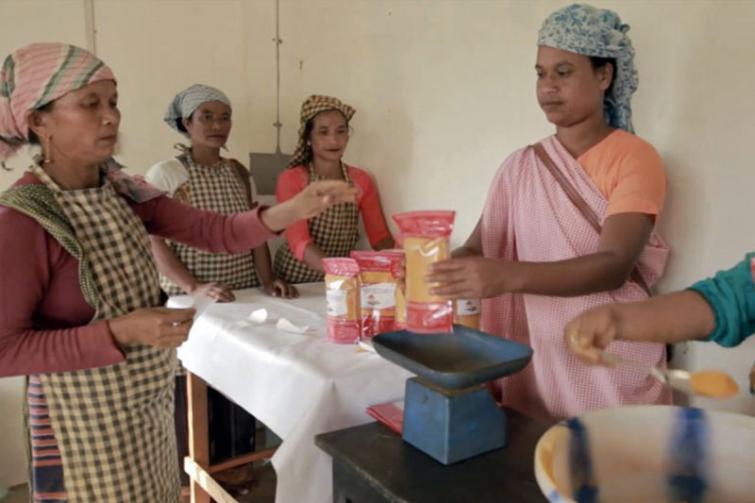 While awareness about Lakadong turmeric is spreading in Meghalaya and the governmentâ€™s â€˜Mission Lakadongâ€™ gains traction, lack of an organised supply chain is still an issue. Photo from Department of Agriculture, Meghalaya.

“Instead of relying on chemical pesticides, we have switched to cow urine, vermicomposting and other organic means of aiding growth. But while some years there is no infestation, there are others when these pests completely ravage our plants,” said Saioo.

But she and her band of farmers are not ones to back down. “We have the gift of good soil, conducive climate and hardworking women. We hope to work these to our advantage so that people outside Meghalaya realise the value of our produce,” she beamed in conclusion.