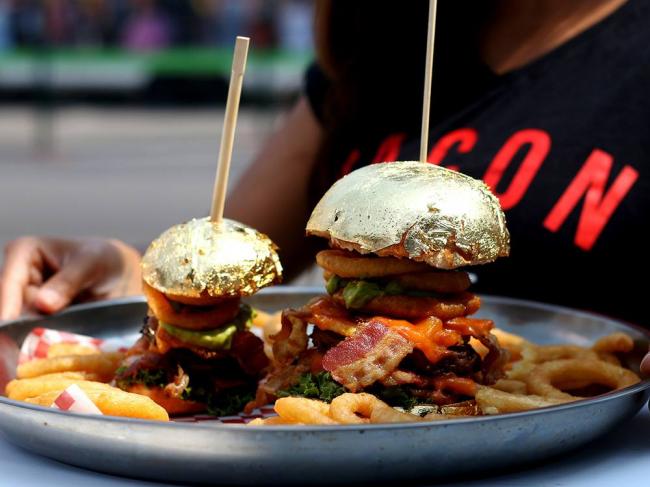 Toronto, Sept 18 (IBNS): While there can be many reasons to visit the Ex year after year, gastronomers always tread to taste the list of bizarre foods that the CNE 2018 exhibition hosts each year.

From the $100 golden burger and gold ice creams to the ace Canadian style S’more fried chicken sandwich, to a chocolate banana steakclair instead of a Philly cheesesteak,  or a burger made with ramen bun or just fried cheese curds, CNE 2018 had a galore of such bizarre tasting foods on display.

Hundreds and thousands of people who visited the fairgrounds, definitely made a stop to check how the gold burger was! Created by the famous Bacon Nation, the weird $100 burger had a real 24 karat- gold foil leaf covering atop the brioche burger bun.

“We travelled all the way from Oshawa to taste the gold burger. However it was too pricey, so we had to settle with the slider option available for $25,” said 34-year-old,  Barbara James.

“It was one of the most expensive items for sale in the entire food hall. And we saw that almost everyone did pass by to see how gold looks on food. However, when we bought it tasted just normal like a bacon-rich burger”, said 22-year-old Frank a University of Toronto student who visited the fairgrounds with his gang of friends.

On the other side, the Canadian S’mores made a new entry into the gourmet food mart. S’mores, known initially as a Camping sweet treat, with fire roasted marshmallows tucked on a layer of chocolate and sandwiched between two pieces of Graham cracker. However, at the CNE, the ace Heartbreak Chef came up with the Southern-style fried chicken breast on a chocolate-topped brioche bun, filling up with the roasted marshmallows, crushed graham cookies and chocolate chunks inside. For the not so chocolate lovers, the food joint offered Apple Fritter Fried Chicken Sandwich.

“I was delighted with the awesome idea and the taste of the sandwiches. Tried both of them, as me and my girlfriend bought them for our lunch,” said Mark Cheng, a Software Engineer by profession. “I am sure we need to go for more workout sessions in the coming weeks, considering the calorie intake we had today.”

Last but not the least, Liberty Noodles big ramen made bun burger was a great hit among the settled diaspora of South Asians in Canada. 27-year-old Yi Chung says, “I tried the burger and was surprised with the topping of banana ketchup aioli on it, apart from the thought that ramen can make a bun”!

For sugar lovers, there were many sweet treats on the mart. From gold ice creams to curry coconut ice cream, dutch luv puffs, to tangy Mexican corns, and deep fried veggie cauliflowers in buffalo style, CNE 2018 rocked with its galore of food on display.