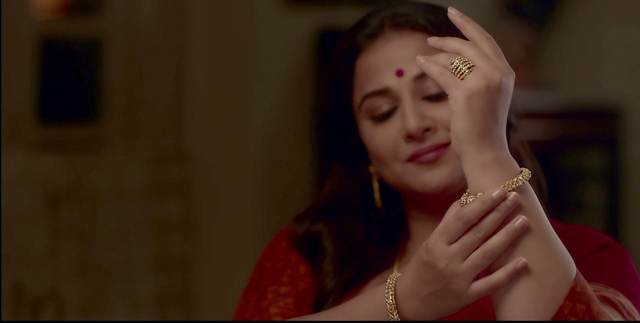 Kolkata, Sept 10 (IBNS) In its new campaign, Senco Gold & Diamonds, the jewellery brand from Calcutta, puts a different lens on craftsmanship. Karigari finds its significance and relevance through the stories of four different women from four different parts of the country. They are women who find a reflection of their identity in the jewellery they choose to wear. Real, everyday women.

With real stories it is set to play up the fact that women, the karigars of life, are as unique as the pieces of adornment they choose for themselves.

Vidya Balan has essayed these diverse characters. Suresh Triveni - the director of Tumhari Sulu-  teams up with Vidya and the crew that created Sulu, to tell these stories and brings it alive in his characteristic style.

Each of the four films narrates the way a woman finds herself, her life and her identity intertwined with the piece of jewellery that she wears.

The second story is told in the modest voice of a housewife in Delhi.

She acknowledges the importance of little indulgences and discovers her dazzle in the karigari of diamonds.

The third story finds its protagonist in a South Indian woman. Someone who discovers that karigari can combine traditional values and modern outlook just the way she has never lost touch of her roots.

And the last film helps a cosmopolitan modern working woman, who believes in simplicity, find her match in the minimalistic and intricate karigari of lightweight jewellery. Suvankar Sen, Executive Director, Senco Gold & Diamonds, said: “At Senco Gold, karigars are one of the pillars of strength. Each time a client praises our intricate designs, it is a credit to these craftsmen."

"We are fortunate to have them associated with us for years. In fact, some of the karigars have been with us for generations so they know everything when it comes to jewellery, modern or old; traditional or futuristic. This campaign is a tribute to the karigars who work untiringly to craft jewellery by their hands as well as to the Indian women who are karigars of life."

Sujoy Roy, Managing Partner (Creative), Ogilvy, said only an actor as versatile as Vidya Balan could do justice to these roles. "Unlike other jewellery campaigns, this campaign doesn’t overpromise or create an eclectic space for jewellery. It is set in the real space. And it finds its voice through the stories of four relatable characters across the country," he said.