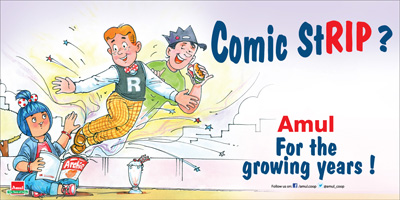 In its latest poster, Amul showed Archies and his friend  Jughead. The poster reads: "Comic stRIP" with 'Rest in Peace'. Showcasing the popularity of the character Archie, which was  created in 1941 by Vic Bloom and Bob Montana, the strip also reads: "For the growing up years!". Since the news of  comic character Archie Andrew’s death was revealed, people, including celebrities, expressed their thoughts and shock over the issue. The freckle-faced teenager, who along with his fans, have entertained readers for decades, will die  in the Life with Archie issue which will hit the stands onJuly 16. According to reports, the character will sacrifice his life to save a friend. "Few details are known, but it seems fitting that Archie would go out a hero. The 37th issue one week later will end the series," CNN reported.  Speaking on Archie's death, Archie Comics CEO Jon Goldwater told CNN: "I think it's the natural conclusion to the 'Life With Archie' series. Archie dies as he lived -- heroically. He dies saving the life of a friend, and does it in his usual selfless way. Archie has always been a representation of us -- the best of us. Our strengths and our faults." Meanwhile,  Archie's fans, including celebrities, have expressed their shock over the announcement. "#ARCHIE IS BEING KILLED OFF? ... WHERE WE BUY GRITING KARDS FROM NOW?"  Indian voice over artist Ashwin Mushran tweeted. American actor  Drew Carey posted on his Twitter homepage: "Wtf?! You can't kill Archie! Arrgghhh." Indian comedian Vir Das said: "Archie Andrews was a bit of a compulsive womaniser for over 40 years. This might be Karma."  Filmmaker Pritish Nandy tweeted: "The death of Archie is like an obit for my growing up years."