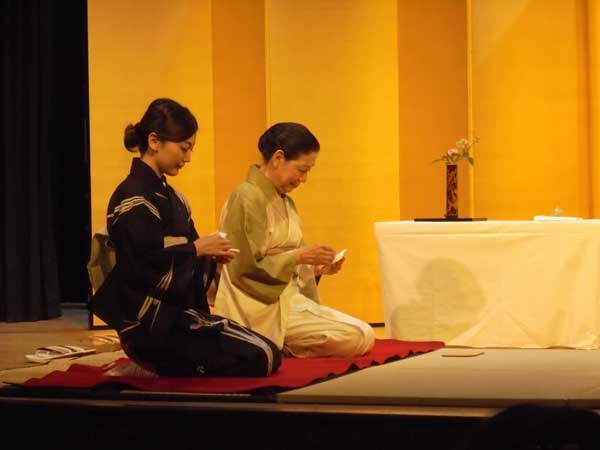 Kolkata, Feb 27 (IBNS)  Drinking tea is so common to us in India that only a personal choice, Darjeeling orthodox or Assam’s CTC, can become a debatable point. But in Japan, the process of tea making and drinking evolved into an elaborate ceremony that can stretch from 40 to 45 minutes.

Though the breakneck speed of modern life may not allow the ceremonious procedure today, it is interesting to know about ritual and the philosophy behind the traditional Japanese tea ceremony.

Connoisseurs of Kolkata had a rare opportunity recently to experience “Chado” – the Way of Tea, in an event organized by the Consulate General of Japan, Kolkata, in collaboration with Paschimbanga Bangla Akademi at the Rabindra-Okakura Bhavan.

Inaugurating the function, Masayuki Taga, Consul General of Japan, drew on the close ties between India and Japan and  reminded how Rabindranath Tagore visited Japan five times beginning in 1916.  He  wrote about his experience in Japan Jatri. Tagore also wrote about the tea ceremony he had witnessed.

The demonstration of the ceremony at the Kolkata event was presided over by Sosei Ajioka, tea master and instructor of the ‘Urasenka’ school. In the traditional ceremony guests are invited with utmost courtesy who then sit on tatamis spread on the floor in an alcove and politely  partake of  sweets made at home while the host  meticulously  inspects every utensil to see that they are ‘purified’ to his satisfaction. 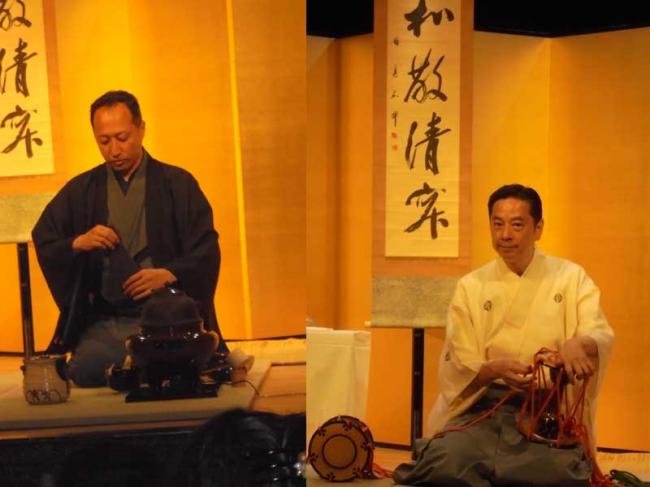 Even the bowls and tea accessories  are chosen to keep to the harmony of the occasion. On the wall of the alcove usually hangs a scroll with  calligraphy writings that mean peace, tranquility and harmony. “The whole idea is to enjoy tea in good company in a relaxed way and enjoy the tranquility of the atmosphere,” explained Ajioka.

The tea ceremony was followed by demonstration of beating the Kotsuzumi, traditional hand-held small drum. It is usually played in Noh theatre performances to pray for peace and a good harvest.

Genjiro Okura, grand master of ‘Okura’ school of Kotsuzumi-kata, explained how the drum’s history goes back to centuries before Christian era. The axis  that holds the two sides made of horse skin is fashioned from cherry tree wood and can last for hundreds of years. “This one is 450 years old,” Okura said pointing to his drum.

“Percussion is the oldest musical instrument the world over. We have lots of influence from India as Buddhism travelled from here and even in this drum we can detect some,” he said.