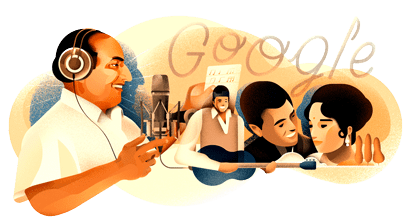 Google created a beautiful doodle on its home page as a homage to Rafi.

The doodle depicts the legendary singer recording a number in a studio, while actors bring the song alive on the silver screen.

Mohammed Rafi was notable for his voice and versatility in playback singing as his songs ranged from classical numbers to patriotic ones, sad lamentations to highly romantic numbers, qawwalis to ghazals and bhajans.

He was known for his ability to mould his voice to the persona of the actor.

He received six Filmfare Awards and one National Film Award.

In 1967, he was honoured with the Padma Shri award by the Government of India.

Rafi is primarily noted for his songs in Hindi, over which he had a strong command. He sang around 7,405 songs in many languages.