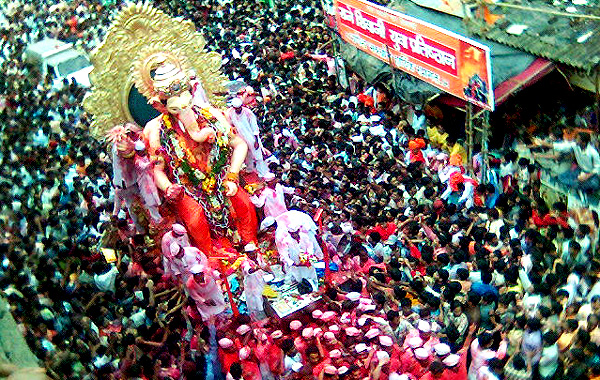 India Blooms News Service | | 29 Aug 2014, 09:52 am
# Ganesh Chaturthi Friday India, # Ganesh Chaturthi
Mumbai, Aug 29 (IBNS) The city of Mumbai along with the rest of India welcomed the elephant-headed Lord Ganesh amid much hype and fervour as the ten-day long Ganesh Chaturthi festival started from Friday.

The ten-day Vinayak or Ganesh Chaturthi festival is celebrated as the birthday of Lord Ganesha, Hindu God of wisdom, prosperity and good fortune.

‎"On Ganesh Chaturthi we bow to Lord Ganesh. May Lord Ganesh shower his blessings on us & enrich our lives with peace, joy & wisdom," the Prime Minister said.

President Pranab Mukherjee has greeted fellow-citizens on the occasion of Ganesh Chaturthi.

In his message the President has said, “On the auspicious occasion of Ganesh Chaturthi, I convey greetings and good wishes to all my fellow citizens in India and abroad."

"May Lord Ganesha, the symbol of wisdom, prosperity and good fortune shower his blessings on this day and remove all obstacles in the path of our development so that we can move ahead as a strong and vibrant nation," he said.

Vice President M. Hamid Ansari also greeted the citizens on the occasion. In his message, he has said that Lord Ganesh is the very embodiment of wisdom, prosperity and good fortune.

"May his blessings help us build a peaceful, prosperous and enlightened society," Ansari said.

Although the festival celebrated across India, it is most popular in Maharashtra where over 10,000 idols are worshipped in Mumbai alone.

In Mumbai, one can see the largest idols in the country; height of some Ganesh idols even soars up to sixty feet.

It was a busy day for Mumbai on Thursday as the city echoed with chants of 'Ganpati Bappa Moraya' with idols arriving at residences and pandals.

Mumbai's famous Siddhi Vinayak temple has been adorned with flowers and decorative lights. The security of the temple complex has also been tightened up.

The most popular Ganesh idol is worshipped at Lalbaugcha Raja near Lower Parel where the theme is king's durbar (court).

One of the tallest idols in the city is worshipped at Chandanwadi at Kalbadevi.

Heavy security arrangements have been made in Mumbai for the festival.

Meanwhile, celebrities took it to Twitter to wish their fans on the occasion.

Actress Priyanka Chopra wished all by tweeting: "Happy Ganesh Chaturthi to everyone..may Ganpati bappa bless us with peace and happiness..heres to new beginnings.."

Actor Manoj Bajpayee ‏tweeted: "Happy ganesh chaturthi to you all!"