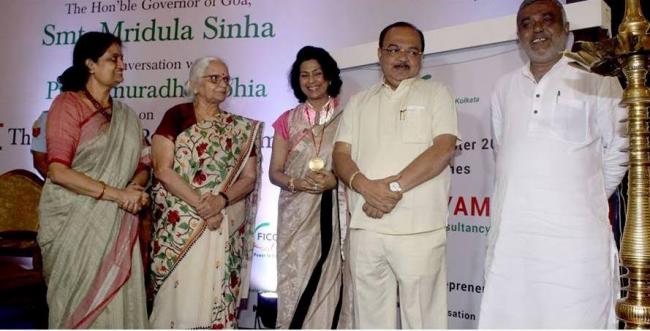 Women now have a more egalitarian world to fight for rights: Goa Governor

India Blooms News Service | | 31 Jul 2016, 11:56 pm
#Goa Governor , #Mridula Sinha
Kolkata, July 31 (IBNS): Goa governor Mridula Sinha has said that the women of today are fighting for their empowerment in a more egalitarian world and it should not be so that after two decades one has to fight for men's empowerment.

"We should all join hands to strive for egalitarian stability with man. But again, that war should demarcate a limit, it cannot be that after 25-30 years, we are to fight for ‘men empowerment'," she said  while attending an event organised by FICCI Ladies Organization(FLO) in Kolkata, recently.

Both male and female should be involved collectively and sympathetically for their need of equal rights," she saiid.

The FICCI Ladies Organization(FLO) a women’s wing of the national organization recently launched their new initiative 'Swayam', a business consultancy cell for women in Kolkata.

Present at the launching ceremony along with the Governor of Goa was Sovan Chatterjee, Mayor of Kolkata, Anuradha Lohia, Vice Chancellor of Presidency University,  Debesh Kumar, MMIC, Parks and Gardens, Kolkata Municipal Corporation.

Speaking on the occasion Mayor Sovan Chatterjee said: ”If a woman holds power she knows its method of right utilization to the fullest and thus today there are innumerable examples of successful women around us.”

”Kolkata is indeed proud to know of such a wonderful business initiative being launched in their heart and I am assuring to be always beside,” said the Mayor.

The launch was followed by an interactive session on the topic “Changing Roles of Women”. Anuradha Lohia hosted the session, hurling questions to Mridula Sinha related to her personal experiences in her journey from being an academician to a social worker and finally a politician.

"After my struggle of forty years, in voyaging different corners of India, I discovered today’s world has become much more favorable for women in terms of development in comparison to the past,” said Sinha.

On being asked about her suggestions to prevent some of recent cases of violence against women, she said: ”Our society is in mandatory need of proper training of sexual education. Food, clothing, shelter and sex are the basic needs of a human and when the fourth need is transformed into a repressed desire, it causes tragic cases like the Delhi gang rape.”

Aupama Sureka, Chairperson,FICCI FLO, Kolkata while commenting on the launch of 'Swayam' said: ”To  accelerate women’s participation in the process of economic development, the first step is to develop and promote entrepreneurship among women- and the concerted effort is required from the Industry government and the society."