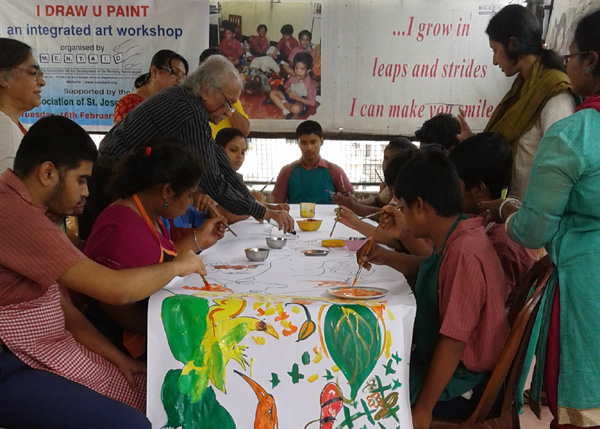 The event saw participation of students from MENTAID and other similar institutions like Naboprayas and Manovikas Kendra. At this integrated art workshop, Baniprosonno rolled out the paper and drew with a flourish and the children filled those drawings with colours to the accompaniment of foot-tapping music. It was a visual treat where a riot of colours filled the scene with creative vibrancy. The 84- year- old painter swept his marker pen on the sheet to draw figures of animals, leaves, flowers and birds. Their  work saw them receive the award for the Best Parents’ Organisation from the Government of West Bengal.  MENTAID, (the Association for the Development of the Mentally Handicapped),  a 29 year old non-profit, educational, training, vocational, and cultural institution for the development of the mentally handicapped children and adults, is the first of its type in West Bengal created by the parents’ of the mentally challenged children.  MENTAID has been nurturing and empowering young adults and also initiated the concept of Self Advocacy in West Bengal by organising a meet for Self Advocates in 1997, and today Self Advocacy has become a national movement.

‘I Draw U Paint’ by Baniprosonno, was an attempt at sensitising children from regular schools towards the children with special abilities. Baniprosonno is a flamboyant artist in his own style. He is one among the group of Indian artists, who pioneered modern Indian art and whose work grew out of revolutionary innovations. He has held over 100 one man shows across the globe. He has displayed his works in Kolkata, New Delhi, Mumbai, Kathmandu, Paris, London, Berlin, Amsterdam, Oslo, Stockholm, Reykjavik, and many other places on invitations from art galleries and museums, such as the Commonwealth Institute (London),  Kullurhuset (Stickholm), Sonja Henie Modern Art Centre (Norway), Nordjyllands Historiske Museum, Aalborg( Denmark), Kulturant (Keil), Reykjavik and many more.    Baniprosonno creates a fantastic animal world made out of paper cuttings and twigs for children. The art of which he has demonstrated through various workshops in schools in India and abroad.

Some of his famous creative workshops titled 'Phantastic Animals', 'Lamps and Insects', 'Wrap Rocks', 'Creative Paper Cuttings' and 'Drawing Marathon', amongst others, have received tremendous appreciation.  He is also a poet and short story writer. In his artistic endeavours he is ably supported by his artist wife Putul. The workshop was supported by the Alumni Association of St. Joseph’s Convent, Patna, Kolkata chapter.  (Reporting by Aninnya Sarakar)