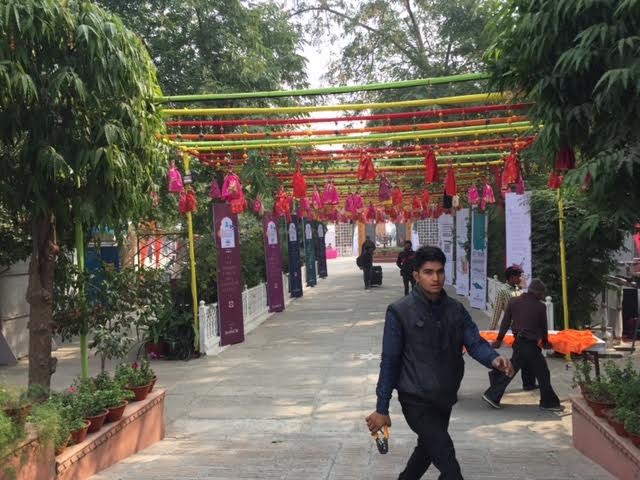 India Blooms News Service | | 21 Jan 2016, 08:59 am
# JLF treat, # JLF
Jaipur, Jan 21 (www.rajasthanpost.com/IBNS) Jaipur's January jamboree is here. Starting Jan 21, it will run through five days till Jan 25. So if you happen to be in the Pink City during the period, donâ€™t make the mistake of skipping the literary extravaganza â€“ the Jaipur Literature Festival (JLF), because other than the illustrious authors, the invigorating debates, the celebrity gawking, the romance of the Diggi Palace, the sprawling lawns of the heritage palace, the Diggipur ki masala chai, the divine morning music, the melodious musical nights will warm up you, despite the chill in the January air.

Immerse yourself in stories

Themes of the Lit Fest

The ninth Festival has a number of themes running through various sessions which address vital issues such as Navigating Modernity, Middle East, neighbourhood War and Conflict, Migration, privacy, in terms of Net Languages, Women Uninterrupted series. Indian writers take centre stage at the festival and a number of sessions will celebrate the rich diversity of languages in South Asia as well as the rich oral heritage of Rajasthan.

Get up, close and personal with your favourite authors

Want to lunch with literary heavyweights?
Celebrate the success of the Festival with your favourite authors at the Writer’s ball. While the Festival is completely free and open to all, booklovers can grab a golden opportunity to interact with literary heavyweights by buying the special delegate pass, visiting as a ‘Friend of the Festival’. In addition to sharing the lunch table with other delegates and authors at Diggi Palace, you can experience the evening music every night and round off the Festival dancing the night away at the Writer’s Ball. With the delegate pass you have access to exclusive extra sessions at royal forts like Amber Fort and Hawa Mahal. ‘Friends of the Festival’ can also take up special festival discounts on their accommodation at select hotels.

‘Sip’ your way through sessions

What better way to enjoy those overwhelming after-session moments and discussions than while sipping on famous Pushkari and Diggipuri chai and dhaarwali coffee and munching on kachori and samosa stalls on any of the sprawling venues. It will not only satiate your mid-day hot snack cravings but also add Rajasthani warmth to the yummy food.

Alongside your enriching experience at the royal retreat, the Diggi Palace, explore the nearby cluster of magnificent forts, museums and palaces while visiting the Pink City. There is also a regal shopping experience awaiting you with a wealth of antique jewellry, traditional jootis and fabrics. Famous for its flavours the city offers foodies much to relish in its Lal Maas, Dal Batti, Kachori and other Rajasthani cuisine.