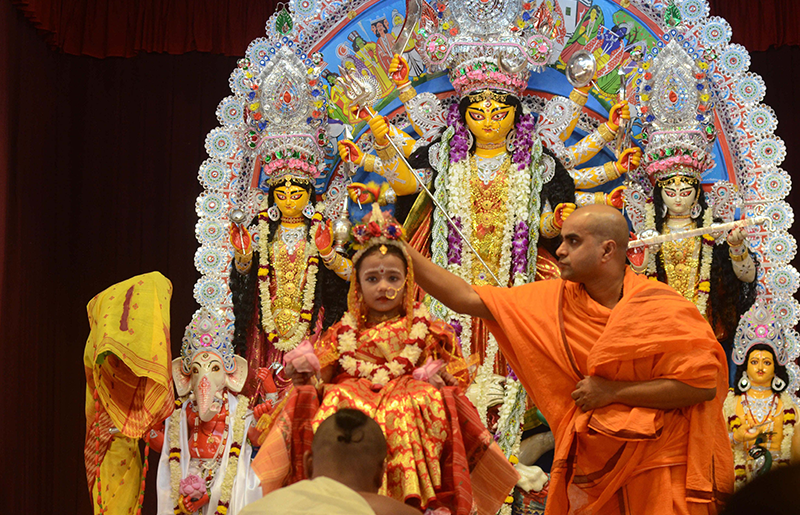 Kolkata/UNI: Thousands of devotees from across India and abroad congregated at Belur Math - the global headquarters of the Ramakrishna Math and Ramakrishna Mission - to watch Kumari Puja, or the worship of a pre-puberty girl Monday as the Durga Puja carnival peaked in West Bengal.

After night-long pandal hopping, people in the eastern state Ioke up to the chants of mantras on Maha Ashtami - the eighth day of the lunar calendar and the third day of the Durga puja festivities.

According to Hindu mythology, it was on this day that the goddess slayed Mahishasura – the buffalo demon king – to rid the earth of evil.

The rituals began in the morning with the customary Kumari puja - worship of girls as personifications of the goddess.

Kumari Puja was started by Swami Vivekananda in 1901 at the Belur Math, ten km from Kolkata in Howrah district.

An unmarried girl between one to sixteen years, who has not yet reached her puberty and is bereft of desire, worldly pleasures and anger is the right requisite for the Kumari Puja.

The girl fasts the whole day until the puja is over.

She sits on a throne or a decorated chair before the goddess, as the priest chants hymns amid the sound of dhak (traditional drum). After the puja the divinity of the goddess is said to descend into the Kumari.

Kumari puja was also organised in many community puja marquees and the households where the goddess is being worshipped.

Meanwhile, thousands of devotees rushed to the marquees since the morning to offer ‘anjali’ (floral offerings) to the goddess.

The Durga puja in the house of the Lahas - an aristocratic family in the northern part of the city - stepped into its 200th year in 2022.

A salient feature of the traditional puja is that the goddess is depicted here for her serenity and pacific nature, as she is shown not as the slayer of the demon king but as one sitting on the lap of lord Shiva.

In Kolkata, around 2,700 community pujas are being held. Besides, the goddess is being worshipped in another 5,000 households in the city. Tens of thousands of marquees have come up elsewhere in the state.

The community puja at Santoshpur Lakepalli is an ode to the growth and contribution of television in shaping the culture of the country.

Memorable television programmes from the black and white era to the heralding of the age of colour is being shown across the marquee, which is drawing huge footfalls.

According to the Ramayana, before attacking Lanka in search of his wife Sita, Lord Rama had performed Durga Puja in autumn.
However, mythology also states that the Puja celebrates the annual descent of Goddess Durga, the slayer of the demon Mahishashur, accompanied by her four children - Ganesh, Kartik, Lakshmi and Saraswati - on earth to visit her parents.

The goddess, astride a lion and wielding an array of weapons in her ten hands, stays for four days to eradicate all evil from the earth before returning to her husband Lord Shiva at Kailash on Dashami.