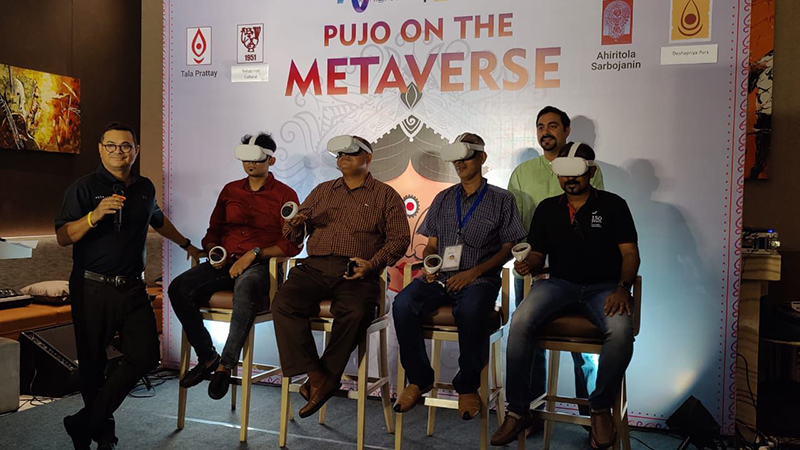 A foray into the future that brings the iconic Durga Puja celebrations of Kolkata to the Metaverse.

This Pujo season, the iconic and popular Ahiri TalaSarbojanin, Deshapriya Park, and Ballygunge Cultural and Tala Prattay pandals will be accessible through 3D twins on the Metaverse.

Elaborating on the experience, Sukrit Singh, Co-Founder, Metaform and XP&DLand, said, "After the huge recognition by UNESCO, this is another great hurrah for the Pujas. We have been inspired to bridge the gap between devotion and technology, and what better way to begin than by hinging on one of the world's largest devotional celebrations?

"This initiative gives Maa Durga an enhanced address on Web 3.0 where the devout from across the world will be able to enter a three-dimensional recreation of the pandals and take part in darshans from the most popular pandals of Kolkata. While doing so, attendees would be able to claim four NFTs of her idols that have been designed especially for the occasion, each correlating to one of the pandals."

Outlining the vision further, Sukrit Singh says, "The worlds of digital and real life are colliding, where we will constantly toggle between the real and metaverse worlds in the future. This is the first time in history that such a massive festival of devotion has been twinned in the Metaverse.

"We are piloting it with four pandals this year, with over 100 next year, and in the near future, every single pandal on the ground will have a metaverse twin for people to experience and enjoy."

Metaform and XP&DLand’s plan centres around 3D recreations of the pandals, where users in 'Spatial', a metaverse platform, can enter a shared social space where people from across the world can come together and walk around, interact, and even take photographs. Users can make a meta-realistic avatar of themselves in minutes.

The platform is accessible to all through simple smart phones, tablets, and wearables.

Suveer Bajaj, Co-Founder of Metaform and XP&DLand, says, "We are democratising the Metaverse. You don’t have to be in Kolkata now to celebrate the Pujas.

"Meta pujos will allow people from all over the world to enter pandal meta twins as family and friends – separated by physical distance but united in the meta celebration."

MetaPujo will introduce four unique NFTs of Maa Durga idols from the most visited pandals of Kolkata; these include Deshapriya Park, Tala Prattay, Ahiritola Sarbojanin, and Ballygunge Central. The four NFTs will be dropped for free on XP&DLand, for devotees and collectors who may want to claim them using their Web 3.0 wallets.

Suveer Bajaj, Co-Founder, Metaform, adds, "Introducing the concept of digital ownership, in addition to presenting these immersive experiences, we intend to drop digital collectables or NFTs, which can be purchased. These digital tokens will then, over time, generate a value given their real-life utility.

"In the future, the idea is to monetize the collectables and drive community with utility (whether for community, experiences, or collectables) at a later stage with the intent to build a self-sustaining business."