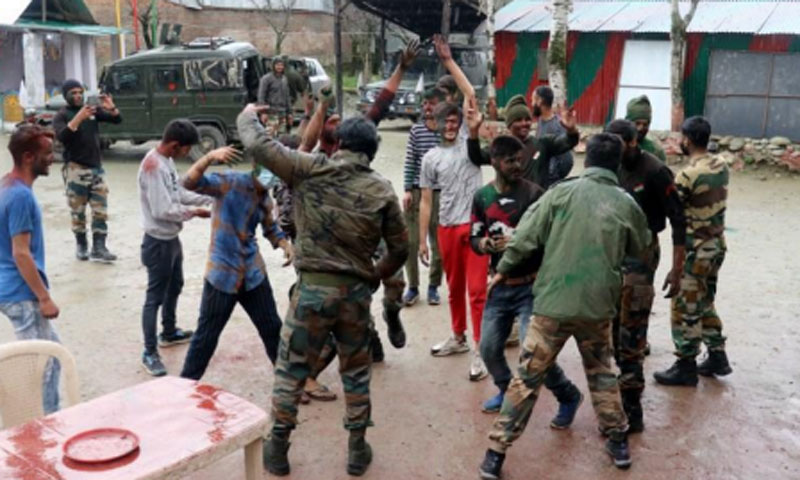 Holi celebrated across Jammu and Kashmir

Srinagar: The festival of colours, Holi, was celebrated on Monday with traditional fervour and gaiety across Jammu and Kashmir.

Members of the Hindu community celebrated the festival by splashing colours on their family and friends.

Muslims also visited the Hindu neighbours and greeted them.

They also exchanged and distributed sweets.

The shopkeepers in Maharaja Bazaar here, famous for selling festival celebration products, had announced rebate on such products in view of the festival.

Many security establishments in Kashmir had erected banners wishing people on the occasion.

The paramilitary and army troopers gathered in their camps and danced to the beats of Holi songs besides splashing colours on each other. Many tourists also celebrated the festival in Kashmir and also received warm wishes from locals. The celebrations were also held at famed Mughal Gardens in Srinagar with tourists enjoying music amid beautiful scenes of the Dal Lake.

The students came in colourful dresses and threw different dry colours on each other. Some of the schools also distributed stationery among needy students, reports said.

The markets in the winter capital also wore a festive look, while temples and residential houses decorated with floral buntings. LG, Advisors, DGP greet people: Lieutenant Governor Manoj Sinha, Advisors to Lieutenant Governor, Rajeev Rai Bhatnagar and Farooq Khan, and Director General of Police Dilbag Singh extended heartiest greetings to the people on Holi. In his message of felicitations, LG Sinha observed that Holi, a spring festival of colours, is an integral part of the rich composite culture, which promotes the tradition of ‘unity in diversity’ and strengthens the social fabric.

“May this colourful and vibrant festival foster the spirit of togetherness amongst the people, and bring prosperity and happiness in everyone’s life,” the LG said.

“I extend my warm greetings and good wishes to the people on this joyous occasion.” Advisor to LG, Rajeev Rai Bhatnagar, in his message said that this festival reminds of the vibrant colours of the multi-cultural society and diversity and is an occasion to forge new bonds and feelings of compassion among fellow citizens.

Advisor Khan said that Holi is the festival of colours which promotes communal harmony, mutual brotherhood and unity among all walks of life.

He also prayed for peace, prosperity and progress of Jammu and Kashmir.