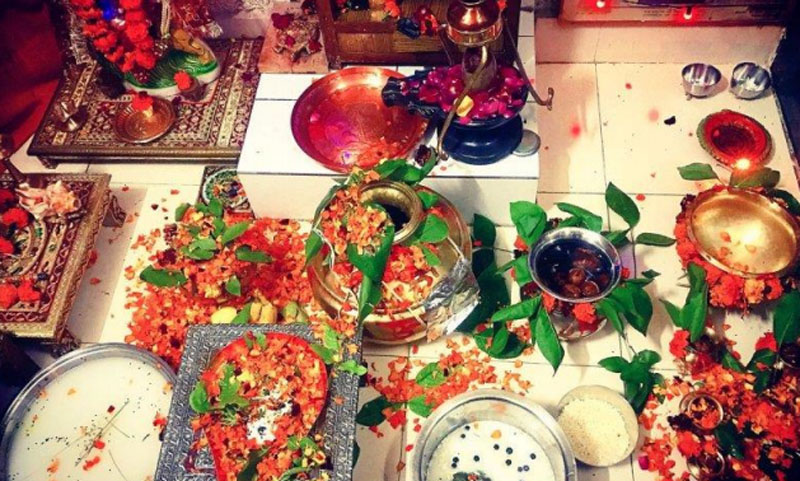 Herath celebrated across Jammu and Kashmir with religious gaiety

Srinagar: Maha Shivratri, locally known as ‘Herath’, was celebrated with religious fervour and gaiety across Jammu and Kashmir on Wednesday.

Pandits paid obeisance at temples and offered Puja on the occasion.

The biggest gathering on the festival was held at Shankaracharya Temple overlooking the Dal Lake in Srinagar.

The special prayers were also held at Ganpatyar and Hanuman Temple at Amira Kadal in Srinagar throughout the day.

The festival holds an important place among the Pandits, who celebrate it to mark the wedding of Lord Shiva with Parvati by cooking traditional Kashmiri food, especially fish.

Hundreds of devotees thronged Mata Kheer Bhawani Temple at Tullamulla in district Ganderbal. On this festival, the Pandits distribute walnuts as a mark of respect to the Hindu deities.

The temples were decorated with different colours and flowers.

“Maha Shivaratri, locally known as Herath, calls for a night devoted to worship of Lord Shiva. This event happens to be in the intervening night of 13th and 14th of the month of Phagun Shivaratri, it holds immense value for Hindus and is a big day for the devotees of Lord Shiva,” he added.

Ashok Bhat, another Kashmiri Pandit said that they were overwhelmed by the greeting messages received from Muslim brethren.

“Social media was abuzz with greeting messages posted by our Muslim brethren. I also received scores of messages while my Muslim friends also greeted me and my family on phone and by paying visit to us on this occasion,” he said.

He added that the festival is a symbol of communal harmony for ages, adding, “Rainfall on Herath was overwhelming and a good omen.”

An official said that Fishers Department had made available fish at different stalls in Kashmir, including in the summer capital Srinagar.

Lt Governor extends greetings Lieutenant Governor, Manoj Sinha has extended his heartiest greetings to the people on the eve of Maha Shivratri celebrated as Herath by Kashmiri Pandits.

In his message of greetings, the Lt Governor observed that this festival symbolizes the values of devotion and harmony, which are the hallmarks of glorious tradition & cultural ethos of J&K.

He hoped that the festival would strengthen the bonds of communal harmony, peace and amity amongst all in the society. My greetings to all on the auspicious occasion of Mahashivratri. I pray for sustained peace and development in J&K and well-being of its people, said the Lt Governor.

Meanwhile, National Conference President Farooq Abdullah and Vice President Omar Abdullah greeted people on the occasion and expressed the hope that the festival would be celebrated in a spirit of harmony.

The Deputy Commissioner (DC) Anantnag Anshul Garg was the Chief Guest on the occasion. The programme as part of PMKVY was organized by District Skill Committee in collaboration with ITI Anantnag. Around 18 firms including Peaks Auto Pvt Ltd; Tata Fair deal Motors, Kashmir Electricals, Zenith Group etc displayed their stalls to show-case the opportunities being provided by them. 170 youth were registered on-spot for their placement in respective firms. Among others, the event was attended by ADC Gulzar Ahmad Bhat, Joint Director Skill Development, Farooq Ahmad Khan, Principal ITI, Muzafar Ahmad and officers of DIC.