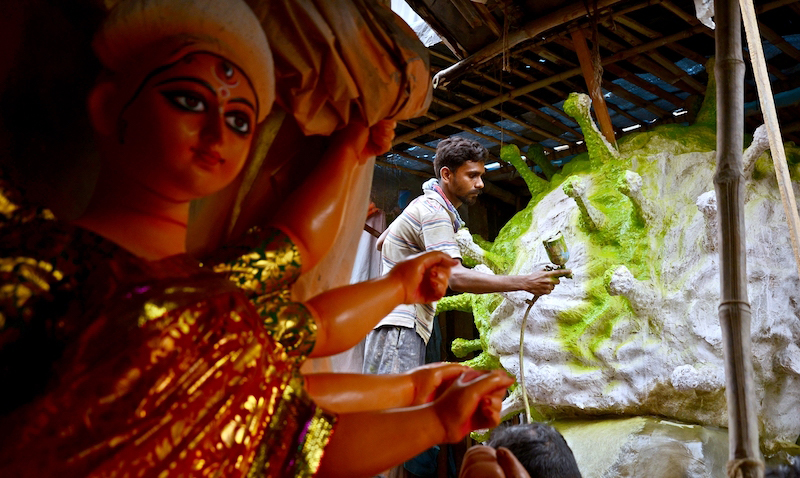 DurgaPuja2020
An artist in the idol makers' colony Kumartuli paints a model of coronavirus as West Bengal ushers in Durga Puja under the shadow of Covid-19.

Durga Puja in neo-normal: A tug of war between hope and despair

The year 2020 has so far not failed to stun the human race. Of course, the world has been thrown out of its gear thanks to the deadly novel coronavirus but little did we expect that Durga Puja in Bengal would witness a grim reality of beautiful marquees without its soul-the people.

Durga Puja or Durgostava, the annual Hindu festival originating in the Indian subcontinent which reveres and pays homage to the ten-armed Hindu deity Durga along with her four children, has always been synonymous with fun, fiesta and mighty celebrations in which people of all faith participate spontaneously.

The festival-which is observed with much grandeur and fervour in the eastern state of West Bengal-has been for decades not just a part of the culture but is known for bringing fresh lease of life to millions of Bengalis across the country and even abroad. 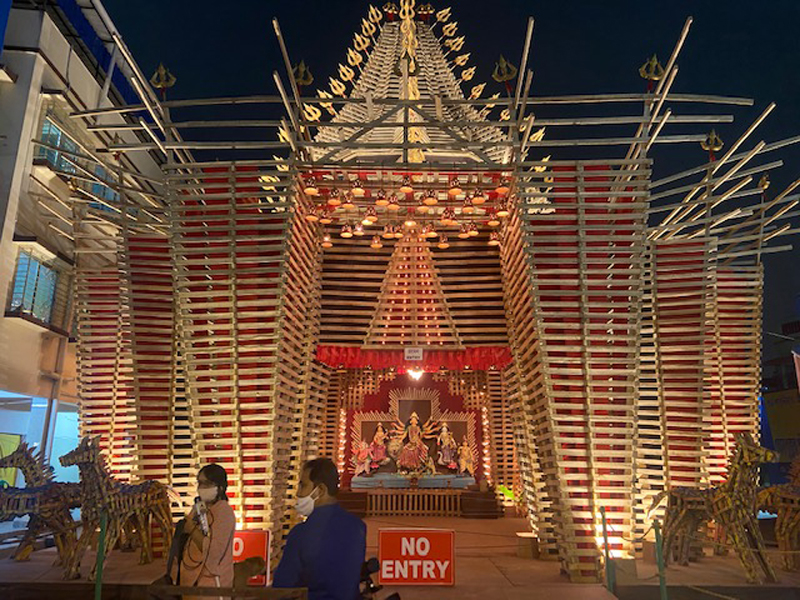 The five days of puja during which Goddess Durga along with her children- Laxmi, Saraswati, Kartik, and Ganesh-is believed to leave her abode in Kailash to be with humans on Earth are not just auspicious but every Bengali awaits round the year.

Puja Parikrama 1: Glimpses of the goddess amid a pandemic

Goddess Durga's homecoming is an excuse for all non-resident Bengalis to return to their motherland or state and reunite with their families as they celebrate the rituals and festivities.

The city of joy-Kolkata-particularly turns into a big stage of carnival adorning the jewels of pandals (marquees) with an array of lightings and of course the unmissable big hoardings typically spotted during the Durga Pujas. 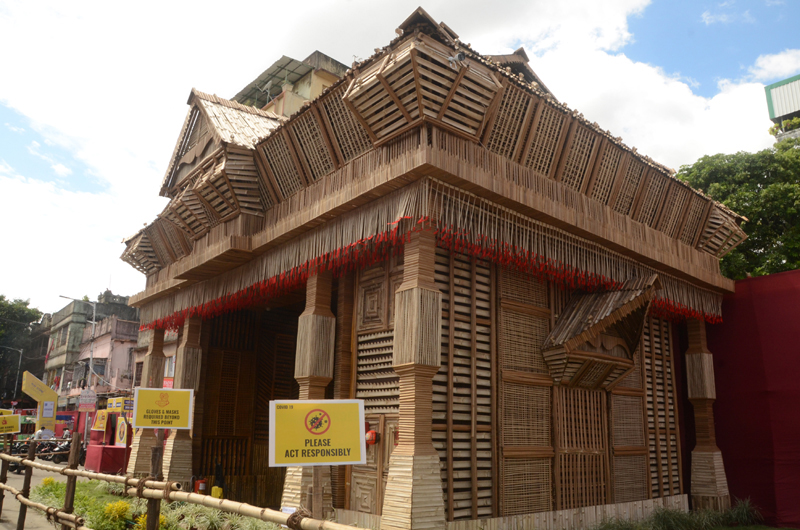 The five days just pass off in frenzy as people get engrossed in pandal hopping to grand addas (chatty get-togethers) to street foods and finally to Sindur Khela (a ritual observed by married women) which rings the bell for the immersion of Goddess Durga amid huge processions and frivolity.

The degree of happiness soars high in Kolkata during these five days and people from all walks of life tend to leave behind their tensions and sorrows often losing track of days and dates.

Puja Parikrama 2: Glimpses of the goddess amid a pandemic

Yes, the wait is over and the Durga Puja carnival finally started but has it really? Sadly, the year of topsy-turvy brought in a big disappointment to all the Durga Puja celebrations too. 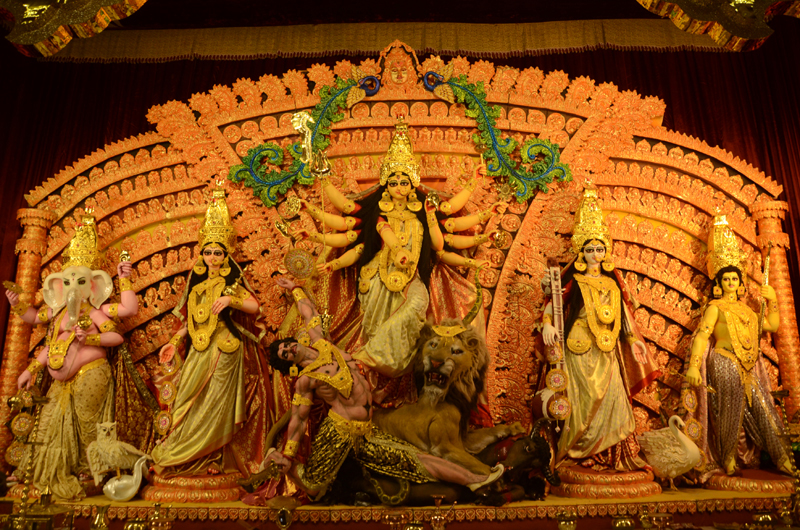 It is believed that worshipping of Goddess Durga epitomises the victory of good over evil but this year even the deity herself failed to bring in joy over the coronavirus pandemic horror.

Puja Parikrama 3: Glimpses of the goddess amid a pandemic

Several marquees have also adopted the theme of sorrow and projected the sufferings of migrants and others during the last few months through their creations.

With the Calcutta High Court ruling that all Durga Puja pandals across West Bengal should be marked "No-Entry Zones" and barred visitors from entering the marquees, the revellers had to once again opt for the virtual space to taste the festivities. 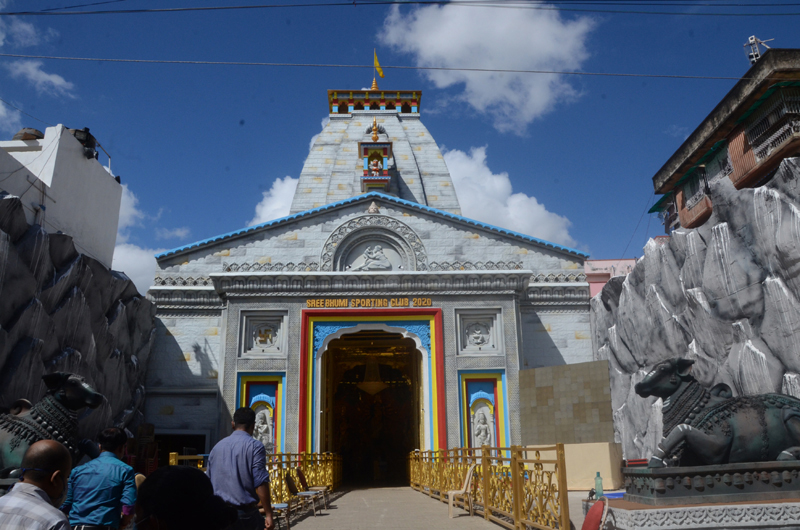 Popular pandals-like Shuruchi Sangha in South Kolkata to Bagbazar Sarbojonin in North Kolkata-which used to have challenging times every year in controlling crowds had to close their doors to pandal hoppers, making alternative arrangements for virtual hopping.

Puja Parikrama 4: Glimpses of the goddess amid a pandemic

Even the key highlights during pujas like offering Anjali on Ashtami morning, being a part of Sandhi Puja or the ritual of bhog/prasad distribution have to be curtailed this year with the court allowing only organising committee members inside the pandals.

Several organisations have planned to use or are already using social media platforms to showcase the rituals and their spectacular creations. The focus this year is on sanitisation to attempt in keeping the virus at bay. 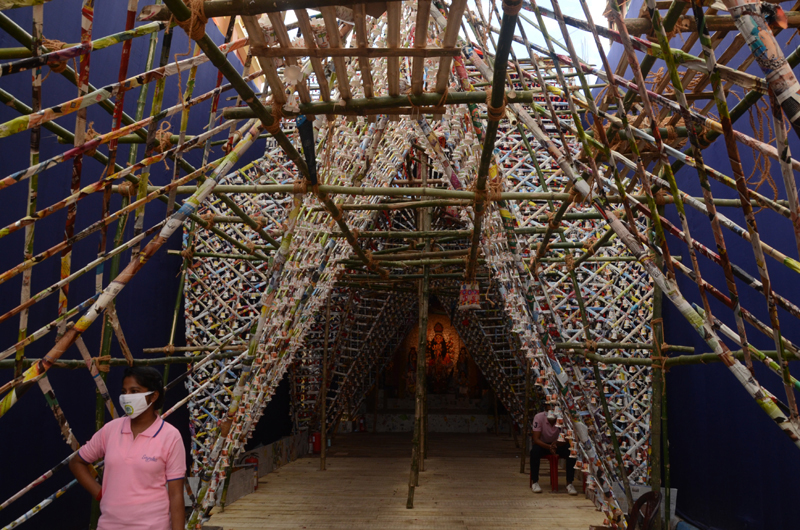 Kolkata’s Durga Puja is not just an affair of fun and celebrations. The five days generate a huge economic boost to the state, providing jobs to over 1 lakh people for nearly six months. With over 10,000 pujas in the state, the festival has emerged as a hub of economic activity in Bengal.

From those erecting the pandals to the decorators, idol-makers to craftsmen, electricians to security persons, priests to dhakis, Durga Pujas offer a boost to the earnings of thousands of people across the eastern state. 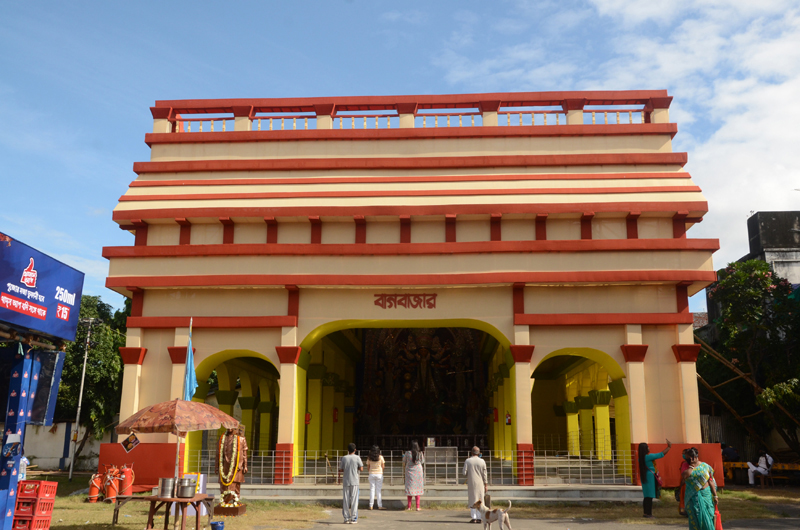 As per an ASSOCHAM report in 2013 the size of the economy due to the festival was estimated at INR 25,000 crore. Going by that, The Hindu in its report projected size of the Durga Puja economy to be about 2 lakh crore in 2020, around 13-14% of West Bengal’s GDP.

Puja Parikrama 5: Glimpses of the goddess amid a pandemic

There are several street hawkers who make their annual income banking on just these five days by selling various street food items and what Kolkata witnesses this year are mostly deserted stall areas amid a scare to contract the highly contagious virus.

Durga puja is also that time of the year which brings out the shopping spree tendency among middle-class Bengalis who make it a point to wear new clothes during all five days. However, the prolong lockdown followed by the surge in the cases of coronavirus dampened the spirits of Kolkatans mostly. 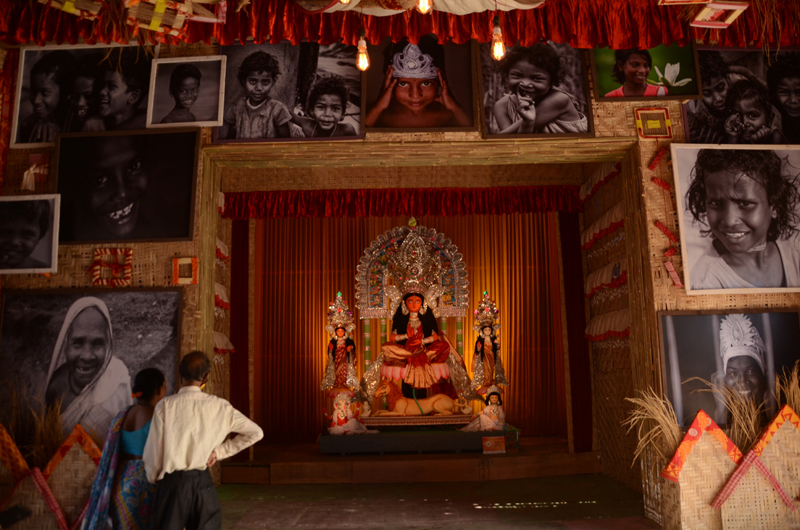 Also, when some actually did crowd the shopping centres in New Market and Gariahat, it quite expectantly led to a massive jump in the spread of infections. Alas! once again the virtual marketplace through all the popular e-commerce sites took over giving a serious blow to the businesses of small-time retail outlets and hawkers.

Puja Parikrama 6: Glimpses of the goddess amid a pandemic

As we observe Durga Puja this year, it turns out to be the tussle between hope and despair as well as the eternal tug of war between what our minds wish to do vs what we are forced to do.

Nevertheless, the human race had survived several rough patches through ages with the weapon of optimism and this too shall pass. It seems like the revellers have already accepted the truth with mighty hope for 'social' celebrations next year evading the norms of 'social distancing'.