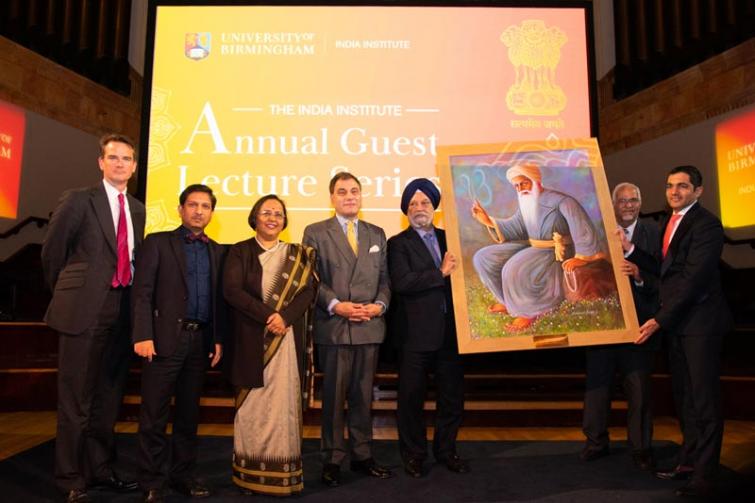 Guru Nanak Chair to be hosted at the University of Birmingham

Birmingham/IBNS: The University of Birmingham will host a prestigious academic Chair to promote research into the life and philosophy of Sri Guru Nanak Dev Ji, the revered first Sikh Guru.

The search now begins to find an academic expert to hold the Sri Guru Nanak Dev Ji Chair and work closely with relevant parts of the University, including the Edward Cadbury Centre for the Public Understanding of Religion, and the Jubilee Centre for Character and Virtues.

Working with the University’s India Office, in New Delhi, the Chair will engage with partners and communities in India to create fellowships in peacebuilding, inter-faith understanding and community cohesion - reflecting the three core values of Sri Guru Nanak Dev Ji.

They will also seek major funding opportunities to advance research into the Guru’s life and teaching. Minister Hardeep Singh Puri commented: “The University of Birmingham is most suitable for the Chair given the strength of its academic offering, its close connections to the vibrant Sikh community, the larger British Indian community of the UK, and its history and continuing commitment to India."

“Equally, the City of Birmingham, in the heart of the United Kingdom, with its rich and diverse religious heritage, and its diverse population, is an ideal place for the Chair to be located.”

The University's relationship with India is a long one, beginning in 1909 with the first cohort of Indian students arriving in Birmingham to study for degrees in Mining and Commerce. Since then, the University has provided education to around 2,000 outstanding Indian students.

Birmingham was the first UK university to establish a lectureship in Sikh Studies and is the only Russell Group university to have a programme (MSc in Sikh Studies) in this field. Given its rich history and connections to India, the University launched its India Institute in 2018.

High Commissioner of India to UK, Ruchi Ghanashyam, congratulated the British-Indian community for its partnership on various projects to celebrate the auspicious occasion of 550th birth anniversary of Sri Guru Nanak Dev Ji, whose life and teachings inspire Indians belonging to all faiths across the globe.

“This is a great opportunity for that eternal message of the revered first Sikh Guru to be shared with the British community, and the larger world community,” she said.

Consul General of India in Birmingham, Dr. Aman Puri commented: “I am delighted that the University of Birmingham has partnered on this prestigious academic Chair, as its India Institute is playing such an important role in improving collaboration between India and the UK."

The University of Birmingham is among the global Top 100 universities, and founder member of the elite Russell Group of research-intensive universities. Its Department of Theology was ranked second in the UK in the last Research Excellence Framework (REF) exercise, in 2014.

“We are proud of our education and research links with India, particularly in those fields that resonate with the teachings of Sri Guru Nanak Dev Ji. We believe this Chair will help further deepen and strengthen links between our academic community and the Indian diaspora.”