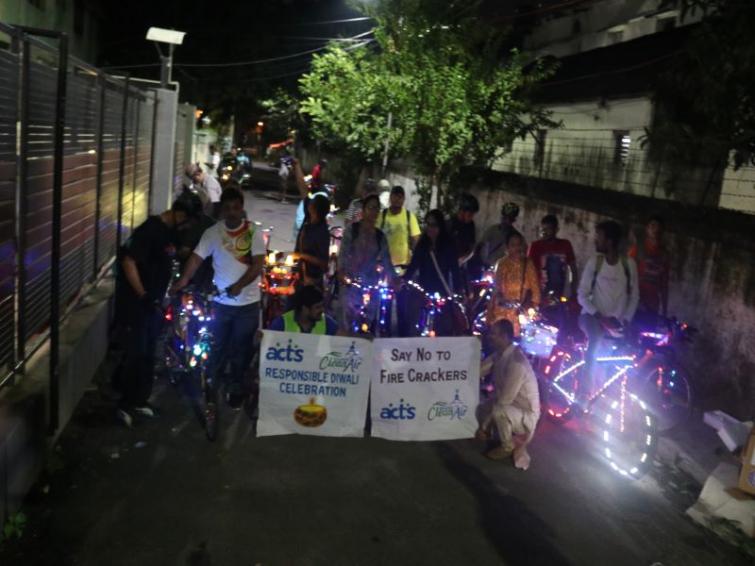 Kolkata/IBNS: A cycle ride was organized here on Saturday with a message to say no to firecrackers and reduce the levels of air and sound pollution in the city.

The ride was part of a Responsible Diwali Celebration of ACTS and  Kolkata Clean Air, along with other NGOs like Switch ON Foundation, Kolkata Cycle Samaj, Bike Studio and Educare Foundation.

Active citizens from all walks of life came together with their cycles decorated with LED lights and colourfull streamers - to share the true essence of Diwali.

The activities started with Rangoli making and dance performances at Old age homes and Children's Homes, which then concluded with a visit to an animal shelter and ended with a bicycle ride that commenced from Bhawanipore and culminated at Garihat.

The ride created awareness on the harmful effects of bursting firecrackers on environment, especially when the winter has set in.

Cyclists requested Kolkatans to ‘Say No to Firecrackers’ and choose pollution-free celebration options instead.

“I will advise that don't burst firecrackers, and I am confident that children themselves will ask parents to not buy firecrackers, but if someone wants to then buy green firecrackers,” Javadekar had said.

In his appeal, Hakim had said, “We will enjoy the festival of lights, but just after Diwali the winter comes, and at that time the pollution is highest, so we have to be carefull and don't do anything that pollutes our air.”

The organisers of the event hoped that the city will develop infrastructure to make cycle the preferred mode of transportation, in the same manner, it is taking the lead in adopting electric vehicles.

Many studies have proven that Motor vehicles are the leading cause of pollution in Kolkata and In addition to this challenge, vehicles are also clogging our city and congestion is making commute increasingly difficult.

The team under the Responsible Diwali Celebration drive had released a video that has been shown in various schools with reasons on why not to burst firecrackers and also offered alternative solutions.