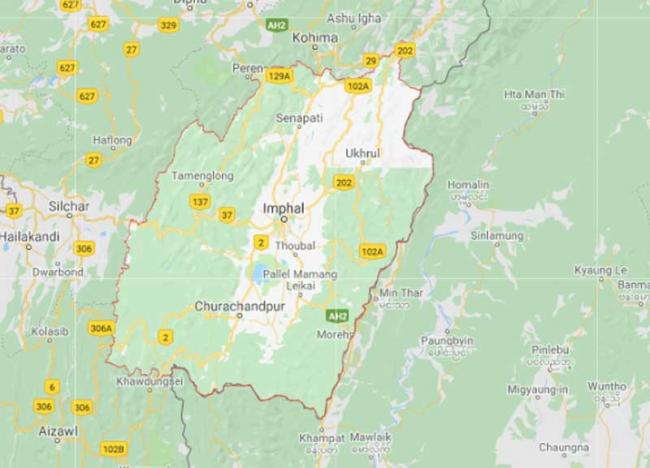 Guwahati, Jan 26 (IBNS): The 70th Republic Day was celebrated in Manipur at the historic Kangla Fort on Saturday.

Gracing as Chief Guest of the function, Governor Dr. Najma Heptulla unfurled the Tricolour and inspected the guard of honour accorded by a contingent of 5th IRB commanded by Bidyapati Thingbaijam, DSP 9th IRB (Mahila).

Altogether 20 cultural troupes from various communities and organisations across the state showcased their mesmerizing cultural performances.

A total of 18 tableaux of various Departments, including Forest, Manipur Fire Service, DIPR, Education, Social Welfare, Health among others, showcased their departmental activities and services for the welfare of the people of the State. Giant gates were erected along the March past routes by various departments.

Chief Minister N. Biren Singh delivering vote of thanks at 1st MR Battalion Ground and assured the people of the State that the government stands for the protection and integrity of the people of Manipur.

He said the Government will not take up any steps that will affect the sentiments of different ethnic communities living harmoniously in the state.

He also maintained that the government will not remain silent if there are any elements in the Citizenship Amendment Bill (CAB) that will cause threat to the integrity of the indigenous people of Manipur.

The Manipur CM appealed to the people to thoroughly familiar with the contents of the bill before resorting to any forms of protests.

He urged the people not to resort to any kinds of agitations like bandhs, blockades, strikes, etc. especially in Imphal as it hampers the economic development of the entire state.

He reiterated that the Home Ministry has given assurance that the bill will not be implemented in the States without the prior consent of the State Government.

The Manipur CM urged all civil society organisations of the state for open dialogue and discussions along with legal experts.

The state government took a decision regarding the introduction of the Manipur People’s Bill in the State Assembly so that the Centre Government may not take up anything without prior consent of the state government in connection with CAB, he added.

It may be mentioned that Republic Day were celebrated in all the District Headquarters of the State.