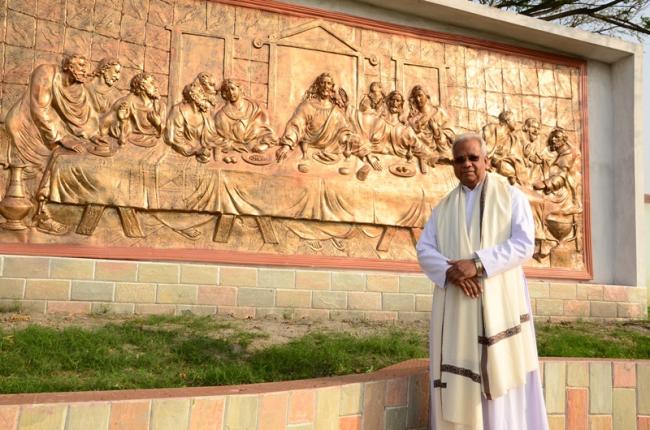 Kolkata, Dec 25 (IBNS): The oldest church in Eastern India, Bandel Church, has chosen to promote caring for mother earth as its Christmas theme this year.

Also, a newly erected 20 feet mural of 'The Last Supper' would be an added attraction for the thousands of visitors who visit the 418-year-old Marian shrine on the banks of the river Hooghly, 40 kilometers from Kolkata, the state capital.

A giant Christmas crib made of bio-degradable and environment-friendly materials, depicting the birth of Jesus, has also been erected.

Another added attraction for the visitors this year would be a rare representation of Jesus as Good Shepherd juxtaposed with Mother Mary holding Jesus in one hand and a lamp in the other.

The Marian shrine is one of the oldest churches in eastern India founded in 1599 by the Augustinian monks.

The Bandel Church, declared a mini Basilica by Pope John Paul II, is dedicated to Nossa Senhora do Rosario - Our Lady of the Rosary.

In his Christmas message to the masses, Prior of Bandel Church, Salesian Fr T L Francis, said, “Giving and sharing with a view of building a new heaven and new earth where nature is taken care of and we live in peace.”

This year, the Bandel Church is expecting record number of visitors as the Xmas eve is on a Sunday, followed by Christmas on Monday.

The steady flow of visitors to the Bandel Church usually continues till the New Year day.

“Each year over 100,000 visitors, cutting across religious beliefs, visit the Bandel Church during the Christmas season. along with larger-than-life sized statues of popular Christian saints like Mother Mary, Mother Teresa, Don Bosco, St Joseph, St Augustine, St Francis Xavier and others. There is also the life size Station of The Cross depicting 14 scenes from the final hours of Jesus’s life with 54 statues and a Christmas crib depicting the birth of Jesus,” said Fr T L Francis said.

This year, the elements in going green is construction of the crib with natural materials like bamboo, jute, and moss.

“We wanted to convey the Christmas spirit through Mother Mary who nurtures and cares for Jesus. The Mother also takes care of the weak and helpless among the creation of her divine son Jesus. The 20-feet mural of 'The Last Supper' would be an added attraction,” said Subrata Ganguly of Kolkata-based firm Church Art, which specialises in designing art work for churches, museums and schools in India and abroad.

The Bandel Church had in recent years restored and put on display the historical “mast” which had fallen in the storm that struck on 9th May 2010.

The Portuguese ship’s mast was a votive offering to the Church from the captain of the ship that was miraculously saved in a tempest in the Bay of Bengal in 1655.

The Archaeological Survey of India had declared the mast a heritage item.