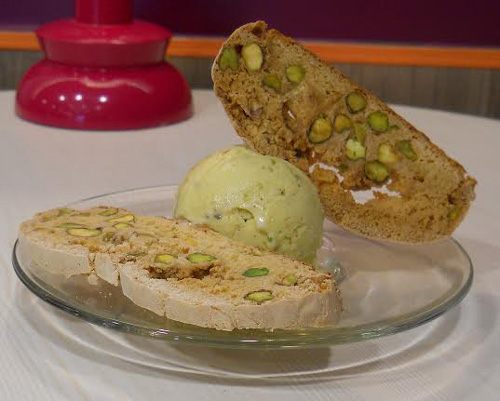 India Blooms News Service | | 29 Aug 2014, 01:37 pm
#Mama Mia, # new address in Kolkata
Kolkata, Aug 29 (IBNS) The pioneer of gelato, Mama Mia! announced the launch of its third gelateria and introduced its two new enthusiastic owners, and of course a whole new range of products and flavours. Present at the occasion on Wednesday at its new standalone store on Loudon Street to support the brand was Italian consulate Cesare Bieller.

Adhiraj and Akshat introduce to Kolkata for the first time the concept of Artisanal flavours keeping up to the Mama Mia! tradition. They are featuring unusual flavour combinations such as Berries and bluecheese gelato with a hint of rosemary (called the cheese platter) served with crackers and pecan nuts, basil cucumber and rose sorbet, caramel popcorn, sweetcorn and rocksalt, sesame walnut and honey, and pistachio biscotti, all for Rs 119+ taxes.

These flavours are only available as a limited feature and only from stores till stocks last. Gourmet gelatos are handcrafted and balanced by Akshat and Adhiraj personally. Besides gelato flavours, chocolate fondue platter is also a new addition, for Rs 319+taxes, made with their signature decadent chocolate truffle and accompanied by six new flavours of brownies, such as peanut butter, chocolate orange, dark fudge, and cakes of various kinds, and dulce de leche apple pie and chocolate glazed chocolate tart.

The third standalone store after Ballygunge and New Alipore this is a fifteen-seater at 12, Dr UN Brahmachari Street, Loudon Street. The kiosks at Quest Mall and City Centre New Town, and a shop-in-shop with every Inox, were launched earlier keeping up with the phenomenal pace they expand even further. “We wanted a contemporary look which is reflected through the rough surfaces, warm wood, naked lights and pipes. Basically, gelato is a cold food item, so we have made the look deliberately warm to offset the cold feeling,” explained Adhiraj.

The concept of artisanal flavours is first of its kind in the country. “It’s an unusual or very exclusive flavor of gelato presented with flair. It’s experiencing dessert/gelato with an edge of fine dining perspective. Kolkata has a dearth of continental dessert places; it’s our endeavor to make Mama Mia! the dessert destination of the city,” explains Akshat.

“We try and come up with gourmet combinations that make for unusual experiences. We want to try and break mould and shift people from traditional chocolate and vanilla towards more experimental flavours. We would like to showcase an international experience,” said  Adhiraj.