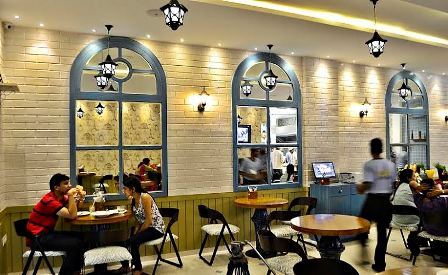 India Blooms News Service | | 30 Aug 2015, 08:02 pm
#Nosh and Bytes, # European cafe in Kolkata
Kolkata, Aug 30 (IBNS) Yet another European themed cafe has come up in the erstwhile second capital of British empire, with the owners claiming that they are hopeful about the cuisine retaining its authenticity.

“The idea of setting up another European café cum restaurant in the city of the Gourmet came to my mind while travelling in Rome and Milan, and later London during my European tours," Owner, Nosh and Bytes, Santanu Mullick, says.
However, unlike the bright hues in the interiors of other cafes in the city, "we have made the color scheme of roof and walls muted yellow and creamish while tinted glasses in false windows and a hanging clock bring effects of the non-sunny London weather." "And it is not a bistro," Mullick says.
Some of the signatures dishes like - Spaghetti Bolognaise (spaghetti tossed in minced seasoned lamb meat), Pollo Alfredo (chicken cooked in cream cheese sauce and served with penne), Risotto Pollo Rustica (roasted thyme chicken with creamy Arborio), Gamberino Portofino (prawns tossed in Portofino sauce and served on bed of spaghetti aioli), retained the typical Spanish/Italian flavour.
"In the pizza section we are for the first time introducing Kolkatans to Peri Peri (san marzano tomato, morzana and spicy vegetable with peri peri chilli), Pizza Agnello (spiced and marinated minced lamb pizza), and  Pollo Genovese (grilled chicken, san marzano tomato and basil pesto) and as the names will resonate we will not tinker with the tastes," he says.
The veg dishes includes Penne Paprika (penne in cream paprika sauce), Pesto Spaghetti (spaghetti in creamy pesto), Risotto Quattro Formaggi (four cheese mixed with creamy Arborio).
The all-day dining hall of European delicacy will also offer dessert Crème Brule in its original flavour, besides the sandwiches and pastas, he says.
Most of the ingredients will be brought from Delhi.
"We are mostly targetting the young crowd of nearby colleges like St Xavier's and schools like La Marts many of whose students had been to these countries with family. And interesting 80 per cent of our customers are again girls which make us attentive towards the cuisine preferred by women," Mullick says.
Live musical performances could be order of the day in this cafe in future. "We want to make it a happening place," he says.
Related Images