The sweet taste of environment-friendly chocolates

A few start-ups in southern India are adopting sustainable and conscious practices to develop organic chocolate bars which have a niche but growing market in India. Mongabay India writer Deepanwita Gita Niyogi reports

Though still a niche market, “environment-friendly chocolates”, which are being developed with low-waste processes and social consciousness, are gaining a steady, loyal customer base in India.

For Nitin Chordia, the founder of Kocoatrait, it all started with a backpacking trip to Belgium and France where this entrepreneur from
Chennai learnt the ropes of chocolate making. Back home, in 2019, he and his wife Poonam started manufacturing what they call bean-to-bar chocolates, where they purchased the beans directly from cocoa farmers and were involved in the roasting and grinding process themselves.

The chocolate making process also imbibed circular economy principles where waste is reduced and the resources are put back into the product cycle in a continual manner. “Our brand focuses on the wrapper of the product. A huge quantity of plastic waste used to wrap chocolates finds its way to the oceans,” Chordia said while narrating the story of a deep sea diver who found a chocolate wrapper at the bottom of the ocean.

To keep the wrapper of their chocolate plastic-free, the couple uses discarded cotton cloth materials, reclaimed from garment factories in Coimbatore in Tamil Nadu, along with cocoa shells, which are also waste products after roasting that end up in landfills. “From the very start, we were determined to be plastic-free and reclaim waste materials discarded by other industries to make the wrapper.

So, basically these two things are used to make our wrapper for the chocolates with no addition of wood pulp. After consumption, the wrapper can be used for other purposes, like a bookmark or a greeting card, without it going directly going into the bin as is the case with many conventional chocolate brands,” he said. The packaging is also exactly the size of the bar and nothing is extra. About 50 percent of their customers reuse the packaging, says Chordia. 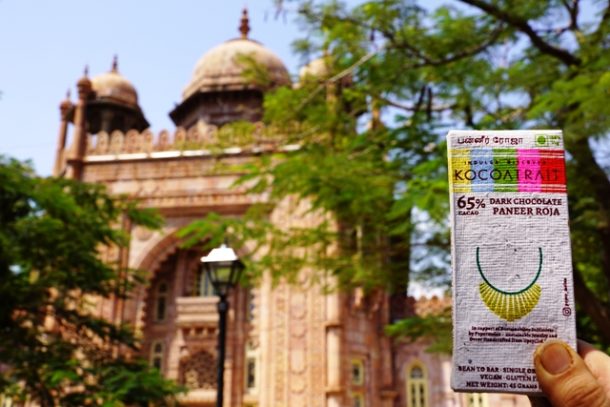 Nitin Chordia of Kocoatrait chocolate brand which operates from Chennai offers chocolates made of organic cocoa sourced directly from farmers. The outer wrapper of the chocolate is free of plastic and wood pulp and can be reused or recycled. Photo by Nitin Chordia.

When in Europe, Nitin went around tasting chocolates and understood that cocoa has its own flavour and nothing needs to be added to it,

narrates Poonam. That is why the brand offers only dark chocolates with minimal use of organic sugar.

Chordia pointed out that following the COVID-19 pandemic, there is an increased awareness about the environment which has encouraged them to expand their reach. During the pandemic their production capacity expanded and at present, they make 1,500 bars a month in their Chennai factory which are sold at Rs. 235 for a 45 gram bar. The brand launched in 2019 in Amsterdam sells across 35 stores in Chennai and has also started stocking in a few stores in other cities besides being available online.

The incorrect disposal of plastic and plastic packaging, which does not decompose, is a significant problem. Globally, 26 percent of the total volume of plastics used goes into packaging and only 14 percent of it is recycled.

India generated an estimated 3.36 million tonnes per annum of plastic waste during 2018-19, as per the annual report for 2018-19 on Plastic Waste Management Rules by the Central Pollution Control Board. On an average, around 5.6 million tonnes per annum (TPA) of plastic waste is generated in India, which is about 15,342 tonnes per day (TPD).
Around 70 percent of total plastic consumption in India is discarded as waste.

Atin Biswas, programme director, municipal solid waste, Centre for Science and Environment based in Delhi, said it is difficult to predict what the share of the plastics used is for food packaging. And even when there are claims of a material being biodegradable, the question is how many years does it take to biodegrade, he said, adding that humans are exposed to huge health risk because of ingesting micro plastics that makes its way into food.

“We cannot go on producing something which is not recyclable. The India govt (MOEFCC) has indicated that it is planning to shut down establishments that produce single-use or multi-layer plastics. But we need a roadmap. Until we put a ban, the industry will not find any alternative,” said Biswas, adding that the new draft Plastic Waste Management rules, 2021 which was released recently, gives more clarity in this direction.

Kocoatrait’s chocolate wrapper, made of discarded cotton cloth and cocoa shells, is manufactured in paper making units in Lucknow, Puducherry and Bengaluru.

“After the wrapper is made, it is delivered to us. We then take it to an institute in Chennai, V-Excel Educational Trust, which employs differently-abled people for screen printing with water-based ink. So, the wrapper is biodegradable, compostable and recyclable. We are extending its life beyond the chocolate.” Chordia pointed out. The wrapper takes about six months to decompose and can be composted in a regalar composter, he notes.

As food safety regulations make it mandatory to wrap the chocolate in a foil apart from the outer wrapper, every Kocoatrait chocolate bar is wrapped in a pure aluminium foil without any plastic lamination. The foil can be resold and recyclable at the industrial level. Apart from transportation, everything else is zero waste, claims the entrepreneur.

No plastic is used and the cardboard box used for packing chocolates and sending to other cities online is reusable. The tapes used are also paper tapes. The companies choose to send the chocolates directly to its customers and not via online platforms to avoid the extra layer of packaging that aggregator platforms sometimes add.

In his factory in Chennai, Nitin and Poonam use energy-saving equipment like a cracker and winnower to process the. “We have not been able to switch over to solar power but that is  the ultimate aim. As our customers want it, we will soon make the switchover even though in the long term it will add up my production cost but we have to do it,” Chordia said.

Kocoatrait works with organic cocoa farmers based in Andhra Pradesh, Kerala and Tamil Nadu. Chordia added that one of the negative things about cocoa farming is that it is water intensive. But he explained that organic farms run on the concept of minimising waste.  The leaves which fall on the ground, for example, are used as manure and the cocoa pods or fruits also go back to the soil.

M. L. Jat, Principal scientist at CIMMYT (International Maize and Wheat Improvement Center), said while there are organic farms which
are not zero waste, there should be an emphasis on encouraging zero waste farming, be it organic or not.

David Belo’s chocolate brand, Naviluna Artisan Chocolate, was set up in 2012. “We are a small set up. But it is a long-term goal to go zero waste. However, it is not possible overnight as it is a challenging process, with difficulties in sourcing a complete biodegradable supply chain being one. There are nine employees at the moment and the focus in on good business,” Belo, whose brand functions under Earth Loaf Artisanin Mysuru, Karnataka, said.

However, recycled and biodegradable materials are used for packaging, there is a direct supply chain for ingredients and the cocoa used is organic, said Belo, director and executive chef at Naviluna. The outer wrapper of the product is plastic free and made of recycled cotton.

David has been working in food and drinks for the past 18 years, and has been making chocolates for the past nine years. The chocolates are made in Mysuru. According to him, Naviluna was started to create a global brand from a place which showcases the natural wealth of the subcontinent through craftsmanship, creativity and attention to detail.

Mason & Co. founded by Jane Mason and Fabien Bontems, which functions from Auroville, Puducherry, also makes chocolate with lower carbon footprints. Saraswathi Murthy has been working at the factory since 2013 when she was first spotted by the founders and currently manages the running of the plant. All the 17 women employed for chocolate making have been trained by her. 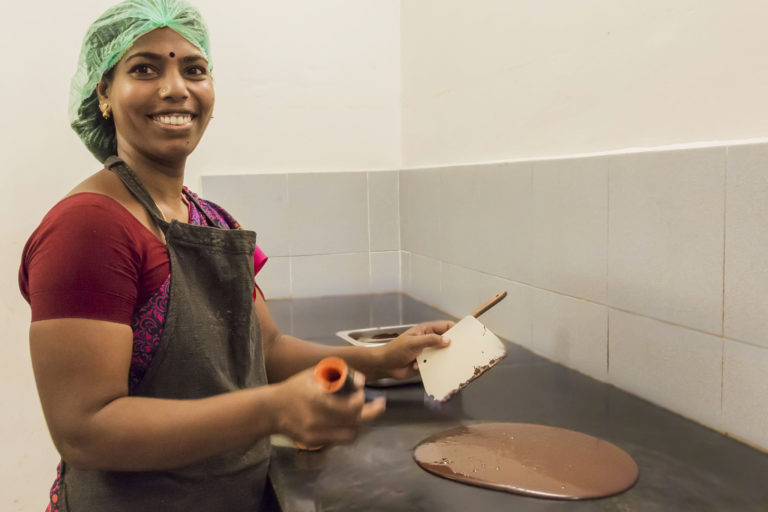 Saraswathi Murthy who leads the team in the factory, was first spotted by founders Jane Mason and Fabien Bontems and trained by them in 2013. Photo from Mason & Co.

At Mason & Co, most part of the chocolate is hand-made with minimal machine use. “The hand-made factor allows us to be more minimal and be in more control. Less waste is produced during hand winnowing. Most of the equipment used are mechanical ones and not power driven,” said Mansi Reddy, Marketing & Partnerships at Mason & Co. Reddy explained that there is a need to separate the outer shells from the beans and that is why cracking and winnowing are carried out. Winnowing is a three-step process. The first step involves hand winnowing. After that a winnowing machine blows off the shells and again the last bit of remaining shells is blown away by hand.

The cocoa comes from Kerala (a series of small farmers having 30-40 trees), Tamil Nadu and Karnataka. “People are eating consciously processed food. However, such chocolates are still a niche market but have a loyal consumer base,” Reddy added. Mason & Co reuses cocoa shells and sells them to different farmers living around Auroville for using as mulch in compost. The shells are also used in gardens.

Talking about the environmental impact of chocolates, Bhavna Prasad, Director, Sustainable Business, WWF-India said the main two raw materials usually used in chocolates are sugar and cocoa. Then there is palm oil too which is important to consider from a sustainability point of view because if the palm oil is not produced sustainably, it can lead to deforestation and have a negative impact on the environment. The goal should be to move towards sustainable palm oil, Prasad added.

Organic cocoa farmer N.V. John, who is based in Palakkad, Kerala, has a 10 acre farm where he grows cocoa as an intercrop with coconuts, areca nuts, pepper and nutmeg. One of the few organic cocoa farmers in India, he grows the cocoa without any chemicals and pesticides. In the past 10 years, John went fully organic and made the switchover.

“Chemicals are harmful for people and I thought of going organic. I am getting Rs 180 per kg for processed beans.”

Earlier, John used to get 1000-1500 kg yearly but now he gets around 800 kg of cocoa. Also, very few farmers are growing certified organic cocoa as there is not much of a price differentiation between conventional and organic cocoa, said a source associated with the industry, who wishes to remain anonymous. So, many farmers do not see the need to go organic.