The role of wildlife conservationists and rescuers, such as Aaliya Mir, is increasingly becoming important in the wake of frequent human-wildlife conflicts in Kashmir. A mathematician by training, she says changing people’s attitudes towards wildlife conservation is a key challenge.  Athar Parvaiz of Mongabay India reports

In the last week of December 2020, a video of a leopard scaling fences and roaming the streets in the Bagh-e-Mehtab locality near Srinagar, startled people in Kashmir valley. It was unusual to have a leopard, prowling in a human-dominated area in Kashmir. But in the last 15 years, leopards have adapted to an urban and semi-urban style of living in the region, said Kashmir’s wildlife warden, Rashid Naqash.

As the visuals circulated, creating a scare among local residents, many from the area took it upon themselves to launch an attack on the wild animal that they perceived as a threat to their lives.

Later, another video, that showed locals chasing the animal, made rounds on social media and was criticised by wildlife conservationists. Ultimately, the team from Wildlife SOS, led by Aaliya Mir, a wildlife rescuer in Kashmir, helped Kashmir’s wildlife department rescue the animal and release it in its natural habitat.

“It was a challenging operation, especially due to the snowfall. But we managed to track the leopard’s movement by following pug marks and observing faecal samples,” Mir said about that operation. “Operations like this can be quite nerve-racking as the team has to exercise caution while approaching such a large and powerful feline.”

There have been some incidents in the past when wild animals like leopards and bears were killed by mobs during human-wildlife interactions in Kashmir. The latest incident took place on February 24 when a leopard was killed in south Kashmir’s Pulwama district in a mob fury after the wild animal reportedly attacked villagers, injuring two of them. 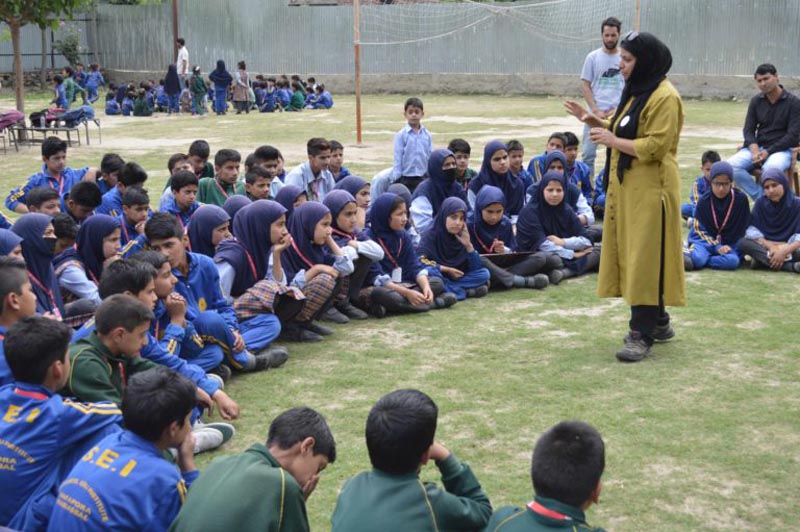 Mir during a training session with students teaching them about wildlife conservation. Photo by Wildlife SOS.

According to the official statistics reviewed by Mongabay-India, 44 leopards and 124 black bears have died because of retaliation or natural causes from 2012 to 2020, though separate data about how many have actually been killed in attacks is not available. In the past 14 years (from 2006 to 2020), as many as 242 people have died and 3,528 were injured in human-wildlife conflict in Kashmir. With natural prey base during winters becoming scarce, wild animals are often forced to venture into human habitations searching for food and shelter, wildlife experts say.

The leopard in the December 2020 incident is suspected to have come from the ‘Karewas’— elevated tablelands located near the Budgam-Srinagar division. “It was so satisfying to see the animal released into its natural habitat,” said Bilal Ahmad, who runs the South Asian Voluntary Association of Environmentalists (SAVAE), a Kashmir-based organization focused on  environmental policy in South Asia. “The leopard could have been killed by the people who felt
threatened,” Ahmad said.

Mir, who was at the forefront of the successful rescue operation, has so far rescued dozens of animals which include snakes, bears, birds, and leopards. Cool and composed, Mir has also rescued poisonous snakes from the residences of former chief ministers of Jammu and Kashmir, Omar Abdullah, and Mehbooba Mufti. She once used a fire-service ladder, said a wildlife enthusiast working in the wildlife department, to rescue an injured barn owl stuck on a huge chinar tree, a heritage tree of Kashmir with leaves resembling that of the maple tree.

A few years ago, Mir was able to rescue two bear cubs separated from their mother and had landed up at Srinagar’s Botanical Garden. Mir and her team tried hard to reunite the cubs and their mother; she amplified the cubs’ recorded voices near the forest to attract the mother’s attention but without any luck. Ultimately, Mir and her team shifted them to Dachigam National Park, where she kept feeding them milk until adulthood. 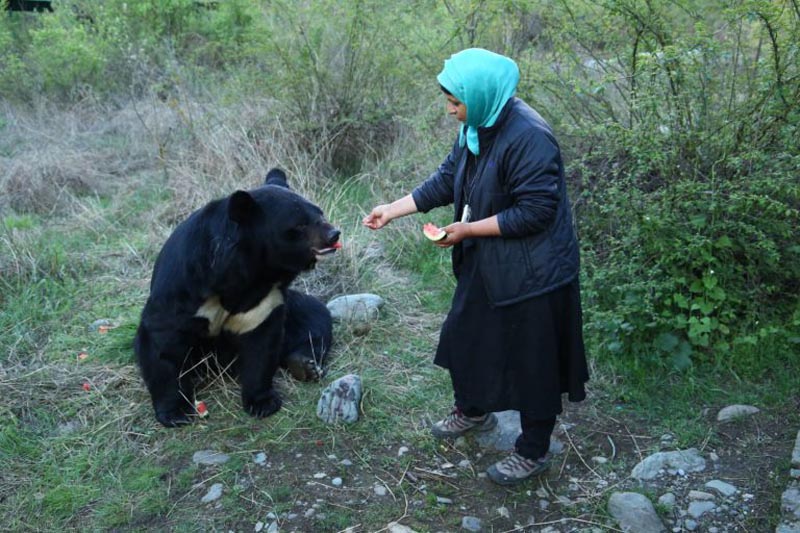 Hailing from the Wazir Bagh area of Srinagar city and a mathematician by education, Mir said she always had a soft corner for animals but never knew she would make a career of it. Right after passing out from university, she started teaching in one of the reputed schools of Srinagar for a few months. She married a veterinarian who actively worked for animal welfare and problems concerning wild animals, Mir said.

“We share the same philosophy as far as human-wildlife conflict is concerned. We believe that it can be effectively reduced by educating people, spreading awareness on wildlife and working to change people’s attitudes,” she told Mongabay-India. “The synergy has helped me a lot and has made it possible for me to convert my passion
into a career as a wildlife conservationist along with the support and the inspiration of the organisation (Wildlife SOS),” she said. “Over the past 13 years, my interest in helping wildlife has grown, and today I enjoy my work to its fullest,” she added.

About the wildlife conservation scenario in Kashmir, Mir said, “We have to be optimistic about the conservation of wildlife in Kashmir. I won’t say things are getting worse, but they are also not moving fast in the right direction.”

She said that she is impressed by the interest shown by the younger generation in wildlife. “I have a high hope from the younger generation who does understand the importance of wildlife and wants to conserve it. They ask very good questions about wildlife and are always keen to learn how to play their bit in conserving wildlife,” she said while recalling her interactions with young students in training sessions in different schools and colleges. But she agreed that the entire population has to get involved in conserving nature “It is crucial that we spread awareness amongst the public on issues of conflict mitigation to sensitise people and encourage them to be more tolerant of wild animals.”

‘How can a woman rescue animals?’

While working on wildlife rescues, one often comes in direct contact with the wild animals. During such operations, the attitude of people, especially those who happen to be around, can be challenging. 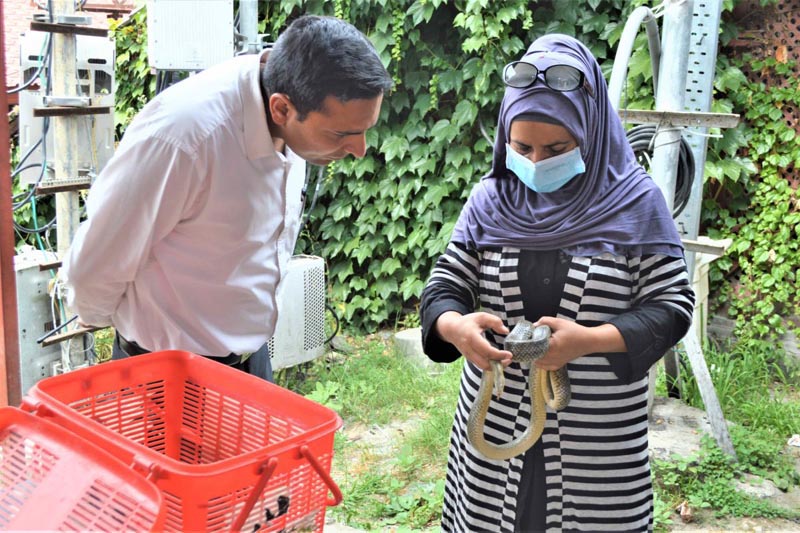 A snake rescued by Mir before releasing it in the wild. Photo by Wildlife SOS.

“Once I land up at the place where the rescue operation has to be carried out, people start looking at me and pass remarks saying how a woman can rescue wild animals,” she said.

“I had people telling me, in fact commanding me, several times, “Madam aap side main ho jayain, aap kay liyay mushkil ho jayaga (Madam, please step aside. This will be difficult for you)”. But when I finish the job, often with consummate ease, they are wonder-struck,” Mir told Mongabay India.

“I feel changing the attitudes of the local communities is more difficult than rescuing wild animals, especially when the goal is to get people interested in saving wild animals that have historically been damaging to their property or threatening to their wellbeing. Interactions can turn ugly, which indeed is a difficult challenge to handle. Also, the working conditions in a place like Kashmir, which can have hostile weather, difficult terrain, and a fragile political situation, make things challenging in my role.”