With the landing of NASA’s Perseverance Rover on planet Mars recently, lots of things are  surely going to change for space research and exploration in the near future. But why this race to reach the Red Planet by different nations? Will our astrologers warning of dire consequences of angering ‘mangal- graha’ have a different take now, wonders Ranjita Biswas

Wear a prabal or red coral stone to ward off the unfavourable effects of planet Mars or mangal graha, you often heard  while growing up when a practitioner of the Indian astrology visited the house and did a palm reading. You learnt that the Red Planet symbolises war and conflict and if one, unfortunately, happens to suffer from the angry eye of the graha, appeasing its ruler is imperative.

Now that NASA’s Perseverance rover has landed on Mars on 19 February after overcoming the ‘seven minutes of terror’ before the feat, what will be the advice of soothsayers, one might wonder. In our astrology, the nine planets- navagraha, hold sway over an individual’s fate one way or the other, you are told. So when science breaks into its domain it is bound to become a little confusing. This is the first high-resolution, color image to be sent back by the Hazard Cameras (Hazcams) on the underside of NASA’s Perseverance Mars rover after its landing on Feb. 18, 2021.

Anyway, Space has always fascinated men. For a very long time, the Red Planet has generated more curiosity among the general public and scientists than its other siblings. Is it because it  seems  more like ‘ours’?  Sci-fi fiction writers have also been attracting readers with plots where little Martians invade our planet or gobble up the living beings.

In 1957, when Soviet Russia shot off the Sputnik, the first artificial Earth satellite, it seemed almost unimaginable that man would land on another planet one day. Then the Moon landing happened. The “giant step” for humankind has now led to Mars. It is a salute to the human brain and aspiration, of course. After all, Perseverance is not just another space mission. It is a cutting-age mobile laboratory and  most expensive as well. The information it is going to beam to the earthlings could well define the next course of action in the field of  Mars exploration.

Questions, however, bubble up. Why has such an expensive mission been undertaken while our Earth, God knows, has many issues that deserve urgent attention? Why are UAE, China, etc. competing in a race to reach Mars? India’s 2014 Mangalayan mission spacecraft successfully entering the atmosphere of Mars, the first Asian nation to do so,  keeps up the hope that one day a  bharatiya would set foot on the Mars surface.

Scientists offer different reasons- that Mars could prove to be more habitable in the long run compared to other planets in our solar system. Remember Matt Demon (as astronaut Mark Watney) in The Martian  where he is left behind by crew members as he was thought to be dead after a fierce storm, survives, and grows potatoes? So art foresaw a future that science could make possible one day? 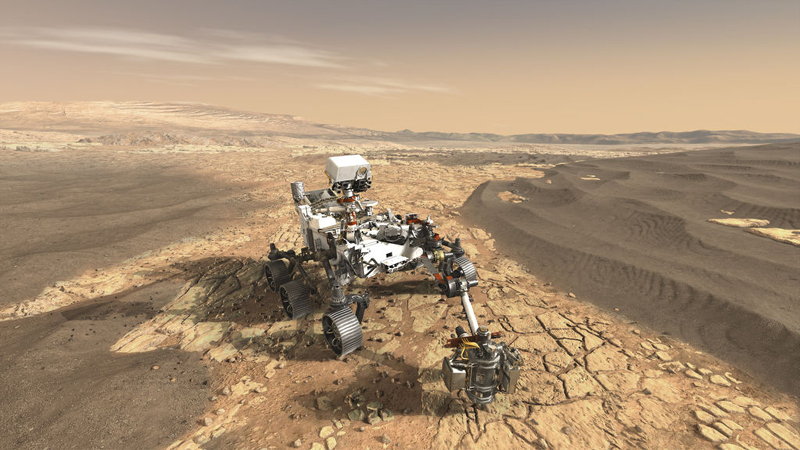 In fact, in some labs simulated as Mars’ surface condition scientists are now experimenting with growing vegetables. Even some billionaires are now investing in space expeditions. So is it an attempt to establish a colony in outer space a la scenario from the Star Trek series?

In its early formative years, roughly around four billion years ago, the conditions on Mars were quite similar to that of Earth humid and with the presence of water. Life evolved on Earth 3.8 billion years ago. But Mars is a fallow land now, its lake dried up and the river shrunken as scientists demonstrate through photos taken earlier by other missions. Among the positive vibes the Perseverance landing has evoked when the world is devastated by  Covid 19, and unusual weather patterns- the terrible ice storm in Texas being the latest one blamed on  global warming, a sober thought is bound to come up. Is this what we are going to do to our green planet with our thoughtless exploitation turning it into a red desert like that of Mars now? Is this why we want to acclimatise before the crunch?

Mangal graha, what do you say? Are you going to welcome these two legged creatures with huge brains to set up home on your surface? Will wearing the red coral lose its meaning as you become more  friendly to us?