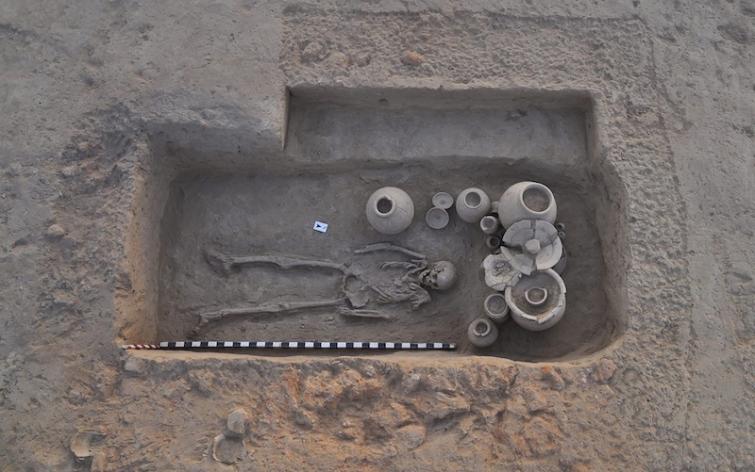 Rakhigarhi Findings: The Truth about our Ancestors

Challenging the famous theory of an Aryan invasion  ending the Indus Valley Civilization (IVC), analysis of DNA samples obtained from the skeletons excavated at the Mature Harappan cemetery at Rakhigarhi in Haryana says no mass migration into South Asia had happened during the Harappan times. Sonali Jha Chatterjee reports

As students we have had to learn about the Indus Valley Civilization. It was after all one of the four ancient civilizations of the world.

Harappa and Mohenjo-daro to me were ideal cities which took care of its people and surroundings. The great bath, the granary, the regular patterned houses, with straight roads, the topnotch drainage system, the exquisite pottery, all of these coupled with the mysterious language with which we struggle even to this day, made me fall in love with ancient history.

I often wondered how a civilization as great as this could suddenly buckle down and vanish when Aryans came to conquer them. It now seems that science has proven history wrong.

This article is based on analysis of DNA samples obtained from the skeletons excavated at the Mature Harappan cemetery at Rakhigarhi in Haryana and clearly refutes the argument that a mass migration into South Asia had happened during the Harappan times. 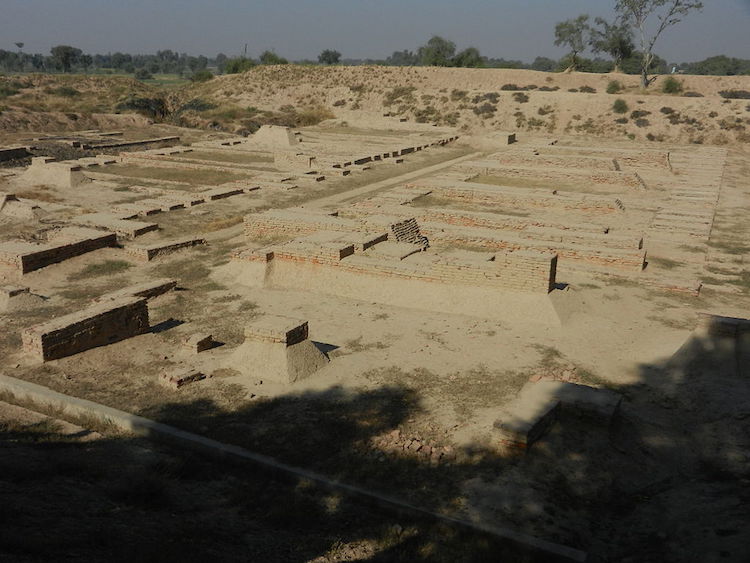 A view of Harappa's Granary and Great Hall /Wikipedia

Latest research methodologies and instrumentation have been put to use to study the Harappan population. Genetic analysis conducted on the skeletal remains from the Rakhigarhi cemetery show an ancient genome from the Indus Valley Civilization (IVC). This individual’s genetic makeup shows a mixture of people related to ancient Iranians and Southeast Asian hunter-gatherers.

About 12000 years ago, Iranian related ancestry in south Asia came from a lineage that separated from ancient Iranian farmers and hunter gatherers before the groups split from each other.

Had there been a mass migration from the west to the east, the genetic studies would have shown the predominant DNA quite clearly. The genetic pool shows a predominantly indigenous ancient civilization contradicting the theory of the movement of western Iranian farmers to the east. Instead, sampled ancient genomes from the Iranian plateau and IVC show a descent from different groups of hunter-gatherers who began farming and domesticating animals independent of the Steppe pastoralists or Iranian fatmers.

These findings came to light after years of archeological and genetic work on the Rakhigarhi project. The archeological team was led by Prof Vasant Shinde of the Department of Archaeology, Deccan College Post-Graduate and Research Institute, Pune, while the genetic study team was led by Dr Niraj Rai from Birbal Sahni Institute of Palaosciences, Lucknow and Prof David Reich from Department of Genetics, Harvard Medical School, Boston.

Today, we can safely say that domestication of plants and animals, basic science and technology, settled way of life and urban planning came from the inhabitants of the Indus Valley Civilization. We find evidence of one of the first large scale urban societies of the ancient world with systematic town planning, elaborate drainage systems, granaries and standard weights and measures. The IVC thrived in urban centres like Harappa, Mohenjo-daro, Rakhigarhi, Dholavira and Ganweriwala of which the largest is Rakhigarhi.

Prof Shinde finds it rather strange that for many years archeologists and historians seem to have neglected evidence of farming and domestication of animals in various Harappan settlements that were excavated.

Mehrgarh and Farmana are two of the many sites that show these origins as far back at 7000 BCE when the population was moving towards agriculture. Wheat, barley, pulses and oil seeds were grown and cattle, sheep and goats were domesticated.

Carpentry tools, beads, pendants have been found at these sites. Interestingly, shells and precious stones were imported from far off places and used in exquisite jewellery. Later, they began to develop the art of pottery and seals and terracotta art made an appearance. As they perfected this art, classical Harappan pottery like the perforated jar, globular pot and jar, dish on stand and beaker were introduced.

Similarly, structures of habitation began to change as technological skills developed. From circular huts known as pit dwellings made of mud, wattle and daub, they moved to squarish and rectangular structures made of bricks with separate rooms for storage, bath and toilet. From haphazard houses, they moved to houses on straight roads with covered drains.

From 2500 BCE till 1900 BCE, the Harappan civilization was trading with the Mesopotamian and Egyptian civilizations. They had developed their textile and silk industry, jewellery, tools, agriculture, the science of Yoga and Ayurveda, constructed well planned cities. The knowledge base that this ancient civilization created continues to affect the lives of South Asians to this day.

There is convincing evidence of the hunter gatherers of south Asia gradually shifting towards urbanization and a settled way of life around the middle of the third millennium. During this entire development of the Harappan civilization, there is no evidence of migrants coming in with their culture and imposing it on the population here.

The ancient DNA results have led to a rejection of the mass human migration and invasion theory during the Harappan period from Central Asia/Iran. The genome study has shown an absence of steppe pastoralists or ancient Iranian farmers coming in from the Fertile Crescent, in the genetic makeup of the Harappans. The hunter-gatherers of South Asia have an independent origin which continues till today. In fact, these genetic studies have shown that the Harappans are ancestors of most of the population of South Asia.

It is interesting to note that the invasion theory was built on the discovery of skeletal remains excavated in the upper part of the Citadel area in Mohenjo-daro. Archeologist, Sir Mortimer Wheeler, then hypothized that there had been a massacre of the Harappans by invaders. Later studies have however shown that the skeletons showed no injury marks. But the fact that these skeletal remains were found in silt deposits shows that the deaths occurred due to floods, which was not unusual in that area.

The insights from the genetic study material available to us today is from a single sample from Rakhigarhi and 11 samples from Gonur in Turkmenistan and Sahr-i-sokhta in Iran. Research has indicated that there has been a movement of people from the East to the West and not the other way around as is widely believed. This ties up with the fact that the Harappans were moving towards the west, trading with their neighbours.

Over the next few years, the world will look towards a more focused approached towards the retrieval of ancient DNA samples and analysis of a larger number of individuals from various archeological sites of the Indus Valley Civilization which could transform our understanding of history.