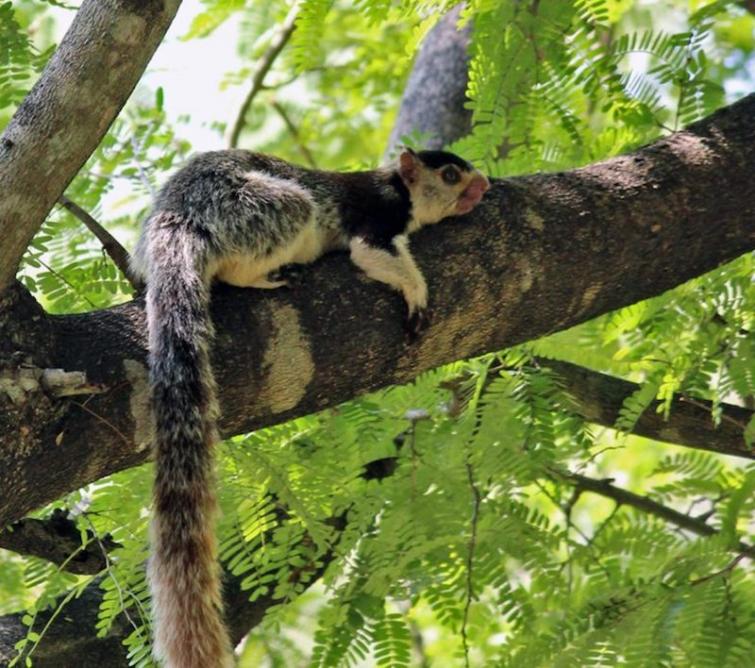 The clear and present danger to India's grizzled giant squirrel

The grizzled giant squirrel struggles to survive in the face of habitat loss in India. Mongabay-India writer Manupriya reports

For about a year now, P. O. Nameer and Kiran Thomas have been walking the slopes of Chinnar Wildlife Sanctuary in Kerala looking for a special kind of squirrel. Called the grizzled giant squirrel, this squirrel has a body length of 25-45 cms, with an equally long or slightly longer tail. It can weigh anything between 1.5-3 kgs.

To put that in context the common squirrel we see around our homes, called the Indian palm squirrel, weighs about 150 gms and is 23 to 35 cm in length, inclusive of the tail.

The grizzled giant squirrel has made its home in riverside plants growing in the sanctuary for centuries. Two rivers – the Chinnar and Pamban – weaving through the sanctuary create the perfect riverine habitat preferred by them. And yet, the year-long survey by Nameer and Thomas revealed that a mere 15-24 grizzled giant squirrels now inhabit the Chinnar Wildlife Sanctuary.

The researcher duo from the College of Forestry, Kerala Agricultural University, Thrissur, has published the results of their survey recently in a paper, where they say that the population has declined by 78–85 percent from previous estimates in 1993 and 2007.

Though the Indian giant squirrel and the GGS are both found in southern India, their habitat requirements are quite different. The Indian giant squirrel is a generalist and “is seen in a wide variety of habitats from the deciduous forests to evergreen forests to shola forests,” said Nameer. The GGS, on the other hand, is entirely dependent on riverine vegetation, the kind that grows along the rivers, to thrive.

Like other rodents, the GGS plays an important ecological role in seed dispersal. They live on the canopy of forest trees and have a preference for tamarind and mango. They also feed on the leaves and bark of the trees. A decrease in canopy cover not only decreases the amount of real estate available to them but also exposes them more to their predators.

The GGS faces a variety of threats. For example, in the Cauvery wildlife sanctuary which sustains a small population of GGS, “the riverine forests are used for picnics. People even gather firewood and cook under the canopy of the riverine forest. In addition, there are natural predators like the black eagle (Ictinaetus malaiensis), changeable hawk eagle (Nisaetus cirrhatus), python (Python molurus) and leopards (Panthera pardus),” said A.J.T. Johnsingh, eminent wildlife biologist at the Nature Conservation Foundation. In Chinnar, particularly, the problem is “the extremely restricted habitat,” he added.

Another significant threat to GGS at Chinnar comes from the “pilgrimage at Kodanthur temple which is situated within Anamalai Tiger Reserve along the Chinnar river,” said A. Veeramani of Department of Zoology, Government Arts College, Kumbakonam. Veeramani too has been studying the status and distribution of Grizzled Giant Squirrel in Chinnar Wildlife Sanctuary. 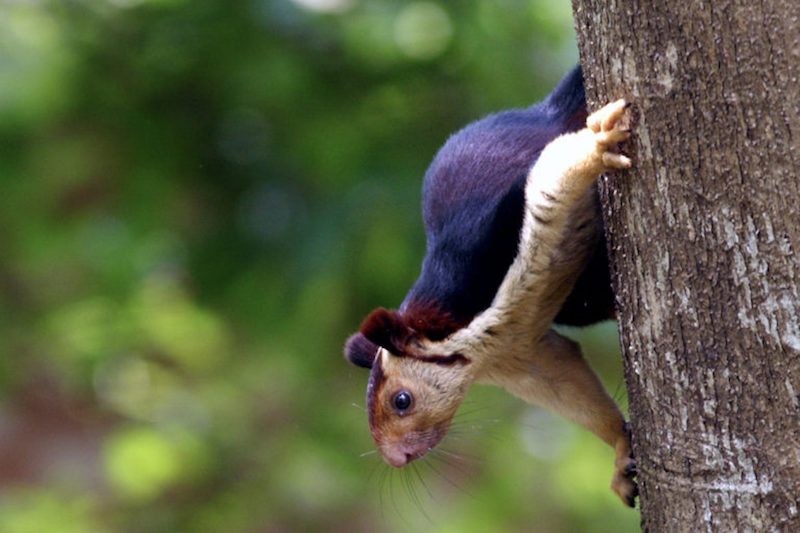 During their forays into the Chinnar Sanctuary, Nameer and Thomas made an interesting observation. They spotted some giant squirrels that looked like inter-species hybrids between the grizzled giant squirrel and the Indian giant squirrel. These hybrids could be identified because they showed a mix of skin colour from both types of giant squirrels. Other sources, such as here, have also noticed these inter-specific matings. Though the exact reason for the existence of these hybrids is not known, Nameer said, “it is not a healthy sign for either of the species.”

Inter-specific hybrids are relatively uncommon in nature. The biological definition of a species is a group of individuals that can mate to produce fertile off-springs. When animals cross the species barrier to mate the hybrids are mostly infertile (for instance the mule, a hybrid of horse and donkey). However, instances of fertile hybrids that evolved into new species have also been reported in the past.

Matings between the GGS and the Indian giant squirrel were “first seen by Justus Joshua in the Ayyanarkoil valley in the Rajapalayam hills which is part of the Srivilliputhur Grizzled Giant Squirrel Sanctuary,” said Johnsingh. Chances of such “hybridisations increase when two closely related species occur together in one location,” he added.

As of now, we know very little about these hybrid giant squirrels. “Detailed investigation on the fertility status, exact reasons for hybridisation, and a study on the genetics of the GGS need to be undertaken at the Chinnar WLS to find out the genetic purity of GGS there,” said Nameer.

“The mix-up and hybridization between the GGS and Indian giant squirrel should also be monitored, to find out its effect on the long-term survival of the GGS, which has a restricted distribution. Being a near-threatened species, the interbreeding could be a challenge to the long-term conservation of the grizzled giant squirrels at Chinnar wildlife sanctuary,” he added.

While on the one hand, a decline in the population of GGS has been recorded, on the other hand, reports of new sightings from areas where GGS was never seen before are also coming up. Earlier this year in January, a group of researchers from Pondicherry saw a pair of GGS in Pakkamalai reserve forest in Villupuram district in Tamil Nadu. The researchers also observed seven dreys (squirrel nests). The Pakkamalai forest is an offshoot of the Eastern Ghats, and this is the first time GGSs have been seen in this area.

The exact reason behind these “random and scattered sightings” is “unknown and needs to be investigated,” said Nameer. Johnsingh said the reason behind new sightings could simply be that “people may not have looked for it.” Whatever the reason, it is clear that several gaps exist in our understanding of GGS’s habitat range.

Without more studies and improved understanding, effective conservation strategies for GGS cannot be devised, and the species will continue facing threats. “If the GGS is wiped out from Chinnar, then the Sanctuary will be poorer by losing one of its mammalian species,” said Johnsingh.