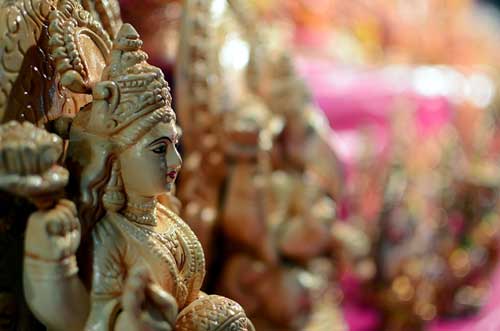 India Blooms News Service | | 07 Oct 2014, 12:10 pm
#Lakshmi Puja today, # Bengal Lakshsmi Puja
Kolkata, Oct 7 (IBNS): With the sound of 'dhak' silently fading in the air with a mood of gloominess prevailing in the air with the end of the grand festival of the Bengali community-the Durga Puja- people of Kolkata and the rest of West Bengal once again geared up to taste the flavour of festivity by welcoming the Goddess of wealth, Ma Lakshmi, with customary rituals on Tuesday.

Though most of India worships  Lakshmi during the day of Kali Puja and Diwali -- the festival of lights, in Bengal it is observed earlier, on the first full moon night following the Durga Puja.

Being much smaller in scale than the magnanimous feats that Durga Pujas turn out to be here,  Lakshmi Puja is performed in innumerable Hindu families.

The puja is carried out ceremoniously at home, often collectively among neighbours and relatives, as people gather to pray for the goddess' blessings.

Usually done in the evening, the rites for the occasion are often performed by hired priests or sometimes even by the housewives themselves.

Homes are decorated with floor patterns made of ground rice and water known as 'alpana' or 'rangoli' and 'S-shaped' footprints are made to symbolize the the goddesses visit to replenish the wealth and prosperity of the homes.