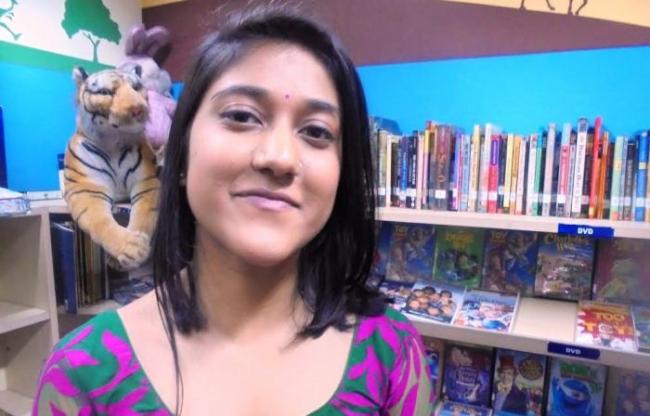 India Blooms News Service/TWF | | 21 Jan 2017, 01:21 pm
#LangnajitaMukhopadhyay, #AmericanPoet, #FemalePoet, #Poet, #LaureateNashvilleTennessee, #ThisISOurWar
Langnajita Mukhopadhyay is the First Youth Poet Laureate of Nashville in Tennessee, USA. But she is also firmly rooted in her Bengali identity and straddles both worlds through her sensitive poetry. Ranjita Biswas meets the young poet on her recent visit to Kolkata

The monsoon rain in Kolkata, everyday vendor calls on the city’s streets, even street dogs howling at night, find resonance in the poems of Langnajita Mukhopadhyay, though the budding poet now lives in Nashville, Tennessee, in far off North America. “I left the country when very young with my parents but regular visits to my didai’s (grandmother) house has kept me connected with this land,” she said on a recent visit to Kolkata as she shared her thoughts- and poems, in a reading session at the American Center.

Langnajita is still very young, a first year student, in fact, at the Belmont University. But her poems in the debut collection, This is Our War , has already made waves. In 2015, she was declared Nashville’s First Youth Poet Laureate and next year, the Southeast Regional Youth Poet Laureate after a tough contest. She was also one of the talented young people invited by Michelle Obama to the White House to read her original work.

War, both in physical and metaphorical term, figures prominently in her poems : I find it hard to believe we are still fighting”. After all, We all come from the same yellow box. Like many young people she rebels against the conflicts and strife that are tearing apart the world today but her rebellion is expressed through words.

She feels that writing has given her a platform to talk about issues which trouble her, and people of her generation. Like the poem Tsunami on climate change and global warming: I also do not want to become a tsunami . She wants to use her voice as a poet to question and protest:  They can’t block my voice/ there will whispers.

Langnajita is well aware of  her roots. She speaks fluent Bengali without an accent and is familiar with literature of the land. This is Our War has four sections: the Daughter of Gun chapter begins with a quote from Rabindranath Tagore: Loaded Youth has a quote from Netaji Subhas Chandra Bose (‘Give me blood  and I promise you freedom’ ) : Battle Scars begins with a quote from the Bhagwat Gita and the Army of Voices with quotes from Mahatma Gandhi.
But she is also a typical teenager living in the US and enjoys the diversity of her city, and country. Nashville is renowned as a ‘Music City’ and she at first thought of writing lyrics for songs.  One reason is because she herself plays a number of instruments -guitar, violin, mandolin, etc. A significant influence is her mother who is a scientist but an expert dancer and singer too. Ma is Lagnajita’s gratitude poem to her. Her father is a journalist who relocated to the US for his daughter’s sake. She, in fact,  has written as poem as a ‘tribute’ to journalists  News travels fast…it’s a tricky trade…admiring “their honesty.”

Lagnajita is hugely grateful to her parents for letting her develop her interests, instead of pressing her to take up some subject in the science stream. “It can be as common among Indian parents out there, as back home here,” she observes.

Ironically, the young poet’s creative juice thrived in an atmosphere of feeling isolated. “We moved to a locality in Nashville which was not very safe straight from the crowded streets of Kolkata. So I read and read and wrote anything I felt like to fill in the long hours staying at home. Soon it became my companion- my pen , my paper,” Langnajita says. She still feels a closeness to the old method of writing, in longhand and transferring the same to her laptop. But she also has her phone with her, like any young person today, to read and put her thoughts whenever the urge surfaces. 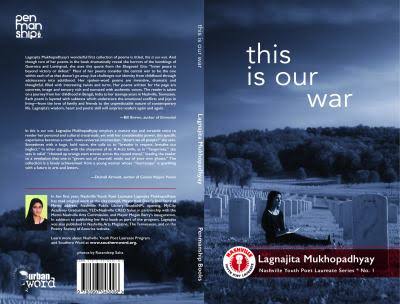 “Yes, racism is still there. My skin colour sometimes evoked comments, as it has happened to many others. But I suppose my parents faced it more when they arrived, for their strange clothes, strange accents. We young people are much more at ease with the diversity,” she says.

The young poet firmly believes in “Art for art’s sake” and considers herself  a  ‘performance poet.’

However, finding a readership for poetry would seem rather tough today when even the newspaper is becoming redundant for this generation in countries like the US. “That’s true. People of my generation usually don’t read much, let alone poetry. But the curriculum in the country is designed such that you have to read some and be familiar with literature. That’s a plus point,” Langnajita says.

Meanwhile,  she is preparing for the National Youth Poet Laureate Final next April  where her project revolves around religious tolerance. She is also planning her next book of poetry.