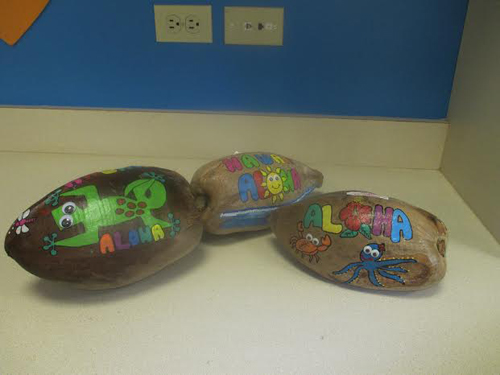 Trans World Features (TWF) | | 15 Jul 2014, 12:33 pm
#Here comes the coconut express
The postman comes knocking with a coconut, literally, because this is the way letters are sent from this unique post office in a Hawaii island, Rekha Pal discovers

In these days of emails, instant messaging, posting a letter is almost history. So how about posting a self-designed coconut instead?

You can do that fast and easy from the Ho’olehua post office on the island of Molokai in Hawaii. 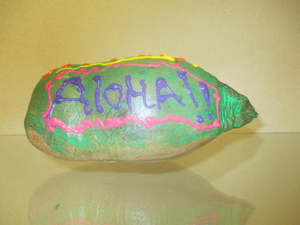 With the service termed ‘Post-a-Nut’, you can effortlessly send a coconut to your nearest and dearest one by designing them or writing whatever you want with coloured pens, markers etc. which are freely available at the post office. You don’t even have to buy the coconuts. They come for free. You only have to choose them from among the many lying there. One has to only pay for the postage costs ranging from $11 to $15 to the US mainland and more for any other parts of the world. The postage fee also depends on the weight of the coconut.

Molokoi is a small island with an area of 670 sq km. The fifth largest island of Hawaii, Molokai lies east of Oahu island where lies Honolulu, the capital of Hawaii islands. The lights of Honolulu are visible from the west end of Molokai at night.

The island of Molokai remains true to its island roots-it has its pristine beaches, breathtaking tropical landscape, environmental stewardship, rich and deep Hawaiian traditions (Molokai is said to be origin place of Hula dance) and of course, the unique post office.

For years, Molokai residents have resisted tourists and it is also the least populated among the islands of Hawaii.

There are no traffic lights in the harbour town of Kaunakakai where fishermen haul in their daily catch and farmers showcase freshly-picked produce from neighboring fields.

In Molokai island’s  Ho’olehua village stands the quirky little Ho’olehua Post Office, housed in a small brown building located on a sleepy street of brick-lined houses amongst dusty red fields. It looks like the usual post office from outside but is actually a creative den inside. People come visiting here hearing about its unique Post-a-Nut scheme. Then they just let their hair down and imagination runs riot. Giving vent to their artistic instincts on the coconut, they share their feelings for their loved ones.

The Post-a-Nut idea came to former postmaster Peggy Keahi-Leary in 1991when she saw hundreds of coconuts from the Kapuaiwa coconut grove lying strewn on  the roads and simply going waste. The vast grove with the Pacific Ocean as a backdrop, is one of the oldest and largest in the island and under the care of Hawaii’s Exceptional Tree Program.

The story goes that King Kamehameha IV planted a thousand coconut palms there in 1860s, one for each of the warriors in the army.

Peggy kept thinking about the coconuts going waste and hit upon the innovative idea of mailing them to extract a few smiles from its receivers.
She put up a sign at the airport advertising her idea and business began to flourish.

From this post office you can mail a large, round coconut that makes a sloshing sound or small, oval shaped one. Writing your message, you should leave a little space for the address and postage stamp.

Gary Lam, the present postmaster says jokingly that he is an official authorised coconut inspector. Gary took over ten years ago when Peggy retired. Since then Ho’olehua Post Office has tripled its revenue.

Some visitors paint pictures, some write love sonnets, some transform them into birthday cards or wedding invitations. 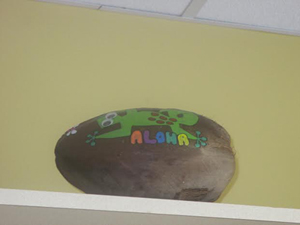 Traveller  Placido D of Tuscon, Arizona writes on Trip Advisor online travel website (the Ho’olehua Post Office is Trip Advisor’s number one thing to do on Molokai): “I've never had so much fun at a Post Office. The postman has someone bring in dried brown coconuts so customers can have a nice selection to choose from. If you prefer, he also knows a gifted painter that, for a fee, can turn a coconut into anything your mind can imagine...Nemo, a humu humu triggerfish or a gorgeous tropical scene. The professionally painted samples on display at the post office are truly impressive. He applies postage in a creative manner by choosing many beautiful stamps and affixing them wherever there's a blank area. Cool!”

Element Trent of Alberta writes : ”This is a great idea and unusual souvenir of Molokai. Sending the coconuts isn't as expensive as you’d expect, and they can be sent anywhere in the world. This is definitely a ‘don't- miss’ place on beautiful Molokai.

Gary says that more than 40,000 coconuts have been mailed so far since Post-a –Nut began mostly to the US mainland, Germany, Austria and Switzerland but also far away to a research station in Antarctica, Nepal, Namibia and Scottish Highlands. Even to places where they had never seen a coconut before, like a small town in Japan.

The idea may be nutty to some but the coconut express from Molokai seems to be going great guns- till the coconuts keep falling.

Images by author, the image of Hawaii from Hawaii Tourism.