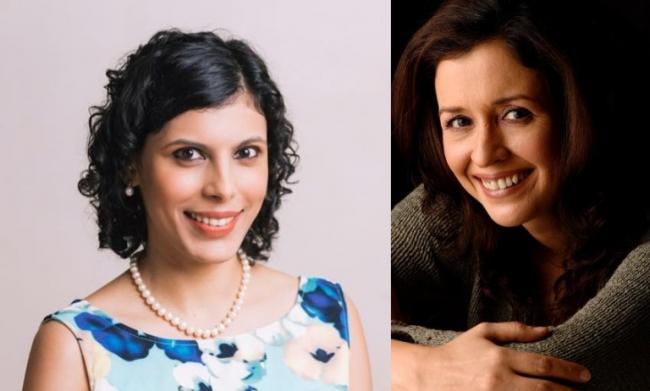 If people pay me enough Lola 2.0 is a possibility: Anuradha Menon

India Blooms News Service | | 09 Sep 2016, 09:19 am
#Anj Menon, #Shernaz Patel, #Lola Kutty, #God of Carnage, #Play, #Indian English Play, #Kolkata
Anu Menon and Shernaz Patel are both household names in Indian English theatre. While the former shot to fame with her alter ego Lola Kutty, the latter boasts of films like Guzaarish, Black and Talaash in her resume. IBNS correspondent Sudipto Maity catches up with the two before the staging of their play 'God of Carnage' in Kolkata's GD Birla Sabhaghar, presented by Centre Stage Creations

The character you're portraying.

Anuradha Menon(A): Anette. She is in wealth management and very posh.

How different is this Indianised version from the original one?

S: This is the original play. It has not been adapted.

A: We haven't tampered with the original script.  This could be taking place anywhere and anytime between any two couples. It's geographically and ethnically indeterminate.


What's your take on the subject matter of your play? Do you think parents should get themselves involved in such a case? (The play is about two sets of parents, one of whose child has hurt the other at a public park  and as the parents meet to discuss,  their veneer of civility wears off.)

S: Yes, I think parents would necessarily need to get involved...however in this instance Veronica takes things a bit too far. This would be unadvisable! Watch the play to know more!

A: Depends on how grave the situation is between the children. After this play I've definitively decided to stop at one child!!


Shernaz, growing up in a theatre surrounding, do you reckon it came to you naturally?

I think exposure to theatre from childhood influenced me greatly. I was surrounded by theatre from when I was born and spent my childhood in green rooms, so my love and passion for it began at birth. I also watched theatre from such a young age...all this has led to who I am today.

Anuradha, Lola Kutty has been an integral part of your life (correct me if I'm wrong), but does it get irritating at times when people go at length about your alter ego?

Not at all. It's humbling. People recall her with so much love and affection. You can't resent something you created. But the Lola image definitely comes in the way of me getting item numbers (laughs).


How did Lola happen? You reprised your role in a couple of films. Do you plan to make a comeback?

Well if people pay me enough sure - Lola 2.0 is a possibility!

I moved to Bombay after going to drama school in London. The boss at Channel V liked me and said come hang with us. While "hanging" I realized I wasn't cut out to be a cool VJ. It would be so much fun to be the anti thesis of cool. Someone you would never pick to be on a music channel.


Shernaz, you have acted in some critically acclaimed films, if you have to choose one movie that represents your story/life, what would that be?

None...these are films with their own narratives...none of them were biopics.


A director you would want to have your biopic directed by. (You can name anyone. Living or dead. Bollywood/Hollywood/European/Others)

S: Meryl Streep would play me and it would be directed by Richard Eyre. :)

A: You're giving me way too much importance if you believe that anyone (my family included) would watch a biopic on me.

While on that subject, what would you want your biopic to be named?


What's next in store for you?

S: My theatre company Rage celebrates 25 years next year, so we are planning year round celebrations. We also complete 15 years of our play writing programme, Writers' Bloc, and we will be touring nine British Council centres (including Kolkatta) with these plays. Other than this I am in seven plays at the moment and our shows happen through the year and around the country. I am also in the web series Tripling which is on TVF at the moment.

A: I do a lot more stand-up comedy now while trying to raise my half Gujju (Gujarati) son while his father is on ship. I would like to get all Kangna Ranaut's rejected movie offers. She had really captured the curly haired market.