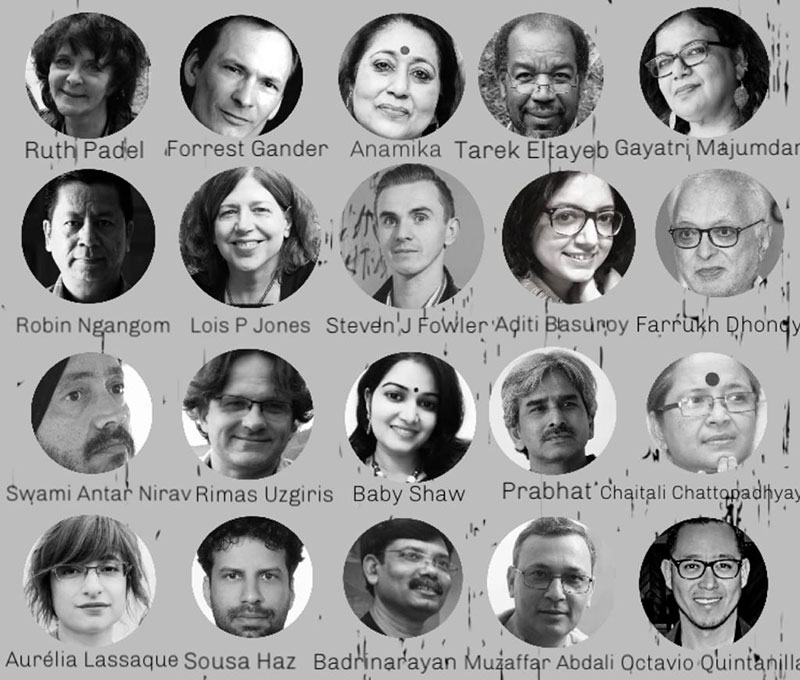 Eminent names from the literary world graced screens from countries like the USA, the UK, Lithuania, Brazil, Sudan, France, and India. All the participants across four days shared their reflections, perceptions, creative pouring in verses turning the early winter evenings enchanting. Many poets recited in their native languages followed by translations in English.

“It was very heartwarming and comforting to have such diverse voices amidst us during the course of this festival”, said Sonnet Mondal, director of Kolkata's International Poetry Festival.

On the inaugural day of the festival, award-winning London-based poet Ruth Padel read her poems from her book Emerald.  Pulitzer Prize-winning poet Forrest Gander presented three poems as poetry films from his book Twice Alive. Robin Singh Ngangom, a bilingual poet in English, and Manipuri who shared his poems with eloquence.

He was followed by French and Occitan poet Aurélia Lassaque read poems both in French and Occitan which is a less spoken language especially concentrated around Southern France, parts of Spain, and Italy. The last to read poems on day one was US poet radio host editor, Lois P Jones who read several poems including a few inspired by the life of Spanish poet Frederico Garcia Lorca.

Day two began with Poet-writer-photographer Octavio Quintanilla from St Antonio, Texas reciting poems in English and Spanish, followed by Gayatri Majumdar from Pondicherry who read poems based on the recent ravages of the pandemic and on the nostalgia of homecoming.

Lithuanian poet Rimas Uzgiris's poetry basically touched upon the theme of immigration. The next poetic voice to lighten up the screen was Egyptian Sudanese writer-poet Tarek Eltayeb who recited several of his compositions in his native Arabic. The day ended with poetry from London-based writer, poet, and artist SJ Fowler.